How can a deep-space spacecraft determine in real time the direction of delta-v?

My spacecraft knows it wants to add a certain delta-v in a certain direction to its motion, relative to the stars. It will calculate current mass based on propellant usage history, which hasn't been much so far, and it knows the engine's well-characterized thrust, so taken together, it knows that it needs to burn for a time T in order to produce the correct magnitude of delta-v.

Its internal contents tend to shift, so that the precise location of the spacecraft's center of mass is unpredictable. Luckily the engine is gimbaled, and it can adjust the gimbals continuously during the maneuver to make sure it keeps the center of mass directly on the thrust axis. It does this by detecting rotation with the star cameras and/or gyros and gimbaling to null the rotation.

How does my spacecraft know if the thrust is actually pointing in the right direction? The stars are very far away and there are no handy planets or asteroids nearby, so while it knows attitude, how can it determine that the direction of the delta-v vector is correct?

I suppose internal accelerometers (inertial guidance) that have been cross-calibrated with the star cameras would be one solution, and exchange of radio communication and doppler information with Earth would be another.

Is that it? Inertial sensors and doppler, or is there any other currently used deep-space spacecraft technology that can measure the direction of delta-v in real time? 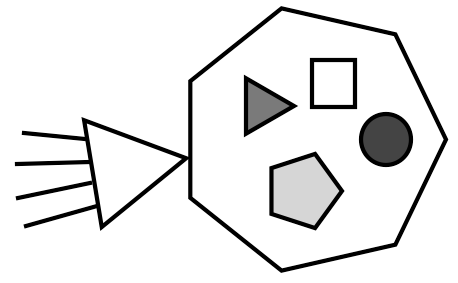 I see the caveat of your question... and simultaneosly, I don't.

Solution: as craft tries to turn, this is detected and compensated by engine gimbal, so that the thrust vector always points through CoM, unless it's compensating for the tilt right now.

Side effect: discrepancy between heading and bearing; thrust misaligned with ship's geometrical axis (which is misaligned with the misplaced CoM), propelling it in a different direction than originally intended.

Resulting problem: how to determine the value of the error - shift in velocity vs intended?

Solution: using exactly the same software that is used to drive the gimbal.

You know the value of thrust (force), you have a very good idea about mass (fuel mass flow and ship's total mass), and you know the direction of thrust at any point of time, along with direction of the exhaust-CoM vector (calculated from shift vs stars, necessary to drive the gimbal operation.)

How does my spacecraft know if the thrust is actually pointing in the right direction? The stars are very far away and there are no handy planets or asteroids nearby.

That the stars are very far away is a huge advantage. Parallax will not be an issue for a star tracker that looks for distant bright stars, at least not within the solar system. The inherent errors in even state-of-the-art star trackers are significantly larger than the errors induced by parallax. Parallax might become an issue in the distant future, but by then our children's children's spacecraft will be using quasar trackers.

So while it knows attitude, how can it determine that the direction of the delta-v vector is correct?

In many cases, the spacecraft does not know that the direction of the delta-v vector is correct. Their flight software is rather primitive. Deep space probes typically receive delta-V commands from Earth. These spacecraft have rather limited autonomy and intelligence, and simply execute the commands transmitted to them. Suppose the Applied Physics Lab had mistaken commanded the New Horizons spacecraft to perform a maneuver that would have made that spacecraft smack into Pluto. The spacecraft would have done exactly what it had been commanded to do.

Making a spacecraft truly autonomous is a task for the next generation of rocket scientists. For now, autonomy is limited to those phases of flight where intervention from Earth is impossible. This includes automated rendezvous; automated entry, descent and landing; and autonomous pointing (e.g., New Horizons pointing towards Pluto). In all of these cases, the vehicle will have more than the standard set of navigation sensors, and the flight software will be rather complex.

Generally a spacecraft will use a gyroscopic inertial platform — a set of powered gyroscopes holding a fixed orientation in space, mounted in nested gimbals allowing the spacecraft to rotate around it. The relative rotation of the gimbals is measured several times a second to determine the direction the craft is pointing and how fast the direction is changing, which lets the guidance system adjust the engine gimbal to keep the craft on course in a continuous feedback loop.

I understand your question can be summarised into, how exactly one knows in Inertial frame where one is moving. I understand there are subtle caveats here.

So suppose I know in Inertial frame where I need to fire and onboard can be aligned to this frame using Inertial sensors. Now question is how does one know exact alignment of star sensor to body? and gyro to body? and accelerometer to body? These small misalignments which can be slightly different from ground measurements can not be measured but only statistically corrected such as by rotating spacecraft and comparing values of star sensor and gyro for example.

So once this calibration is done. We only have to see, whether by giving delta-v spacecraft is in ground calculated state vectors or not. Otherwise one can keep the variable which accumulates inertial acceleration and downlinks to ground.

For such inertial navigation integrator one needs a gravity model and any other forces if present.

Not the answer you're looking for? Browse other questions tagged navigation guidance gimbaled-engines or ask your own question.

19
How did the attitude system of the uncrewed Soyuz 7K-OK No.1 fail on the launch pad in 1966, killing ground staff as LES was activated?
7
Spacecraft Navigation
4
single thrust vs. multiple thrust
5
What are the future prospects for spacecraft autonomy
3
How exactly do "commanded delta-v burns" work in practice? (e.g. OSIRIS-REx)
4
How do you calibrate the accelerometers of an IMU in space, outside the GPS range?

25
How can spacecraft navigate without contact from Earth?
20
How did NASA determine the distance and velocity of voyager 1?
3
Is it pretty much a given that all deep-space spacecraft have gimbaled engines?
11
How is the trajectory of spacecraft transferring between planets monitored?
4
How are rockets gimballed to produce a gravity turn for the space shuttle?
6
Is NICER/SEXTANT the first civilian "spacecraft" to determine it's own position in space without GPS or uplinked data?
4
Help understanding BepiColombo's weak capture at Mercury's L1 and need for delta-differential one-way range measurements
8
Apollo-11 delta-v "due to residual pressure in the docking tunnel pushing the spacecraft apart" detected as it happened? Was it corrected?
10
Could Apollo's Sextant navigation use similar geometry as Marine Navigation?