What publishing authority (and year of publishing) was the first to use the term 'occultation'?

Researching the word occultation, it is evident that it is a newly incorporated term in respect to space and eclipses. It just recently began to populate space periodicals and online articles, but hardcopy publications are rare. Possible leads may include the US Department of Defense, US Department of Education, etc.

What authority first commissioned the word 'occultation' in respect to space and transits of bodies?

A search for 'occultation' through the English books indexed for Google's n-gram viewer suggest the term has been in use since from around 1710, with an earlier spike in the 1650's: 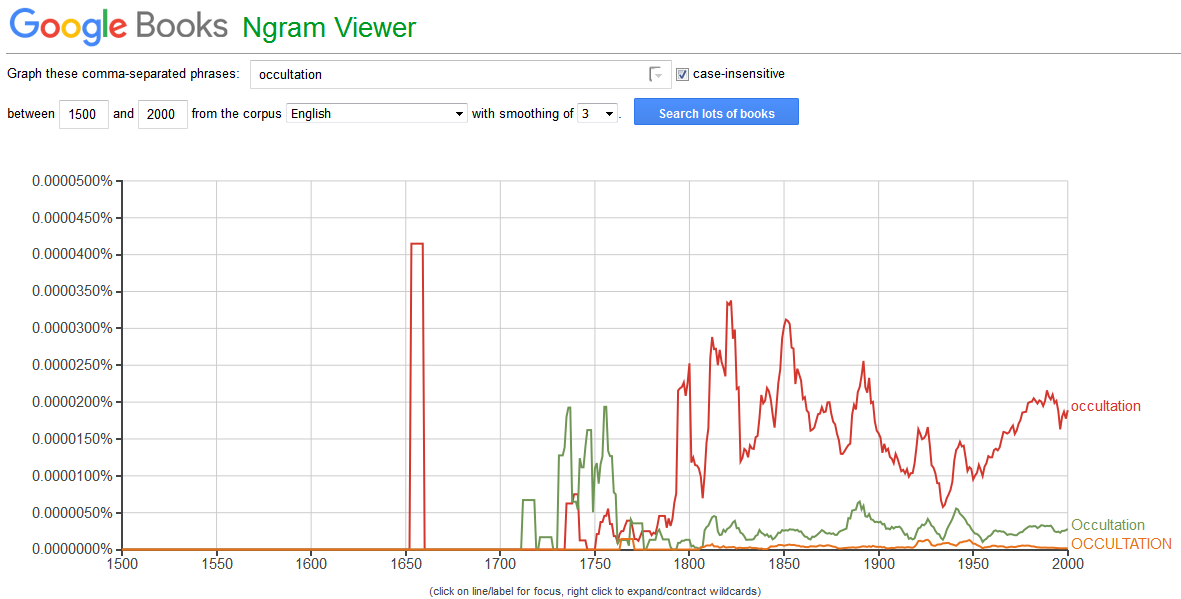 * Not necessarily as a noun, maybe as the conjugation of a verb

It was not "commissioned" in any sense; the word has been around for that purpose in scientific discourse for a very long time. See, for example:

The Occultation of the Planet Mars by the Moon, Observed by Mons. Hevelius, Mr. Flamstead and Mr. Hally, Philosopical Transactions of the Royal Society, 1676.

(Yes, those are the astronomers you think they are...)

In this case, it is in Latin ("occultiato") but the English form was in use in print a few decades later (eg 1736) and would certainly have been understood by contemporaries.

In the Latin literature of the late Middle Ages I have found a very interesting development of the use of the word "occultatio", away from a rhetorical one towards one involving light and darkness. Originally, occultatio means "the act of putting away or of hiding something". One finds it most often in the sense of "hiding a truth" or of "hiding oneself" (Caesar in De Bello Gallico, Cicero in a letter to a friend, Arnobius in Adversus Nationes, Tertullian in De Paenitentia). This continues beyond the so-called dark Middle Age: Aelred of Rievaulx, in his famous De Amicitia, still uses occultatio in the sense of "dissimulation", "hiding your thoughts".

To a concealment of light, however, one must put an end because, as the Lord himself sayeth: "No man, when he hath lighted a candle, putteth it in a secret place, neither under a bushel, but on a candlestick, that they which come in may see the light."

Taking it from there, the great Zingarelli dictionary of the Italian language signals the use of occultazione, in the astronomical sense, as being extant since the year 1328. For the English language, the Oxford Dictionary of English Etymology says the word occultation, again in the astronomical sense, to have been used "since the XVIth century", without giving a quotation.

So the hypothesis seems warranted that preacher Albertanus of Brescia laid the groundwork for a new use of an old word; that from there this new use passed into what, later, would become the Italian language (modern Italian is an evolution of the Tuscan dialect; Brescia is in Lombardy, and the dialect of that region has had strong influences in the genesis of modern Italian) and that from the Italian, it found its way into English. It's nothing more than an hypothesis, though supported by written documents.

NB: the quotations given without an online source come from hard-copies in my library.

21
When did the term “Space” first come into use?
6
What was the first animal sent into space?
7
What would a physically correct term be for “artificial gravity by rotation”?
10
What term can we use to describe a planet's or dwarf planet's nearest distance to Earth?
1
Why use the term “gravitational slingshot”?
5
Why do delta-v and delta-v both use the same term?
3
What is the correct term for the exterior of a rocket or space launch system?
6
Is it appropriate to use the term “geology” for Martian studies?
4
When was the first strap-on booster used in spaceflight?
0
What is the distinction between detaching, jettisoning, and dumping?