How can a non-floored habitat be sealed on Mars?

Let's suppose I want to create a pressurized dome structure on the surface of Mars, but I want to avoid the time/effort/expense/engineering of sealing the base. Let's further stipulate that I've got a good subsurface geological survey of the area, and I've confirmed that there are no voids or caves beneath the area.

How do I engineer the seal between the dome and the surface? Does the surface need to extend subsurface? Is surface concrete plus the weight of the dome enough to seal? How do you protect against subsidence around the seal?

In an answer to another question, I suggested that a double or nested dome could be used: 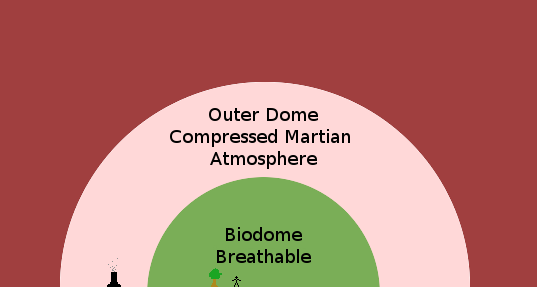 The basic idea is that if the outer dome is a bit leaky it's not a big deal because the leakage can be continually replaced with compressed martian atmosphere using big dumb compressors. Leakage from the inner dome to the outer dome would be relatively slow due to roughly equalized pressure. In this way a measure of leakage can be actively accommodated without putting undue stress on the machines responsible for creating a breathable atmosphere.

A dome with an unsealed floor would want to behave in a manner not unlike a hovercraft, with the air wanting to rush out under the sides and also lift the dome up. So it'd be necessary to both bury the skirt and have some beefy regolith anchors - alternatively the pressure could be contained by burying the dome or making the dome incredibly thick; about 4m of regolith-concrete or 10m of ice for 0.4atm of pressure. Either way, I suspect that using a completely sealed dome and carting the regolith inside would involve much less digging.

Not the answer you're looking for? Browse other questions tagged mars habitat or ask your own question.

14
Could permanent self-sustaining biodomes be built on Mars?

13
What kind of leak rates do modern habitat modules have?
8
Depressurization of a habitat on Mars
8
Might thermal mass, reflective insulation, and limiting light penetration allow heat control on the Moon? (reboot)
6
On building future sustainable Mars habitat
9
Are there any designs for a Mars Habitat made out of stone?
2
What are the challenges in building a supercritical CO2 gas turbine power plant for a Mars habitat of 6 astronauts?
2
Is a glass habitat on Mars viable?
0
How much soil can be supported by an inflatable habitat on Mars?
4
Is it cheaper to build a habitat on the surface of the moon or dig a hole into the moon and build a habitat in there?