Could you use a hypersonic space plane to fly into space?

Is it possible to use a hypersonic jet that goes at extreme speeds in the atmosphere, then once it's at a high altitude it points down to just above the horizon and speeds up. Then it flies by that point that was the horizon which it is now going up because earth is curved and its traveling in a straight line. Would this work to create enough momentum and speed to escape Earth's atmosphere with a single stage vehicle? 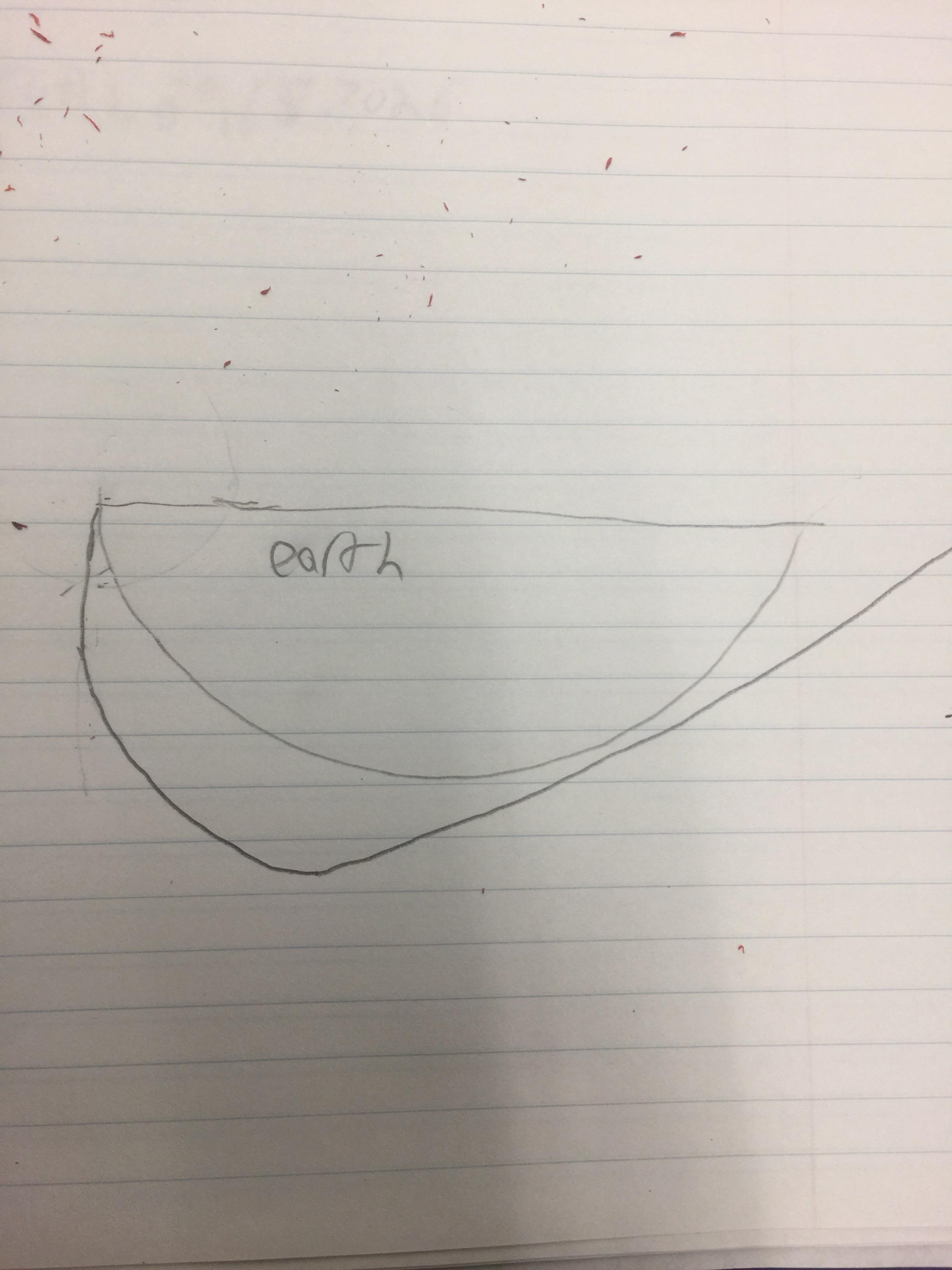 I don't think it's that bad a question that it deserves all the criticism it's gotten.

Basic idea, fly really high and as fast as possible, then point towards the Earth and use Earth's gravity to go even faster and escape the Earth.

Problem #1. Flying really high doesn't look like your diagram. The highest aircraft, if the Earth is the size of a beach-ball, say, 1 meter in diameter, the highest an aircraft could reach would be less than 1/2 inch (1.3 cm) off the beach-ball, so there's not much of an angle available to point downwards. There's also an atmosphere problem. Point downwards too much and the craft runs into wind resistance and slows down.

This diagram gives you an idea of how close objects in Near Earth Orbit are, and the jet you're talking about would be much less high than that.

Problem #2, any velocity added by using the Earth's gravity also brings the jet closer to the Earth so more velocity is needed to escape. You can't use a planet's gravity to escape the planet's gravity unless the object is already in orbit, and that kind of gravity/velocity approach is always zero sum game. You can't add velocity that way unless you're talking relative to a 3rd body, which your example isn't.

Skylon's design is, in fact, for a hypersonic SSTO that is partially air-breathing, much as you describe. It has some important differences, though.

The first of these is that it does not use a dive to speed up. userLTK's answer explains why using gravity acceleration to get fast enough to get to orbit won't work; briefly, orbit is when you already are going fast enough to do precisely this, continuously. Instead, it just runs its engines the whole way, just like a rocket.

The second is that its engines are very carefully designed to work both as rockets (taking oxygen along when the air runs out) and as jet engines of a unique type (ramjets with heavily precooled intakes and a way to self-start at low speeds). Neither one has been done before, as far as I know, and especially the precooling is extremely challenging. But it's essential, as otherwise the heating just from ram-compressing the thin air at high altitudes for the jet mode will leave the air too hot to expand further, which means the jet stops thrusting.

The third is that its wings, while important most of the way up, become vestigial in the upper atmosphere; it simply uses a gravity turn at that point, letting its inertia curve it from a shallow climb closer and closer into an orbit as it reaches orbital altitude and speed.

So your title question can probably be answered in the affirmative: there's a company spending hundreds of millions of pounds on a design that may well be solid enough to do the job, so it's very likely possible in principle. But the specific method isn't quite the way you describe it; it's much more challenging to get to orbit than most people can readily grasp.

At the risk of repeating an existing answer or two...

You can't take advantage of the gravity of the body you want to escape as a means to make that escape. Earth's gravity gives every object within its reach some amount of potential energy due to that object's mass and distance. The further an object, the greater its potential energy. We are all familiar with falling objects accelerating; that is an exchange of potential energy for kinetic energy (downward). Newtonian mechanics includes a law stating that energy must be conserved. So, ignoring air resistance for the moment, the falling object gains exactly as much kinetic energy as it lost potential energy. Now your hypersonic spaceplane, as it dives from high altitude does the same thing, except it is losing energy to atmospheric drag. When it climbs back out, the best it can hope for is to get back to the same energy state it had when it began the dive, except it won't because of drag losses.

Gravitational "slingshots" work because of a nifty bit of physics. Let's say you're on a spaceship cruising along a highly elliptical solar orbit out from Earth kinda in the general direction of Jupiter. Now Jupiter is moving along its orbital path around the Sun, but you are on more of an outward path, and you don't have much velocity in a direction parallel with Jupiter's motion. But, you will make a very close approach to Jupiter, passing on its trailing side. As you approach, your ship is accelerated toward Jupiter by its gravity. As it passes just ahead of you, your trajectory is bent in the direction of Jupiter's motion. You fall into and then climb out of its gravity well. Since you started off outside of its "sphere of gravitational influence", you escape from it. But you have picked up speed with respect to the solar system. You actually robbed Jupiter of a little of its orbital energy around the Sun and took it with you to help escape the solar system. This was used by the Voyager spacecraft, among others, and it only works because the spacecraft were never in orbit around Jupiter to begin with, and chose a path which allowed them to be pulled along the plane of the planetary orbits as a way to pick up speed.

Theoretically, a hypersonic craft could fly all the way from the ground into orbit. There are a number of challenges to doing so. Escape velocity or even a low Earth orbital velocity is very fast - about 17,000 mph or more; travel at such speeds at normal aviation altitudes is essentially impossible because of the drag and heat that would be produced. It's only possible in the thinnest air which is practically space, and even then, there are heat management issues - any vehicle returning from space has to deal with them. Nevertheless, Skylon seems to address all the issues, but it's still facing a steep development path. Even then, if it proves to be technically feasible, there remains the question of whether it will be commercially feasible. Consider Concorde - a marvel of 1960s aerospace engineering. At the time, it was thought to be the future of air travel. It turned out to be too expensive for most travelers, and ultimately went out of service because it couldn't be operated at a profit. The Space Shuttle also was retired because it failed to meet its principal design objective - routine, economic, scheduleable access to space. As a concept, an SSTO spaceplace looks very attractive, but it is yet to be proven if the hoped-for benefits can be realized.

The idea is to continually fly higher and faster minimizing heat loss on the skin of the craft which is wasted energy; while continually utilizing the Earth's atmospheric oxygen for propellant rather than carrying the oxygen or an oxidizer aboard the craft. So who is designing a scram jet to operate from Mach 5 to Mach 35? To get into orbit. Rockets gain orbit in around 30 minutes. In using the atmosphere for propellant and stretching out the time to gain orbit to 1 to 2 hours with scram jets while continually moving upward to avoid aircraft skin heating would negate the need to carry an oxidizer in a tank on a rocket. Why this has not be done yet is the real question. Rockets should be outmoded in 50 years or less once scram jets that operate from Mach 5 to Mach 35 are perfected.

You need to get at least 160 kilometers up to be in orbit.

Considering that the momentum of the fastest planes cannot take them much higher than 35 kilometers, you would need a plane that is 5-10-20 times faster more powerful than a stealth bomber for the same weight. the maths are difficult but it is mathematically possible if new stronger and more energy dense materials were invented.

It would make more sense from an energy point of view to use a cannon built on the slope of mountain or in the sea. Also, you need thrusters to steer that momentum, because a plane cannot steer in low atmospheric pressure, and after 32 kilometers, the oxygen supply is less than one percent of ground density, and at 20 kilometers it's around 5%.

If you can make a plane 20 times faster than a stealth bomber, you should be able to get to at least 50 or 100km altitude, but the time to inflect the airplane upwards would be going at 5 kilometers per second, so you would have about 5 seconds to turn your forwards momentum upwards, you would need big strong flaps and thrusters!!! At that kind of velocity, you could go around the planet in about 2 hours flat.

low earth orbit at 160km takes 88 minutes, so if you can get around the earth in 88 minutes, there's good chances you can get into orbit. That would be 30 times faster than the current fastest runway airplanes.

Not the answer you're looking for? Browse other questions tagged spaceplane supersonic or ask your own question.

39
Has humanity launched a SSTO ... ever?
38
Why aren't all satellite-carrying rockets launched from airplanes?
11
Can you get to orbital speed with an air breathing engine?

6
What use could be getting to space just for a bit?
8
Might either the Buran or the Space Shuttle fly again, or similar spacecraft be built in the future?
12
ISRO's space plane on top of of a rocket - how unstable was it?
9
Could the SpaceShipOne fly again?