How many earth stations had astronauts on-site during John Glenn's orbit in Friendship-7?

The Washington Post just republished it's February 21, 1962 article covering the launch, Earth orbit, and safe re-entry and recovery of (Senator) John H. Glenn, in recognition of his service and recent passing. 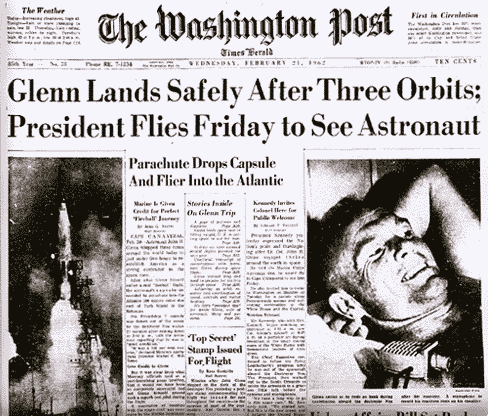 It is worth taking time to read how spaceflight was described a half century ago. I was surprised to read how many Earth stations were involved, and that NASA astronauts were posted at several of them and if I understand correctly were in voice communication with him.

This must have been quite a network. Since things could change rapidly, it was probably a goal to keep in voice communication with the astronaut as continuously as possible. The netowrk itself deserves a separate question. Here I'm wondering:

How many of the Earth stations involved in receiving telemetry from the spacecraft while in orbit had astronauts stationed on site? Was this coincidental or was there intention to have a fellow astronaut 'on the other end of the line'? If intentional, what was the rationale?

According to NASA's mission report on Mercury-Atlas 6, the following ground stations in the Mercury network offered voice communication and spacecraft telemetry (in order of eastward travel):

There are two additional stations with radar tracking capability but not communications.

Most of these stations made contact with Glenn on the first orbit, as you can determine by reading the transcripts.

With fourteen stations there obviously weren't enough astronauts for "CAPCOM is an astronaut" to be a hard rule. In addition, at several of the stations, the initial contact is made by a technician; e.g. the transcript shows call sign "Canton Com Tech" before the call sign "Canton CAPCOM" takes over. In a few cases the surgeon at the site addresses Glenn directly ("Friendship Seven, this is Surgeon Zanzibar") to discuss blood pressure tests and the like. Apart from Cooper I don't think any of the CAPCOMs are addressed by name.

According to The Space Race Encyclopedia, Cooper was at Muchea, Grissom at Bermuda, and Schirra at California. Shepard was CAPCOM at Canaveral according to The Right Stuff and other sources. As Carpenter was Glenn's backup crew, I assume he had to be at Canaveral as well. Slayton's autobiography places him at Canaveral ("sitting next to" Shepard), so I believe the answer is that there were four astronaut CAPCOMs at different sites on this particular flight.

Interestingly, after losing contact with Woomera on the first orbit, Glenn calls "broadcasting in the blind to the Mercury network", and gets replies from Canaveral, Kano, and Zanzibar -- saying they did not read the transmission! I infer from this that another ground station (Woomera or Canton?) did receive, and relayed to the others.

According to Wikipedia, "NASA believes that an astronaut is most able to understand the situation in the spacecraft and pass information in the clearest way."

More than anyone else, the astronauts know each other and the interior of the spacecraft as seen by the pilot; they develop their own jargon. (If you've ever given technical support over the phone, you know how much easier it is to do so when the person you're talking to speaks the same technical jargon dialect that you do.) If communication is fragmented, the astronaut CAPCOM can piece it together. If the astronaut pilot is in the middle of a procedure and says "ah crud it's doing that thing again", the astronaut CAPCOM knows what he means. CAPCOM can then translate for the rest of mission control at leisure, as necessary.

Even for the very first American manned flight, it was considered important for Alan Shepard to be in communication with someone who had undergone the same training (Deke Slayton); for the second flight, Shepard was the natural choice for Grissom's CAPCOM because he was the only one who'd been through a flight.

Trust was also a factor. The Mercury 7 astronauts, while competitive, were a very close-knit group, and knowing that one of their own was in the comm loop reassured them that they had support in case of any disagreement between the crewman and mission control.

I did some statistics with the data from http://mercury6.spacelog.org/original/144/

Due to the low orbit with an inclination of 32.54 and the limited number of ground stations it was not possible to achieve a continous communication. Only during the second orbit all ground stations could communicate. A radio link was established even with Mercury 6 very low above or even below the horizon and a distance of up to 1100 nautical miles.

According to this article, there were 13 capcom stations, of which the most critical 6 had astronauts at them, and the other 7 were manned by "recent college graduates".

Not the answer you're looking for? Browse other questions tagged communication astronauts project-mercury or ask your own question.

17
Were there any CAPCOMs who were not astronauts?
10
Where to look for historical or reconstructed orbit data for early NASA missions - Mercury-Atlas 6 for example
4
Why did Mercury use multiple CAPCOMs while Apollo did not?