Why did the design for Space Shuttle docking change?

While browsing concepts of Space Station Freedom and other '80s NASA concepts (I love concept art), I noticed that there are some interesting differences in how the Shuttle was intended to dock with a station than in real life. The concepts, noticeably 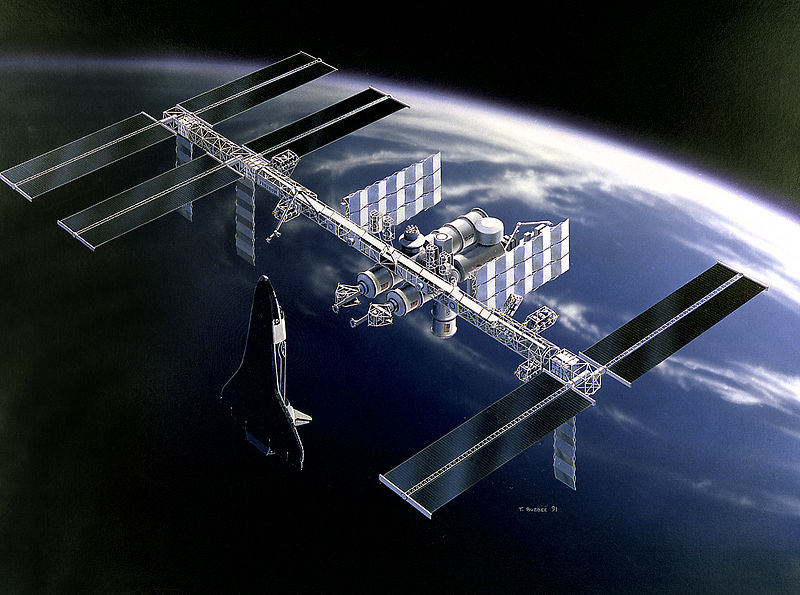 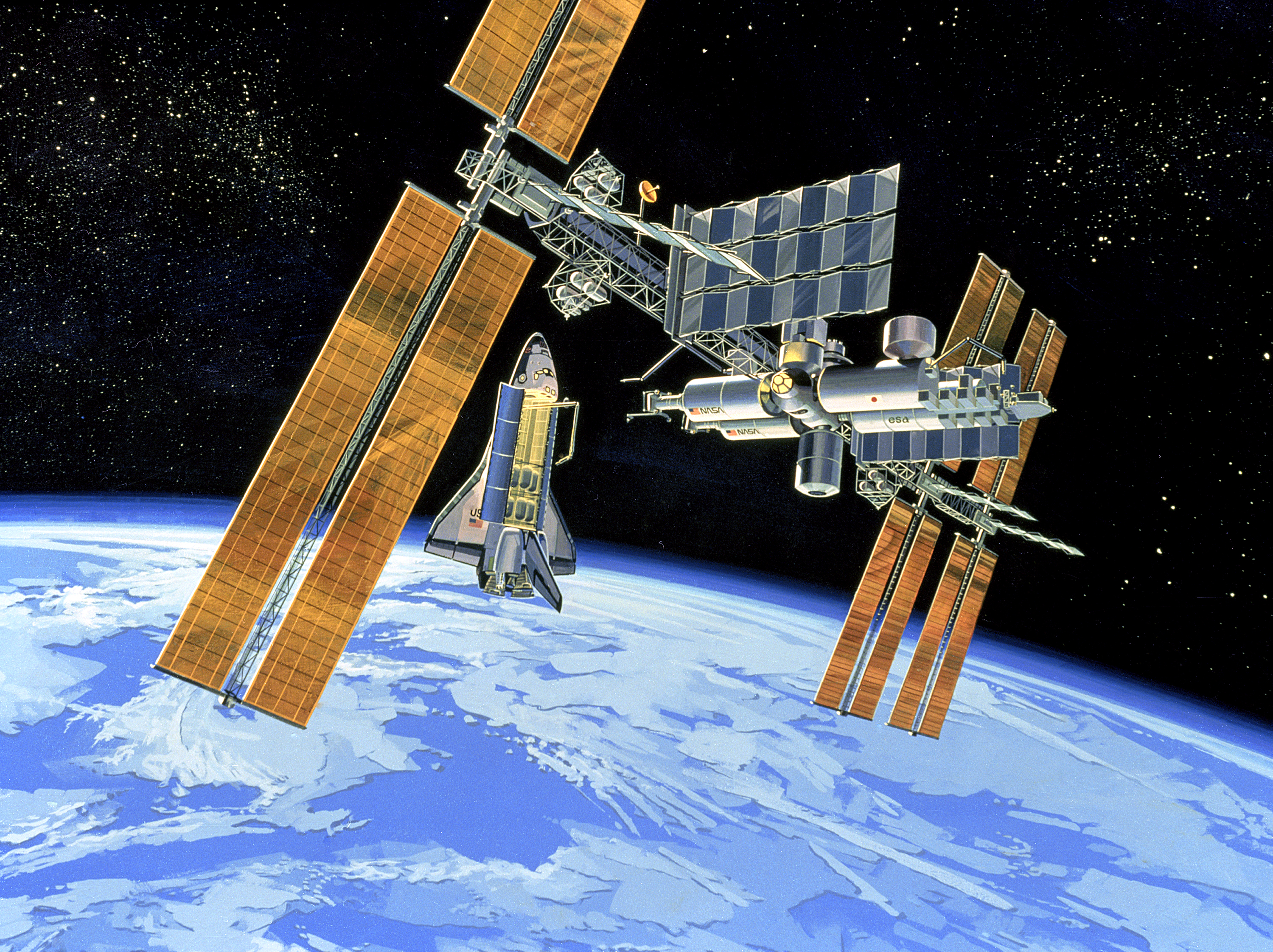 have no real docking port inside the Shuttle. In fact, the docking adapter is on the station instead of inside the shuttle. Why would NASA not choose to go with their conceptual design when building the ISS, and how would it have worked? Surely keeping the adapter on the station would increase payload mass/volume, which is pretty critical when building a station.

This diagram from 1973 (shortly after the contract was awarded to Rockwell) shows that the external docking adapter was already planned. I suspect those concept art photos are playing fast and loose with reality. 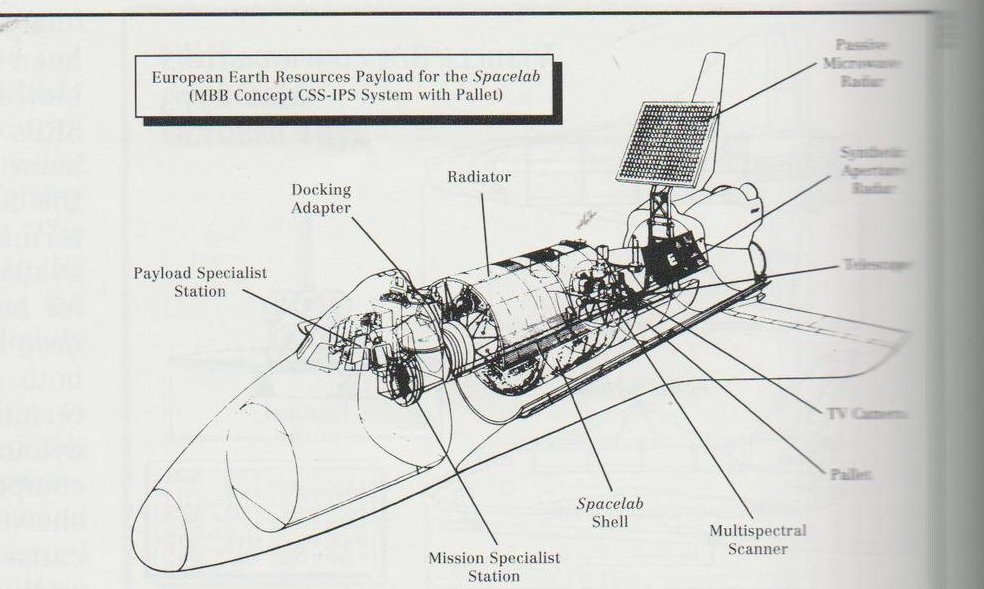 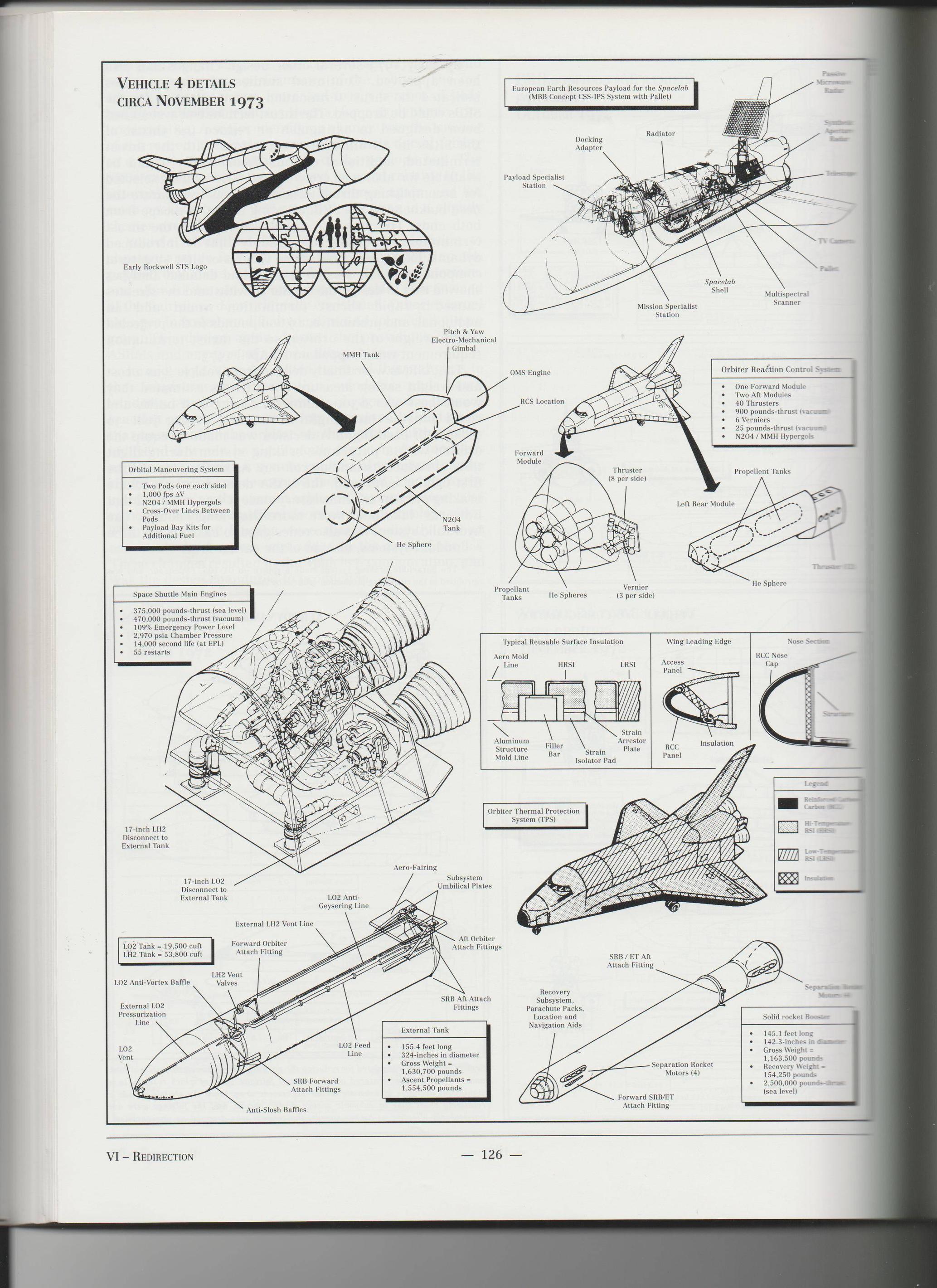 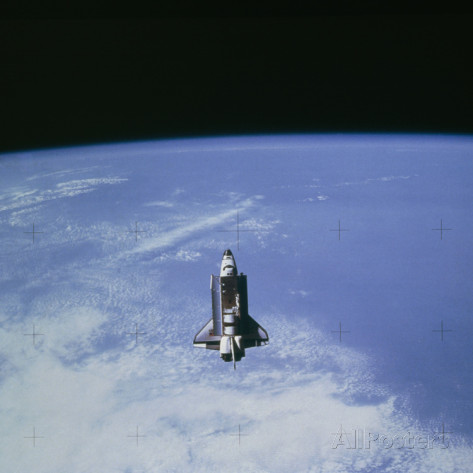 This image is a little small, but you can see that there is no docking port on the spacecraft. The docking adapters were only installed for the first Shuttle-Mir missions, and later found use on the International Space Station.

Ooh, this is old.

I do feel the answers need a little addition though:

Why would NASA not choose to go with their conceptual design when building the ISS,

See below, but TL;DR: Russia coming on board and Mir-Shuttle docking experience killed off the design.

and how would it have worked?

See below. NASA patented a concept of its operation.

The two illustrations depict Space Station Freedom with very real concept docking adapters, designed to dock the Space Shuttle with SSF. This was the official NASA design for around 4 years.

Historically, previously, and all along, the Space Shuttle Orbiter had designs and concepts for docking with space stations. And as seen above in another answer, early on they had a docking module in the front part of the payload bay.

A variation of this had the docking tunnel curving into the as designed airlock in the cabin.

These worked with the assumption that the space station would have and/or a telescopic pressurized docking tunnel (which dated back to the 1960s design work for a space station).

There was also a smart tunnel that was composed of a shortened Spacehab-like compartment on the end of a flexible pressurized tunnel.

But in the late 1980s a design became quite secure: This was based off the already decided unpressurized berthing adapter that was going to be an early building block of the SSF. 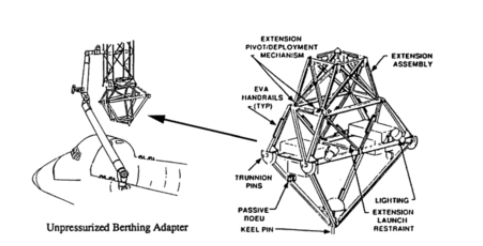 That was a lattice framework that had grapple fixtures for the Orbiter to use its arm to berth itself with the SSF and the lower half had trunnions and keel pins that lined up with the forward section of the Orbiters payload bay.

To make it a pressurized docking adapter, a docking tunnel was added with an airlock/hatch that was placed at the end of it within the trunnion/keel pin framework. The Orbiter cabin airlock hatch would be modified to mate with this hatch.

The other end, affixed to the space station, ended with a cone, that later had it canted to one side, off the central pressurized module axis, accommodating the following system to its side.

That side then featured a retractable vehicle and station coupling system.

This was extended to meet and attach to the corresponding coupler that was attached to the right side of the Orbiter payload bay.

Once attached and any movement having dissipated the extended system retracted bringing the station and the Orbiter together for a hard dock. At this time the docking hatch adapter would have been brought to meet the Orbiter airlock hatch and they would mate, forming a pressurized docking tunnel through to the space station.

This is the reason given for not having the docking system in the payload bay:

Since the mechanism must be sized to allow through passage of personnel and cargo, the associated large diameter and centerline mounting requires considerable support structure and a heavier structure than would normally be desired from a loads and dynamics standpoint. Further, since the combination structure is fixed in the payload bay during the shuttle’s space mission, the net usable payload mass and volume capacity of the orbiter is severely restricted.

The Orbiter based coupling mechanism is actually based on the ASTP/APAS docking ring, only much smaller with 4 petals instead of 3, with linear attenuator actuator devices that attenuate and limit impact loading to an acceptable level or to realign the spacecraft for final docking and tunnel interconnection.

Here you can see the retraction coupling system is extended, ready to receive and couple with the Orbiter.

Note that the right hand docking system is the Primary docking adapter, and the Orbiter would approach tail down.

The left hand docking system is the Backup docking adapter, and the Orbiter would approach tail up, nose down.

NASA patented this docking adapter in 1988 and it became commonly seen after that in much of their literature regarding Space Station Freedom. 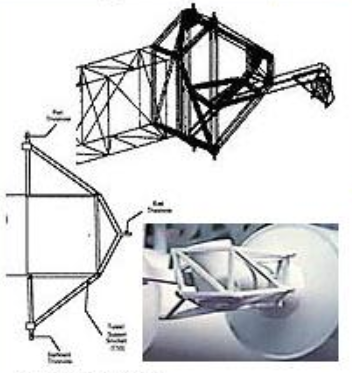 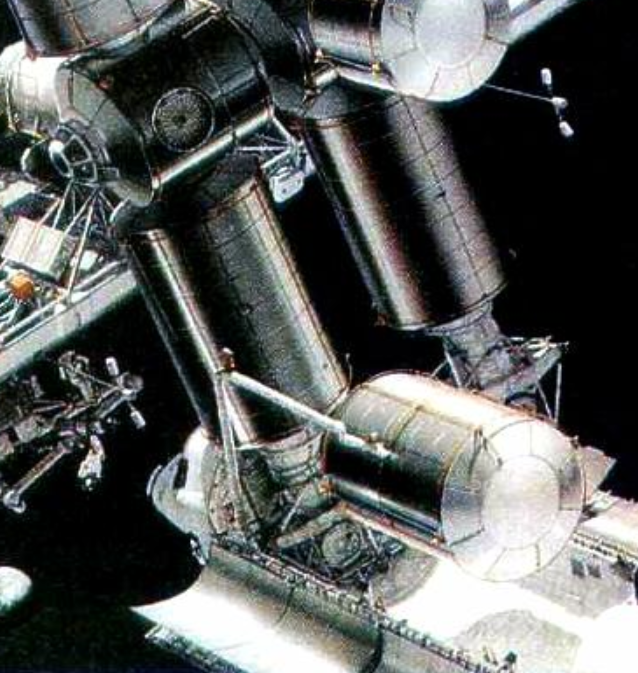 And this became the official docking system between the Orbiter and Space Station Freedom seen in NASA illustrations, generally between 1988 and 1992 when it was suddenly dropped. 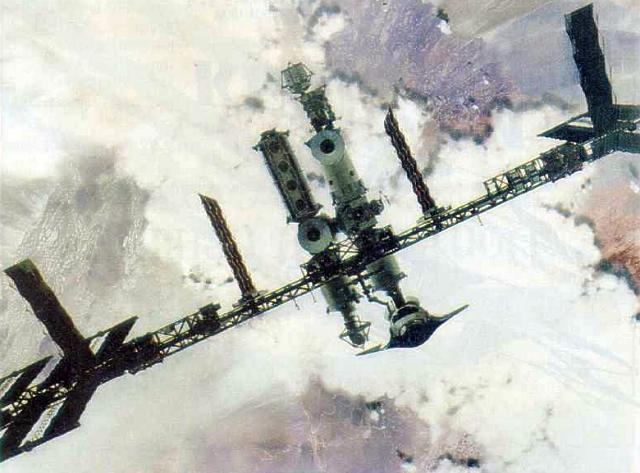 Incidentally, when not docking, berthing could also be used, utilising the Orbiters SSRMS arm to grapple the now named-berthing adapter and bring the Orbiter in to the docking position. 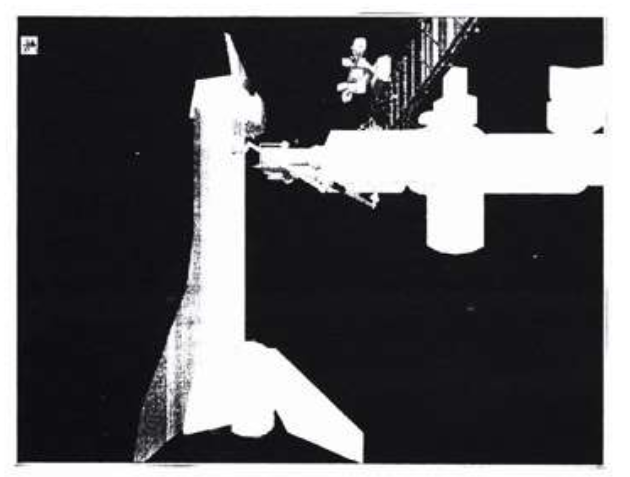 Why was it dropped?

the U.S. chose to buy docking hardware from the Russians. The Russian docking mechanism, the APAS, is a derivative of the Apollo/Soyuz design to which the Russians had evolved by the mid 1980s.

In the late 1980s and early 1990s, NASA had a docking mechanism design, but in the early 1990s, it was decided that NASA and the Russians would cooperate to build the ISS.

To do this, NASA began procuring Russian hardware and abandoned its formal docking mechanism design work.

Basically the success of the Mir-Shuttle mission partnership and the political atmosphere at the time caused this docking mechanism to be dropped. In its place was a much simpler system, based on APAS-89 and the experience on using it to dock Orbiter with Mir.

When the berthing/docking adapter was dropped, the PMA appeared in subsequent artwork and design studies: 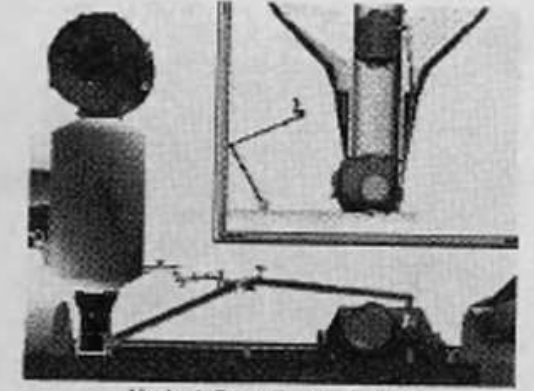 32
Will the ISS need more docking ports?
9
Why were the docking ports removed from Zvezda? (Service Module)
10
On Mir, Zarya, or Zvezda, do docking ports consume space inside the module?
9
How much crew time is required for visiting craft, at the ISS?
10
If NASA's plan is to launch 4 astronauts to the ISS on CCtCAP vehicles, why design for 7?
12
What will be NASA Policy on backup ISS docking/berthing ports, once commercial crew is up and running?
45
Why did the Space Shuttle fly upside-down normally
19
Why was Space Shuttle Atlantis selected for Mir docking so frequently?
4
Is the ISS going to yaw and assume the XPOP attitude for Nauka docking?