What are quaternions and how are they used to represent spacecraft dynamics?

The title says it all. Quaternions are widely used to represent the orientation of a spacecraft. Why is that, and how do quaternions compare to other alternatives?

What are quaternions and how are they used in spacecraft dynamics?

With this assumption, describing translation is easy, at least compared to rotation. An object's center of mass has a position in some frame of reference (preferably inertial) that changes over time. Gravitation, drag, and other interactions such as firing the translational thrusters change this value as a function of time. Simulate these interactions and you have a three degree of freedom (3DOF) simulation.

What makes 3DOF modeling so easy is that it is a commutative space. Walk north ten meters and then east five meters and you'll arrive at a certain spot. Alternatively, walking east five meters and the north ten meters will bring you to that same spot. Translation in Euclidean space commutes. Rotation in three dimensional space is not commutative. Pick up a book and rotate it about an axis parallel to the book's spine and then rotate the book about an axis perpendicular to the book's face. Do these actions differently (first rotate about an axis perpendicular to the book's face and then about it's spine) and you'll get a different end result.

As rotations in three-dimensional space do not commute, whatever they are, they are not vectors. Commutativity is an essential quality of being a vector. Since rotations aren't vectors, how to represent them? It turns out that there are a many different ways to represent rotations in three dimensional space. Euler was one of the first to investigate this issue, realizing a number of key concepts. One is that a rigid body rotating in three dimensional space can always be described as instantaneously rotating about a single axis. This concept is unique to 3D space, and is also key as to why quaternions (unit quaternions) are useful for describing rotations. I'll address this a bit later.

He also realized that the orientation of a planet, or of a rigid body in general, can be described in terms of three rotations. Euler used a sequence of three rotations: A rotation about the Z axis, then another about the once-rotated X axis, and then yet another about the twice-rotated Z axis. There's nothing special about this canonical Z-X'-Z'' sequence. All that is needed is that the first and third rotations be about the same body-fixed axis and that the middle element be about a body-fixed axis orthogonal to the other axis. A related sequence is to use three orthogonal body-fixed axes. This choice results in (for example) a roll-pitch-yaw sequence. There are six classical Euler sequences (e.g., Z-X'-Z''), plus six Tait-Bryan sequences (e.g., roll-pitch-yaw). Yet another variation on this theme is to rotate about a fixed set of axes. This leads to the extrinsic Euler sequences. All together, there are 24 different things that can be called Euler rotation sequences.

Another way to represent rotations is via a proper orthogonal matrix. An orthogonal matrix is an NxN matrix in which each row (or each column) is a unit vector and is orthogonal to all of the other rows (or columns). This representation is generic; it applies to any N-dimensional cartesian space. The 3x3 representation is of special interest because we live in a 3D universe. A key problem with an NxN matrix used to represent orientation is that rotations in N dimensional space have $(N^2-N)/2$ degrees of freedom while the matrix has $N^2$ elements. Over half of the elements of the matrix are redundant. (This problem of redundancy also applies to quaternions. Rotations in 3D space have three degrees of freedom. Quaternions have four elements.)

Yet another way to represent orientation / rotation in 3D space is via Euler's single axis theorem. No matter how weirdly a rigid body is oriented, there always exists an axis combined with a rotation by some angle about that axis that can be used to represent the orientation of the body in question with respect to some given frame of reference. This axis/angle representation is very close to a quaternionic representation. Given an unit vector $\hat u$ and an angle $\theta$, the quaternion whose scalar part is $\cos(\theta/2)$ and whose vector part is either $\hat u \sin(\theta/2)$ or $-\hat u \sin(\theta/2)$ captures all of the information needed to represent the orientation, completely avoiding the singularity issues associated with Euler sequences, and almost avoiding the over-specification issue associated with matrices.

The above begs the question. I wrote about quaternions before discussing what quaternions are. William Rowan Hamilton struggled to find an extension of the complex numbers, where $i=\sqrt{-1}$. He finally had an insight while taking a walk with his wife and invented the quaternions. To ensure he wouldn't forget this incredible insight, he carved some graffiti on a bridge: 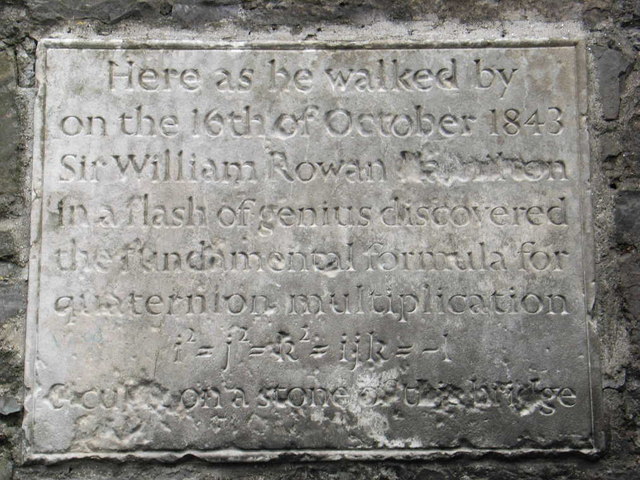 This seemingly simple graffiti is incredibly complex (pun intended). Complex numbers have two elements, one real and one imaginary part. Negative one has two square roots in the complex numbers. Quaternions have four elements, one real part and three imaginary parts. Negative one has an uncountably many square roots in the quaternions.

There is a natural progression from the quaternions, discovered post-Hamilton. The octonions have eight elements, one of which is real part and the other seven are (somehow) imaginary. The sedenions have sixteen elements, one of which is real and the other fifteen are imaginary, and so on, with powers of two. The problem is that each step up the ladder drops a key mathematical concept. Quaternions don't commute (multiplicatively), octonions don't even associate. Sedenions and higher are generally rather worthless.

Quaternions have two key binary operators, addition and multiplication, plus additive and multiplicative identity elements, additive inverses, and except for zero, multiplicative inverses. Addition works analogously to addition of a pair of four dimensional Cartesian vectors. Multiplication is where quaternions get tricky. From Hamilton's graffiti, one can deduce (for example) that $ij=k$ but that $ji=-k$. Quaternion multiplication is noncommutative. If one views quaternions as comprising a real scalar part and a vectorial imaginary part, the product of two quaternions $(a+\vec b)(c+\vec d)$ is ($ac-\vec b \cdot \vec d) + (a\vec d + c\vec b + \vec b \times \vec d)$.

How are quaternions used to represent rotations in 3D space?

This is the key question. The answer is that there is a very simple relation between the single axis representation of a rotation and a unit quaternion. The scalar part (aka real part) of this quaternion is $\cos(\theta/2)$, where $\theta$ is the single axis rotation angle, and the imaginary part is either $\hat u \sin(\theta/2)$ or $-\hat u \sin(\theta/2)$, where $\hat u$ is the unit vector along the axis of rotation. Whether one uses a plus or minus sign is completely arbitrary. This of course results in a number of arguments over "the right way to do it." There is no right way. Both approaches are equally valid.

What are some of the gotchas?

While quaternions aren't evil as are Euler angles, there are issues associated with their use.

The first issues mean that when working with someone else (e.g., a joint integrated simulation), one had better get the nomenclature the two teams straightened out. The odds are strong that the two groups will not be using the same representations, and the odds are also strong that neither team will change their internal scheme. Fortunately, the conversion from one to another is easily handled. There will be lots of finger-pointing it's not handled.

How to numerically integrate unit quaternions?

There are a number of reasons one may need to integrate a unit quaternion over time. A non-zero angular velocity changes a spacecraft's orientation. I use left transformation unit quaternions in my work. The time derivative of such a quaternion is $\dot q_{I\to B} = -\frac 1 2 \omega \, q_{I\to B}$ where $q_{I\to B}$ is the inertial to spacecraft body left transformation quaternion and $\omega$ is the spacecraft's angular velocity expressed in the body frame coordinates. Numerical integration inevitably involves steps along the lines of $x(t+\Delta t) = x(t) + \dot x(t)\Delta t$.

Not the answer you're looking for? Browse other questions tagged spacecraft attitude quaternion or ask your own question.

14
How to best think of the State Transition Matrix, and how to use it to find periodic Halo orbits?
8
In "spacecraft talk" is nadir just a fancy word for "down"?
5
How does gravity change beyond L2?
5
What does "Q frame" means in terms of satellite coordinates?
5
Why would someone use Modified Rodrigues Parameters over Quaternions for spacecraft attitude estimation? And vice versa?
1
Are bicomplex numbers including tessarines ever used in spaceflight (as an alternative to quaternions)?
2
How would you convert keplerian orbital elments into cartesain vectors with quaternions?

19
Do any spacecraft use GNSS for attitude determination?
0
What are "Tundra missiles" and why are they so hard to detect?
22
Why did Apollo spacecraft use both AC and DC equipment? Still used in present and future designs?
5
What attitude have past and modern manned spacecraft maintain(ed) relative to Earth?
7
Which Voyager spacecraft "mutinied", and what really happened?
5
Can a spacecraft use an accelerometer to determine its orientation?
3
Should coordinate transformations from J2000 to ITRF93 in quaternions be cyclic?
1
Are bicomplex numbers including tessarines ever used in spaceflight (as an alternative to quaternions)?