Why do the Russians use these fence-like interstage fairings?

When we look at various Russian rockets we often see a metal structure looking like a kind of garden fence separating some stages. To my knowledge, only the R7 family (Vostok, Voshkod, Soyuz) and N1 are (were) using it, but nobody else.

All other rockets I know of use a solid fairing to separate stages. So why did the Russian engineers chose (and kept) this solution but nobody else? Apart from being very light-weight, are there any other advantages to these "fences"?

Here are some images to show what I'm talking about: 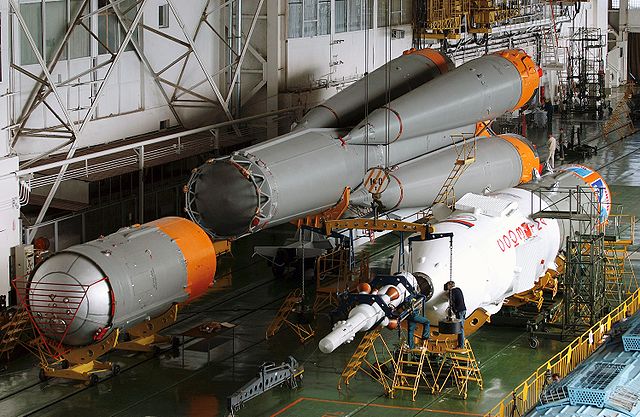 It's all to do with ullage in the fuel tanks. Newton's laws of motion mean that when a rocket is no longer firing and no force is being applied, the rocket receives no acceleration. It continues at its same velocity (if we assume a perfect model). The fuel in the tanks goes into free-fall, just as the astronauts do when they reach orbit. You've seen those soft toys going floating around the cabin when the Soyuz engines cut off.

The fuel also acts a bit like a passenger in a car when you brake hard. Instead of being pushed back in their seats when accelerating, they fly the other way, towards the windscreen. That's why we use seatbelts. The same for the fuel in those huge tanks. It goes whoosh; right to the other end of the tank, the farthest distance from the rocket motor. The problem is, you want it at the rocket motor end. If the fuel is not at the "bottom" of the tank the pumps spin on empty, and can burn out with nothing to suck on.

There are two solutions to this problem. Some craft have ullage motors which are little engines, sometimes just thruster jets or a release of compressed gas. You can see them in many videos of other craft that do not have this mesh. (Not to be confused with the pump exhaust nozzle, but that is another matter entirely!) It often looks like a small exhaust pipe near the engine. They can sometimes just be a small solid fuel engine, much like a firecracker. Their only function is to move (slosh) the fuel down to the pumps. The pumps start, and then the engine fires. Whoosh; rocket starts. Now all this fuel sloshing about can cause stability problems for the craft, so they design the tank with special anti-slosh baffles.

Here we can see those various features in the Saturn V second stage: 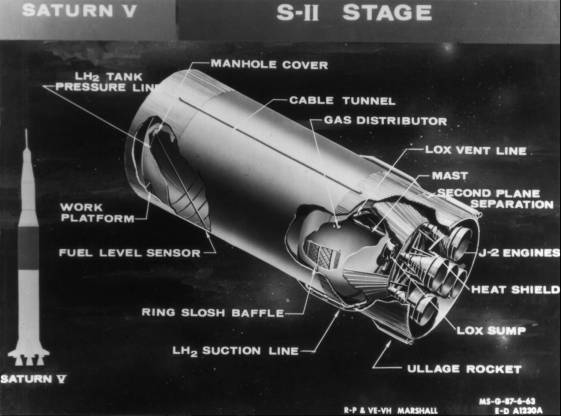 If you want to avoid the extra complexity, controls, fuel, mechanisms and just plain mass and money in your rocket, you can do it the Russian way. Just turn on the next stage while the previous one is still applying force. No need for ullage equipment. However, you have to make somewhere for all that hot exhaust gas (and its force) to go. The easiest way is to make a slight gap between the stages so you then get less of a baba-boom. It also has the nice advantage of pushing the completed stage away from the craft and back towards the planet, which is usually what you want. It might make the rocket taller, but it keeps the mass and complexity down, which is usually what you want.

Not the answer you're looking for? Browse other questions tagged rockets design soyuz-launcher stage-separation n-1 or ask your own question.

10
Why did Amazonas5 2nd stage ignite before 1st stage separation?
30
Why weren't Saturn V and the Soviet N-1 Moon rockets made larger in order to simplify Lunar missions?
23
Why does the Soyuz Rocket system fire the third stage while stage two is still attached?
9
Why do Soviet and Soviet-derived rockets hot-stage instead of using ullage motors?
3
Disadvantage of interstage trusses on Soyuz launch vehicle?

9
Why do the Russians call the Soyuz launcher the same name as the Soyuz capsule?
23
Why does the Soyuz Rocket system fire the third stage while stage two is still attached?
7
Why Use Helium?
14
What are these tiny triangular fins on the Soyuz launcher?
6
Did the N-1 have future plans, like the Apollo Applications Program?
6
Did the Saturn V interstage ring burn up in the atmosphere?
26
Why aren't payloads their own fairings?
4
Vented interstage for the final stage of Saturn V
9
Why are stages not connected by the engine nozzle? Why are interstages used?
2
Why not use alternative/low-pressure atmospheres in fairings during launch?