How does the gravity of a massive non-spherical object act on things around it?

Firstly, not sure if this question ought to be in the physics SE site. Please let me know if it should.

Secondly, I don't know a whole lot about physics (I'm just inquisitive). So please try to keep answers simple (or at least dummed down to laymans terms).

My question is, for a non-spherical object (lets say a cube for now) of a size and mass like that of Earth, how would objects act in it's gravity?

Aspects of this question lead to the following questions

Yes, a cubic celestial would most certainly have anomalous gravity depending on your position relative to its sides. Gravity anomalies are however a perfectly normal thing in space travel, and I'm not aware of any celestials (including the Earth) that would have a seamless gravitational field throughout its surface. Reasons for this could vary, but in simplest terms possible, we could say that:

Any of these properties of a celestial will affect the surface gravity to vary depending on your position relative to its surface. For example, our moon - Luna - was mapped for gravitational fields over its surface to high detail by the GRAIL (Gravity Recovery and Interior Laboratory) probe, and this is an example of the resulting map: 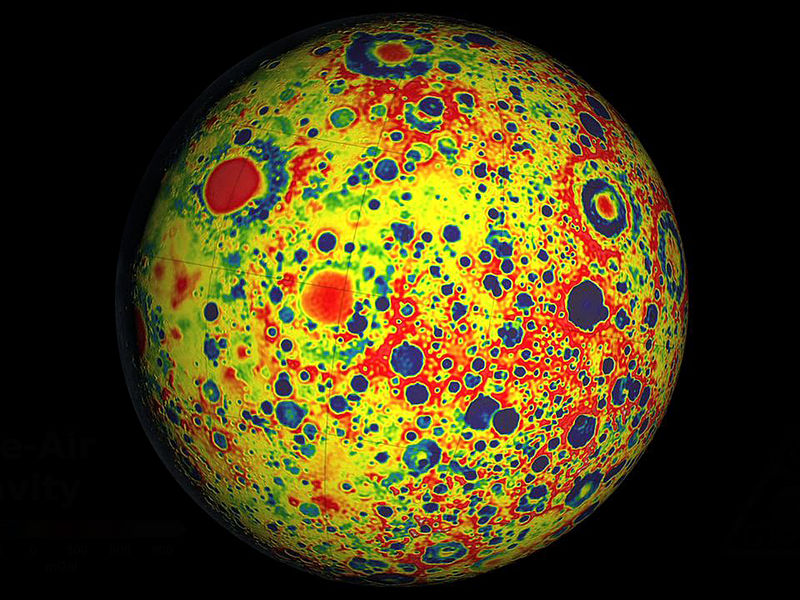 Gravity map of the Moon as mapped by the NASA's Discovery Program GRAIL probe (Source: Wikipedia)

So we have established, that a non-varying gravity over the surface of celestial objects is a normal thing. Great. What we now have to do is convince you that when we say x orbits y what we actually mean is that x and y orbit each other, albeit it might appear to a casual observer that since gravitational pull of one object is much larger than that of the other, one is dominant, and the other submissive in their role in this cosmic dance. To somewhat show what I mean, here are 3 models of two celestial object orbiting one another:

Both these explanations, hopefully demonstrated well enough for the purpose, will serve us later when we describe an orbit of the cube shaped celestial. We'll assume these three conditions are true, to simplify things a bit:

This simplification is important, because we don't want the cube's own mass to flatten its gravity along its surface closer to what it would be, if it was a perfect sphere, and we intentionally exaggerate the effects of its shape for the sake of this demonstration. The cube's gravitational pull would of course still point to a single cube's center of mass, like so: 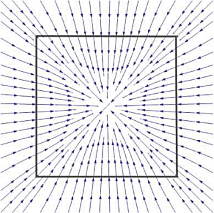 Gravity ﬁeld through a cube sliced in half through the faces.

We can observe the slight distortion of the ﬁeld lines between the edges and the center of each face, and this is exactly what we want. If we compared the gravitational potential along the equator of the cube to the one of a perfect sphere of the same volume, we would get: 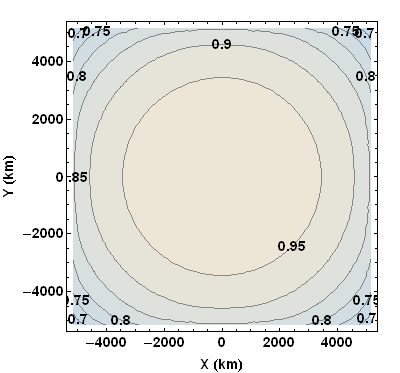 The force of gravity on the cube surface, in Earth g's. (Source: If the Earth Were a Cube)

OK, I'm probably already losing your patience, but I believe we've established our parameters well enough and somewhat described why they might not equally apply in all cases, so let's press on with answering your questions more directly:

So this is about it. Hopefully not too difficult to imagine and easy enough to understand, as per your request to keep the answers simple. If you're interested in reading slightly heavier to read sources on this same presented situation of a cubic celestial in orbit of another celestial (or vice versa), here are some external resources:

12
What is the first non-solar-system object Voyager 1 will run into?
8
How spherical is the Hill Sphere?
3
How does the gravity of Earth change as you climb a space elevator?
2
Restricted Three body problem need to create an orbit around the two massive bodies
2
Ceres gravity from spherical harmonics from Dawn, how to get the coefficients, definitions and potential?
7
How can I verify my reconstructed gravity field of Ceres from spherical harmonics?
3
What is the largest delta-v ever produced in space from mechanically stored energy?
3
Bucket loop between Earth and Moon?
5
How does gravity change beyond L2?