The cool GIF on the NASA JPL Cassini resources page All Orbits (2004-2017): The Ball of Yarn is quite beautiful to look at, but it also hints at some beautiful engineering and orbital mechanics as well. Take a moment to look at the real thing there.

According to the page Saturn tour dates 2016, in the next few days Cassini will execute "short burn number 468" after it starts "rev 254" of its orbit around Saturn.

In my recent question Is Cassini's 183rd burn - or the associated orbital mechanics - some kind of record? I've noted that a popular news article states:

Cassini’s first graze of the F ring is scheduled to occur on December 4th. During that pass, Cassini will also briefly ignite its main engine to help fine-tune its orbit. It will be the 183rd time the spacecraft turns on its engine, as well as its last time, if all goes according to plan.

I'm wondering how to reconcile the "short burn" count > 460 with the number of times the engine has been turned on < 190.

Question: Is there a place where all of Cassini's propulsive maneuvers post-insertion (big and small, or at least big) are tabulated? Perhaps as a list of time and delta-v?

I looked at the orbital elements available in JPL Horizons and I can clearly see when many (most?) of the major changes in orbit happen, but just looking for changes here, or in changes in velocity that can't be explained by Saturn's gravity is a sketchy way to do this considering the complexity of this mission. Also, that would not distinguish propulsive maneuvers from gravitational deflections by Cassini's many close flyby's of Saturn's many satellites.

above: Teaser GIF to get you to enjoy the real thing here (since even the low-res version is larger than the stackexchange imgur's limit of 2 MB oops! MiB) 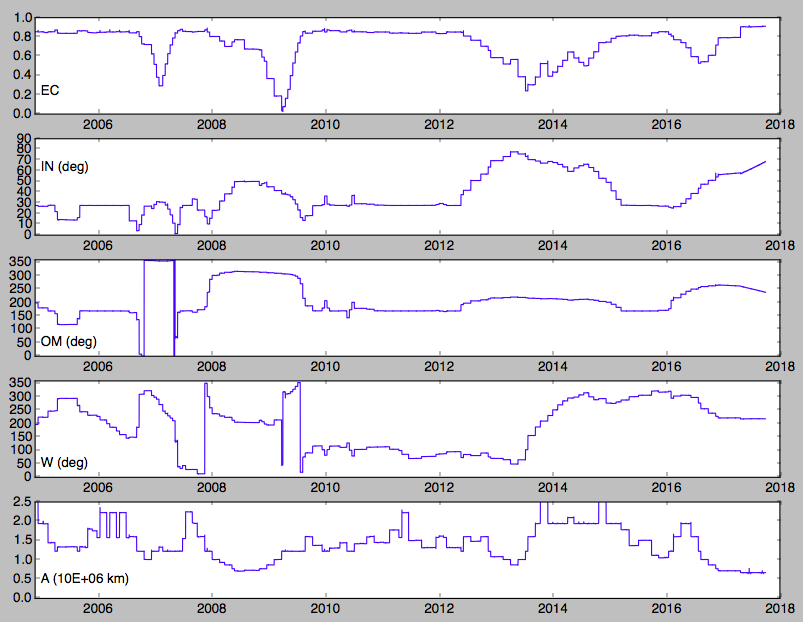 I can't unravel the ball of yarn for you, but maneuvers less than about 1 m/s were done with the ACS thrusters, not one of the main engines. While the main engine is more efficient, it is not accurate enough for very small burns.

You might be able to extract information about Cassini's maneuvers from its Event Kernel (EK) files, publicly available as part of the Planetary Data System distributions.

Not the answer you're looking for? Browse other questions tagged orbital-maneuver cassini jpl-horizons or ask your own question.

8
Is Cassini running out of fuel?
14
Flying fuel tanks! Which deep-space spacecraft had the largest fuel mass fraction?
4
Kepler has 16 GB of memory. Is this DRAM?
5
What spacecraft has had the greatest total propulsive delta-v?
3
Are Jool's moons' orbits stable?
4
Flyby puzzler; starting from Earth, how many times can you use Jupiter flybys in one century?
4
Get dates when a satellite has performed maneuver from historical TLE data (python)?
3
Calculating spacecraft thrust manoeuvres with JPL data
5
Is Cassini's 183rd burn; some kind of engine record?
4
How does not orbiting Europa maximize Clippers coverage of Europa for a given radiation dose?
See more linked questions

13
What are the "crossing beams of light" in the Cassini images taken during Enceladus plume flyby?
3
Save energy in plane changing orbital maneuver
0
Does Cassini have one or two identical main engines - if two, how does that work?
0
Cassini's main engines' burns "can be blow-down or pressurized (with Helium)" - why?
5
Is Cassini's 183rd burn; some kind of engine record?
9
What force is bringing Cassini down into Saturn's atmosphere in another 145 days; drag, or...?
4
Compatibility of osculating elements and cartesian vectors given by JPL Horizons?
6
What is the nature of a "flux tube" between Saturn and Enceladus, and what does "L‐shell=4" mean?
3
Generating JPL HORIZONS parameters for use with JPL HORIZONS itself