Is it possible to see animals from space?

It is technically possible to see big animals, but we are still far from being able to identify them without context information. For commercial satellites, the highest spatial resolution is 31 cm at nadir view (worldview-3), but only in the panchromatic band. For colors, the resolution is still very good (1m24) but only large animals are visible. Only animals with a high contrast are therefore visible (easier to see a horse than a lion) BUT you can also use their shadows for a better detection (helps to identify a giraffe).

One very useful feature to detect animals is the use of thermal infrared. However, this is currently not possible with commercial satellites due to the coarser spatial resolution in this wavelength.

To conclude, even if there are some studies in open savanna or arctic areas where spatial remote sensing is applied to animal counting, it is still very difficult to differentiate the species and even counting is sometimes difficult (like you must look at the spots that moved, but you cannot tell that any spot is an animal). However, given the trends in spatial resolution of commercial satellites (which is no more legally limited to 50cm), one can expect 10-25 cm in a near future, which would look like the cows below (from an aerial photo at 25 cm in true colors, satellites are not (yet) at this resolution. And of course, I am only mentioning commercial satellites for the currently available resolution). 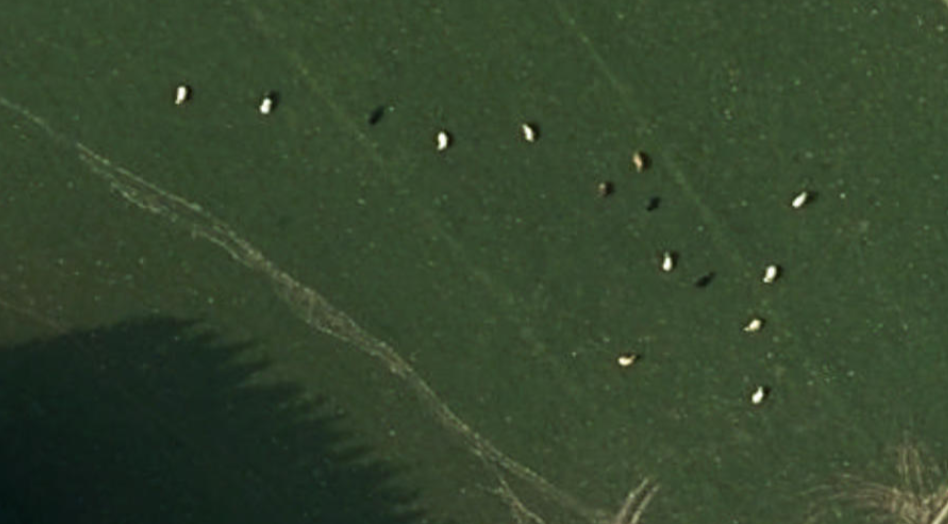 Yes, but it requires exceptional resolution. The GeoEye-1 satellite has 0.41 m resolution, and it has been used to count animals. Here you can see a picture it took of wildebeests: 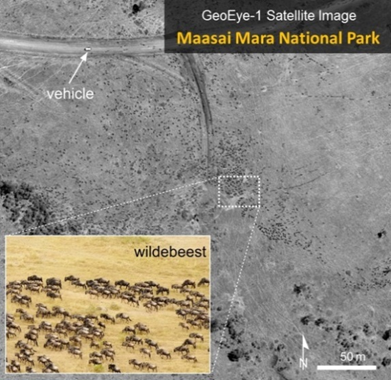 The black and white image is the satellite image (though GeoEye-1 can do color imagery as well in 1.65 m resolution). The tiny dots peppered across the park are wildebeests.

The 4-may-2017 BBC News item Albatrosses counted from space describes an effort to automate the analysis of WorldView-3 (Wikipedia and EOPortal) photos in order to count nesting Albatrosses. It is also described in this week's BBC Podcast of Science in Action (available for the next 29 days).

This is the first case of a bird species being counted individually from space.

All six species of Great Albatross are endangered, these are the largest birds capable of sustained flight. 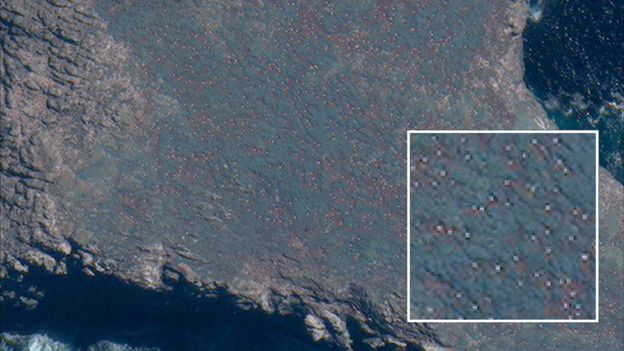 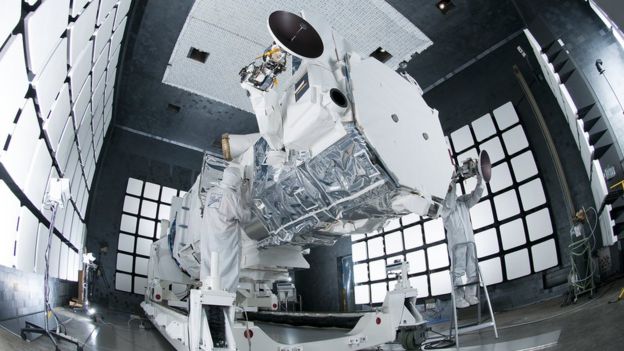 The project is described in the most recent issue of IBIS:

The study was based on WorldView-3 VHR satellite images, with the visible bands (2/3/5) pan-sharpened to provide a 31-cm resolution colour image using the Gram Schmidt algorithm in ENVI image processing software.

Of the seven visible light channels, 2, 3, and 5 appear to refer to Blue, Green and Red. 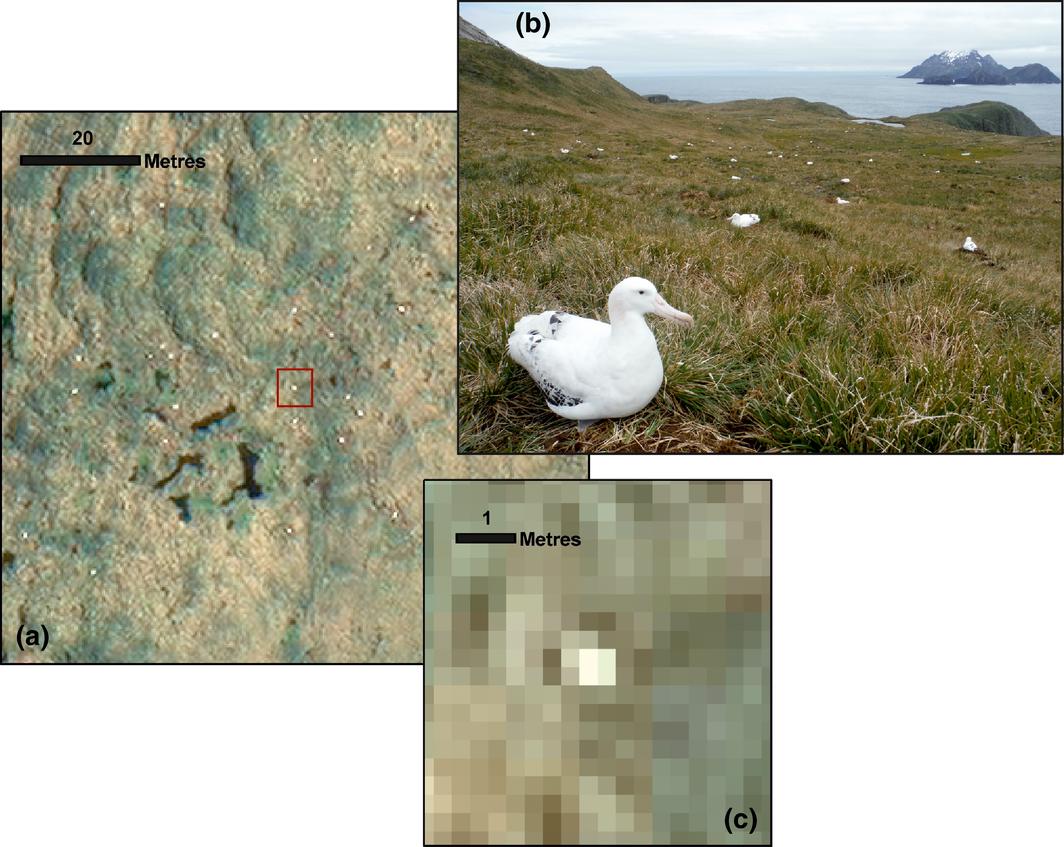 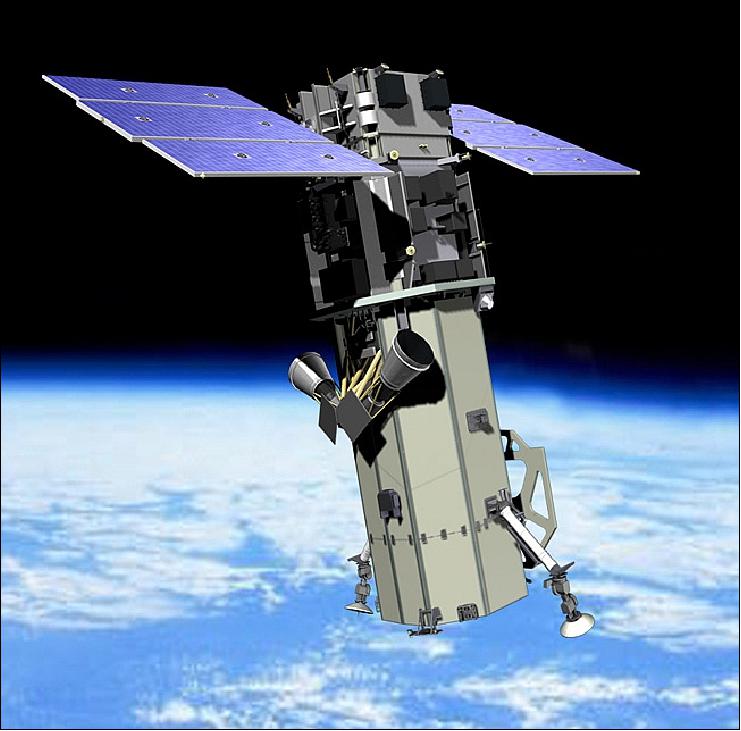 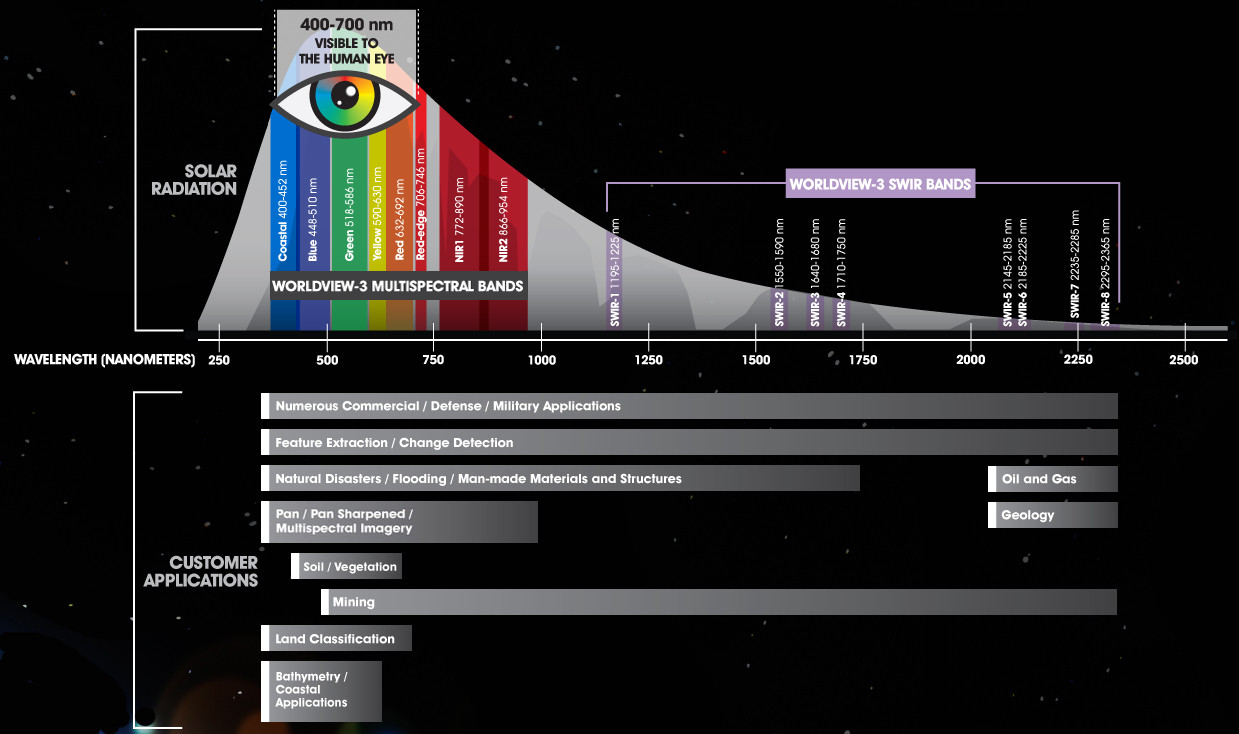 Whales seen from space, and not by the USS Enterprise.

The researchers, from the British Antarctic Survey (BAS), have been using the highest resolution satellite pictures available.

Even when taken from 620km up, this imagery is sharp enough to capture the distinctive shapes of different species.

The team will soon conduct an audit of fin whales in the Mediterranean.

The first-of-its-kind assessment will be partly automated by employing a computer program to search through the satellite data.

[...] This new approach from BAS has drawn on imagery from the WorldView-3 spacecraft operated by the American company DigitalGloble.

WorldView-3 is able to discern things at the Earth's surface as small as 31cm across. Only restricted military systems see finer detail.

"Satellites have improved so much with their spatial resolution," explained Hannah Cubaynes, who is affiliated to both Cambridge University and BAS.

"For the first time we've been able to see features that are truly distinctive of whales, such as their flippers and flukes."

[...] Spacecraft will gather huge image swaths when they pass over the ocean. With the exceptional resolution now available, counting individual whales becomes practical. In a 31cm-resolution image, for instance, a grey whale's fluke will take up 10 pixels.

[...] Ms Cubaynes and colleagues have published their research in the journal Marine Mammal Science. 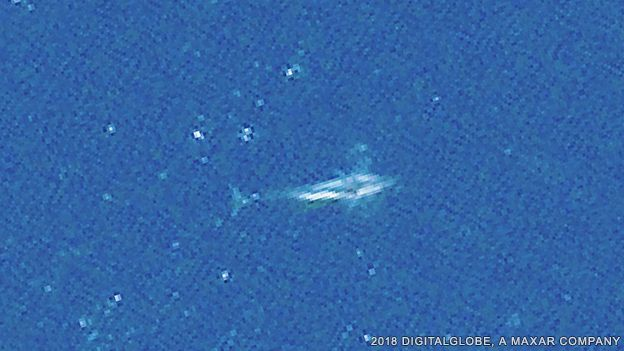 above: "At a resolution of 31cm, species identification becomes much easier" Source 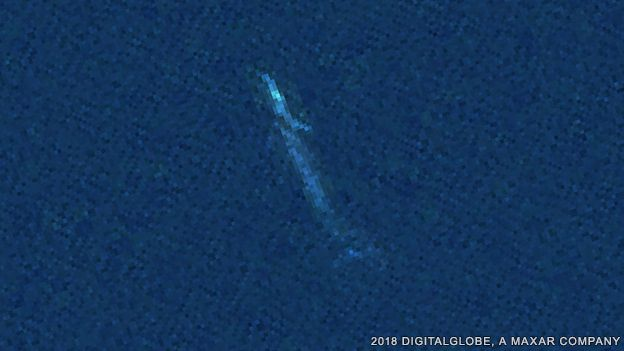 above: "Fin whale: Colour contrast helps with their identification" Source 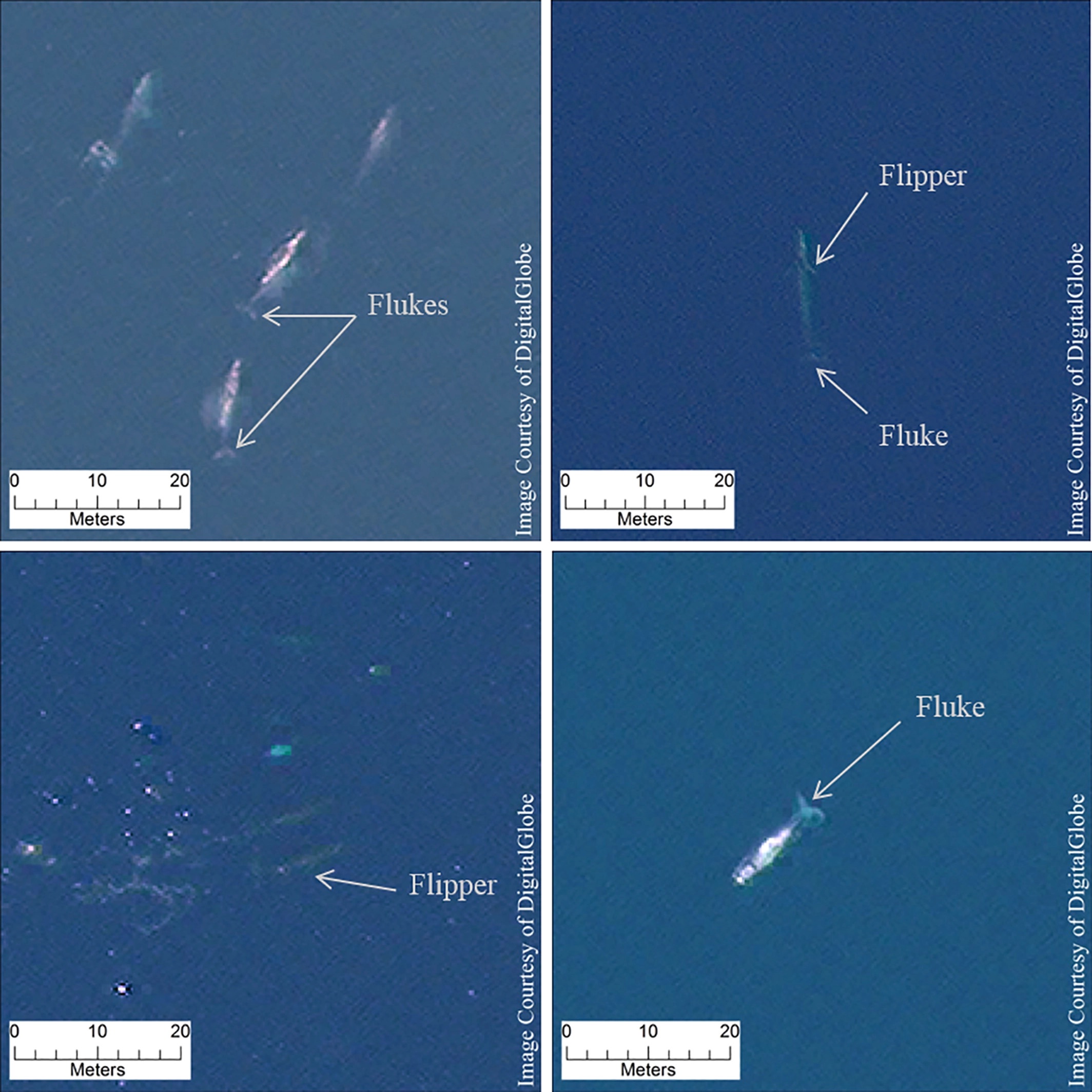 Although I am not sure yet, (and so have asked this question) I think that the image below is that of some cows saying "Hi!" taken by a 4-inch telescope in a 3U cubesat, or Dove. 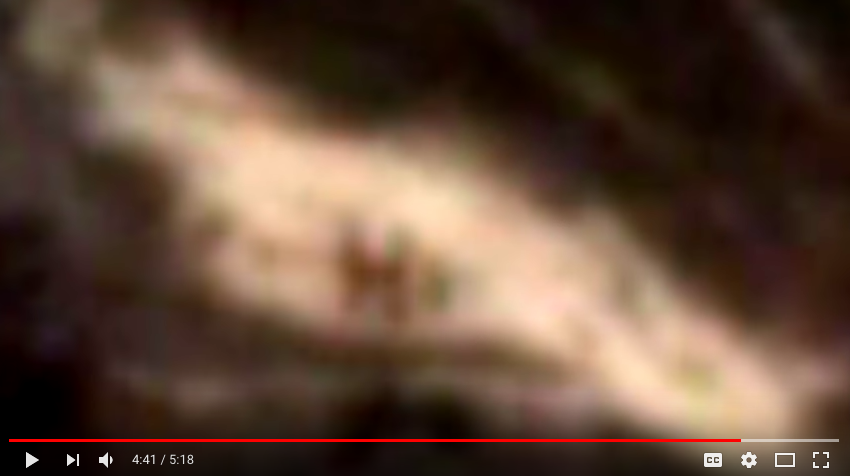 The BBC News article Satellites to monitor whale strandings from space describes the use of the WordView-2 satellite to image mass standings of whales, and references the recent Open Access (non-paywalled) paper in PLOS ONE Using remote sensing to detect whale strandings in remote areas: The case of sei whales mass mortality in Chilean Patagonia which describes in detail the automated image processing techniques for identification of stranded whales potentially sooner than they could be identified and surveyed by aircraft. 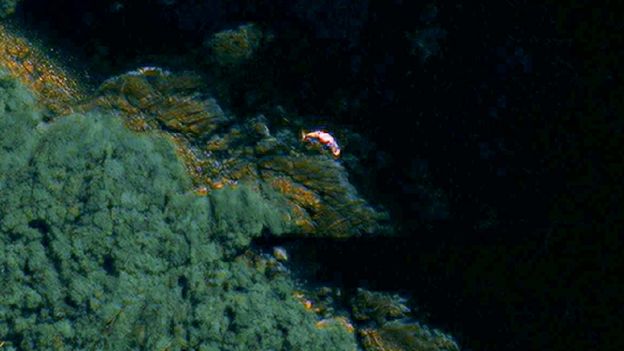 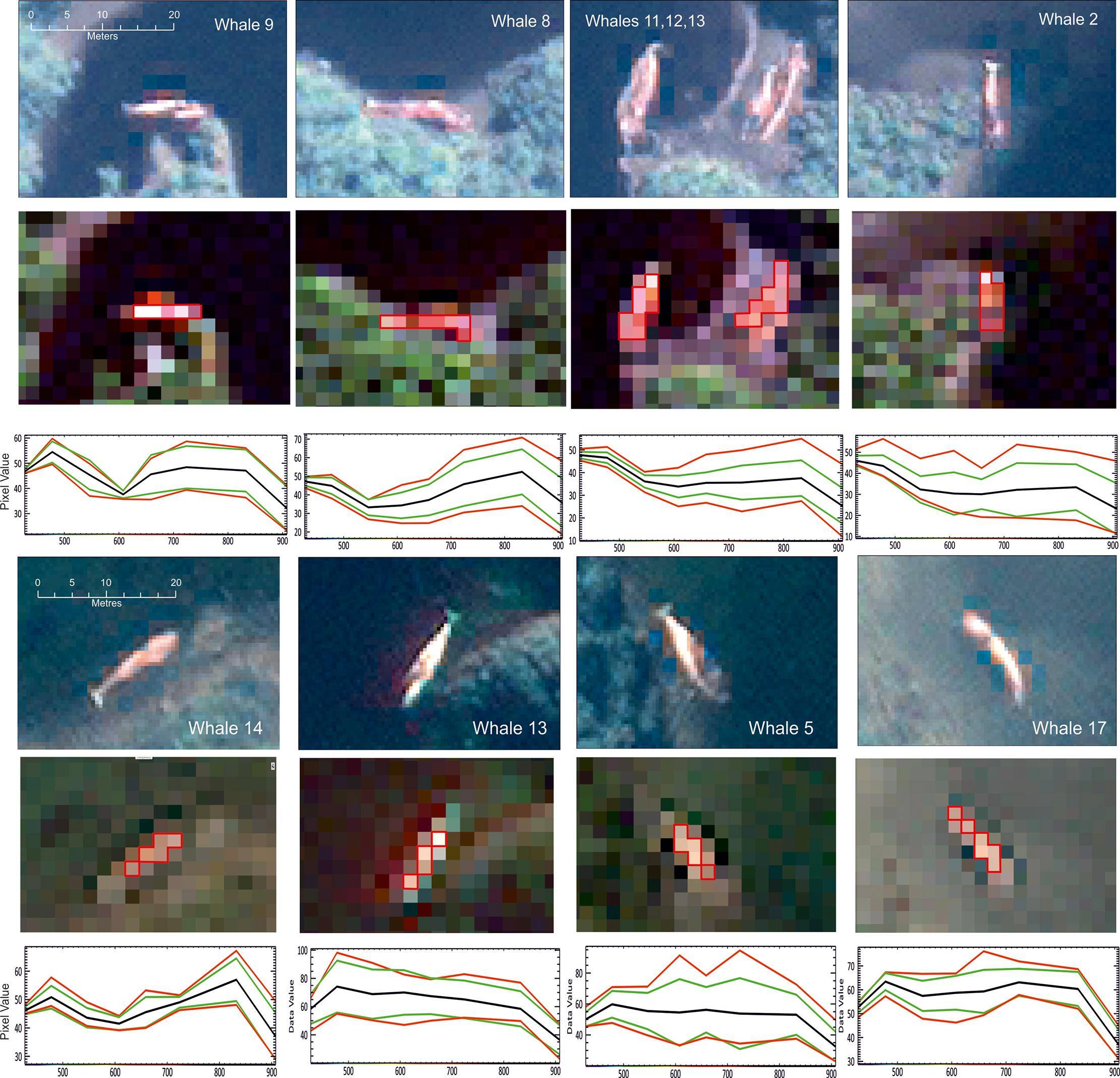 Fig 4. Image chips and spectral profiles from ten whales. At the top are whales from Image 1 and the bottom are from Image 2. The upper row displays detailed pan-sharpened images (spatial resolution 0.5 m) shown using visible bands of the satellite imagery. The second row is the multispectral band (2 m resolution pixels) used in the spectral analysis with the area of pixels chosen for each profile highlighted in red. The third row are the spectral profiles for each image showing Top-Of-Atmosphere radiance in the Y axis and wavelength in nanometers in the X axis. Imagery from DigitalGlobe Products. WorldView2 © 2019 DigitalGlobe, Inc., a Maxar company.

I am the walrus. Goo goo g'joob! 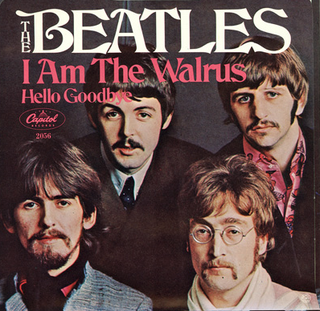 tl;dr: "WWF is running the "Walrus From Space" project jointly with the British Antarctic Survey"

From the BBC's Walrus counting from space: How many tusked beasts do you see?:

"One of the implications of not having the sea-ice to haul out on is that we're increasingly seeing walruses spend longer on land. And that comes with a number of impacts, which include overcrowding with the potential for calves to be crushed in stampedes. This happens. But also for local food sources to be depleted," he told BBC News.

WWF is running the "Walrus From Space" project jointly with the British Antarctic Survey, which has expertise in satellite surveys of polar wildlife.

BAS has long counted penguins from orbit, and is also now tracking seals, albatross, and even whales under the water.

"It's only recently that satellites have had high enough resolution to allow us to count walruses accurately," said BAS remote-sensing specialist Peter Fretwell.

"We'll be using Maxar's WorldView satellite which has a resolution where each pixel is only about 30cm on the ground. That's about the size of an A4 sheet of paper and we can easily count individual animals at that resolution." 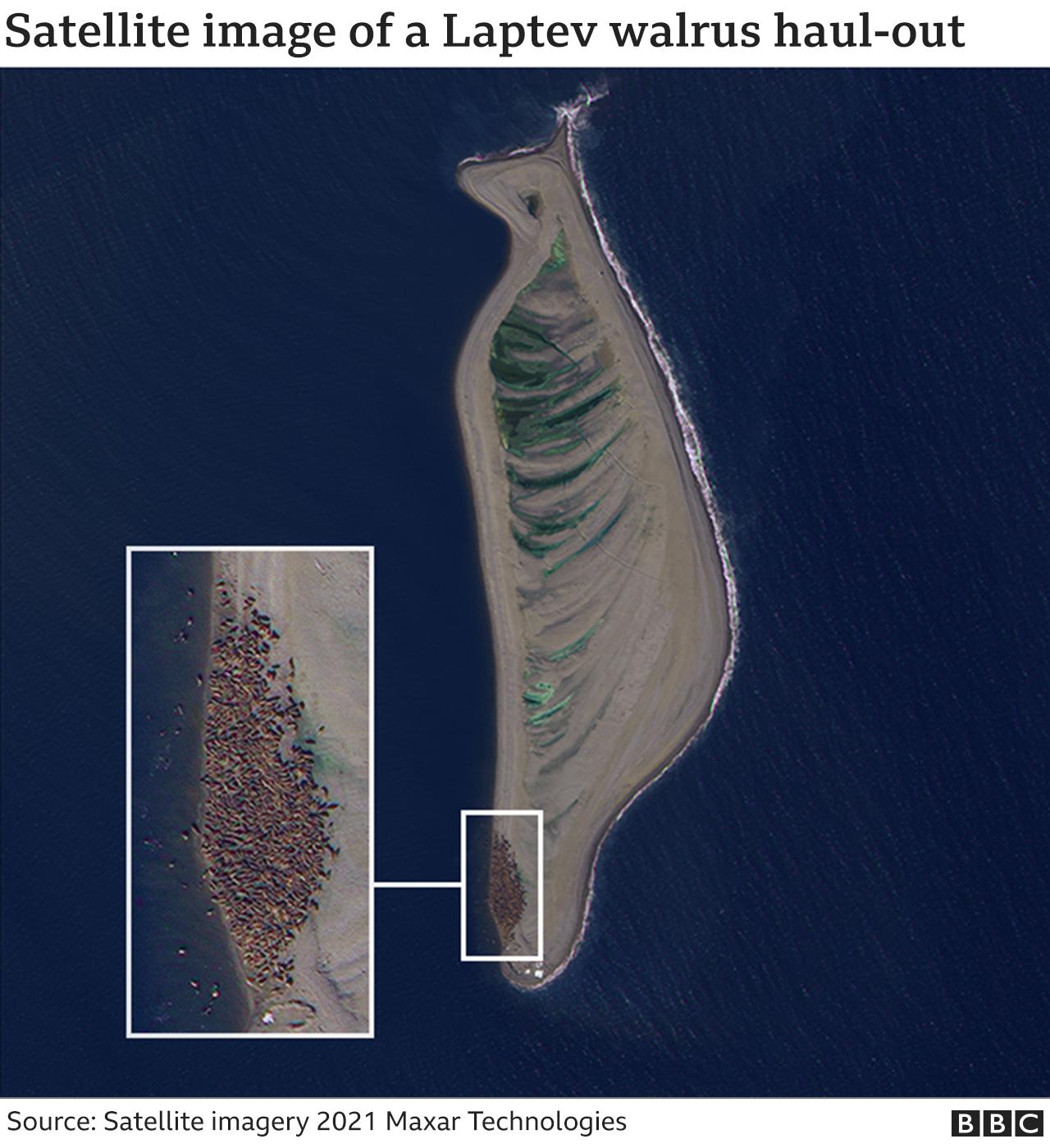 Not the answer you're looking for? Browse other questions tagged artificial-satellite earth-observation image-processing or ask your own question.

6
What are these Martian space-whale (or seagull) shaped features?
4
How will Icarus aboard the ISS track bird migration?
3
Can a satellite scan an entire continent to search for someone?
1
Are these images from Planet Labs? Are the images publicly available?
1
What is the highest resolution of infrared photography of Earth available from satellites?

2
Is docking satelites an option?
9
Can ISS astronauts see the lava from the Kilauea volcano at night?
4
How will Icarus aboard the ISS track bird migration?
2
Does NASA really measure PM2.5 concentrations from space?
39
Is it possible to observe space debris with Binoculars?
9
Commercial satellite retrieval - possible?
4
Get dates when a satellite has performed maneuver from historical TLE data (python)?
4
Tutorial for orbits from TLE data
9
Star-shaped artifacts in SAR images of the "Suez Canal traffic jam seen from space"