How the interface between de-spun platform and rotating parts of a spacecraft with artificial gravity could work? [duplicate]

You might have seen large rotating wheel space stations with central de-spun hubs or platforms in sci-fi movies like The Martian. 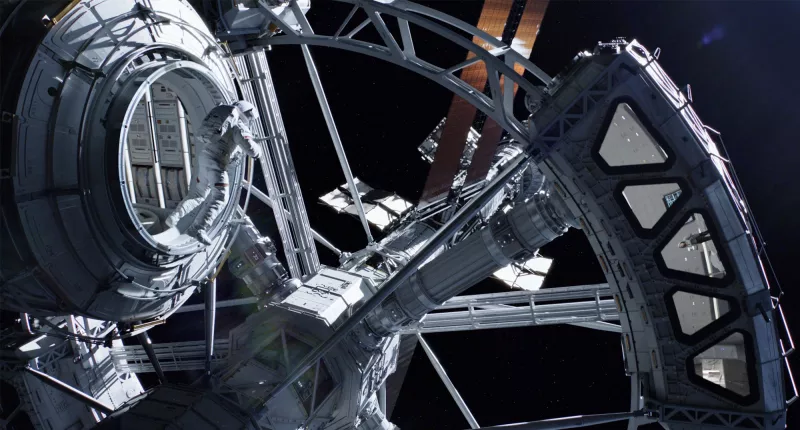 My question is, how could the sealing between the rotational and stationary modules work? It must be able to contain the pressure difference of near 1 atmosphere and meanwhile have the lowest friction possible. Any insights on the technologies involved and studies done? published papers, etc.

The station could be built as a stationary cylinder with a rotating wheel inside. No problem with rotating seals and their friction. But the volume and mass of such a station would be much bigger. But also a stationary torus containing a rotating wheel inside seems possible. The volume and mass of the torus would be much smaller. Adding spokes to the torus is possible. The rotation of the wheel might be stopped and started as necessary to enable an astronaut to change between zero and artificial gravity. But this would cause the whole station to rotate. But some kind of a rotating lift for transfer between stationary and rotating parts of the station would be possible.

Not the answer you're looking for? Browse other questions tagged crewed-spaceflight spacecraft artificial-gravity rotation or ask your own question.

25
How can you make a vacuum proof rotatable seal?

49
Why are there no spacecraft rotating for artificial gravity?
5
How could a spacecraft be continuously propelled if it rotates to simulate gravity (by tether)?
14
Artificial Gravity on board the ISS and its derivatives
4
Could the ISS be spun to simulate Phobos' gravity?
11
How does the freon compressor work at 0 gravity?
2
How much will Bennu rotate faster and faster with mirrors facing the Sun on its left side?
10
With six spacecraft currently docked at the ISS, how could Santa (or anyone else) deliver presents?
6
How much does the rotation of the Earth affect re-entry and could we go against it?
5
Could the BFR Tanker be used as an artificial gravity counterweight for interplanetary travel?
0
What is the connection (if any) between the new Artemis mission and the two Artemis spacecraft (Themis-B, -C)?