Was a large-nozzle variant of the J-2 ever considered?

The J-2 engine used on the upper stages of the Saturn launchers has a specific impulse in vacuum of 421 seconds. This is substantially lower than that of the smaller RL10, 440-460 seconds depending on the model. The RL10 has a greater nozzle expansion ratio -- 47:1 up to 280:1 depending on the model, compared to 27:1 for J-2.

While the 5 J-2 engines were fairly crowded in the base of the Saturn V second stage, the single engine in the third stage is not; a nozzle extension doubling its 2.1 m diameter to 4.2 m would still allow for reasonable clearance versus the 6.6 m stage diameter. This would increase the nozzle ratio to around 100:1, significantly better than the ratio of the 450 s versions of the RL-10, and with a higher chamber pressure.

The nozzle extension and the necessary lengthening of the interstage would add mass -- 5 tons or so, at a guess -- but even with that penalty, achieving 450 second specific impulse on the third stage could increase translunar payload by around 2 tons.

It's not particularly surprising that this approach wasn't used for Saturn/Apollo; developing and deploying a variant engine would come at a cost that might be better spent elsewhere.

Remember when the J-2X engine was proposed for the Ares I and V rockets? That featured a nozzle area ratio of 55:1. This ratio was the same as that of the original J-2X proposal. However, unlike the new design that would add performance through gas generator and chamber enhancements, the old J-2X was a simplification study.

The modern J-2X and its 55:1 expansion ratio could achieve a vacuum Isp of 448s or 451s, although this would operate at a chamber pressure above 1,200psi instead of the original 763psi.

As you mentioned, the clustered S-II arrangement of five engines would not allow for any increase in nozzle dimensions. You are also correct about S-IVB interstage length, which limited the J-2 size. But we must remember, too, that there are RL-10 variants with extending nozzles. 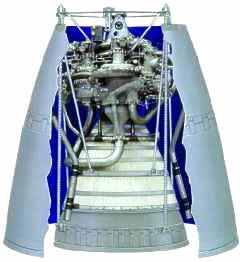 The J-2X was to be essentially a standard J-2 with an extension kit attached to the original nozzle exit. In the stowed position the J-2X would have the same length as the J-2, and the effective area ratio would still be 27.5:1. Upon actuation of the nozzle, it would extend (in a required time of under two seconds) and produce a 55:1 area ratio nozzle. This increased nozzle diameter could easily pass through the S-II/S-IVB interstage. The studies required that the extension kit weigh less than 204kg (450lb). Using this expansion ratio, the J-2 engine's vacuum specific impulse at a 5.5:1 LOX:fuel ratio would be increased by 10 to 11 seconds. This would be sufficient for a 3,200 to 4,200 pound improvement in Saturn V payload (I believe this was to TLI), minus the weight of the system.

Three different methods of extending the nozzle in flight were proposed. One system involved a one-piece nozzle extension that would surround the engine when stowed and lower down with hydraulic arms when deployed (much like the RL-10B-2). This proposal was discontinued due to its similarity with the XLR-129 engine under study (the shuttle engine that lost out to the SSME). A similar proposal would have broken the extended nozzle into several 'rings' that would telescope down over each other. However, the added complexity of the system caused it to be eliminated.

That left the Airmat design. This would involve a nozzle constructed from a strong woven mesh that would inflate into the desired nozzle shape as soon as the engine was started. Exhaust from the gas generator would be routed through the mesh nozzle, and this would also cool the material. This gas could only vent inwards, allowing film cooling. not only was this design simple in operation, but it was also lightweight. Therefore, it would likely promise the greatest payload gain.

This graphic shows the basic principle of the 'Airmat' design, complete with the exhaust venting through the inner wall for film cooling:

The three concepts that made the grade for final analysis: 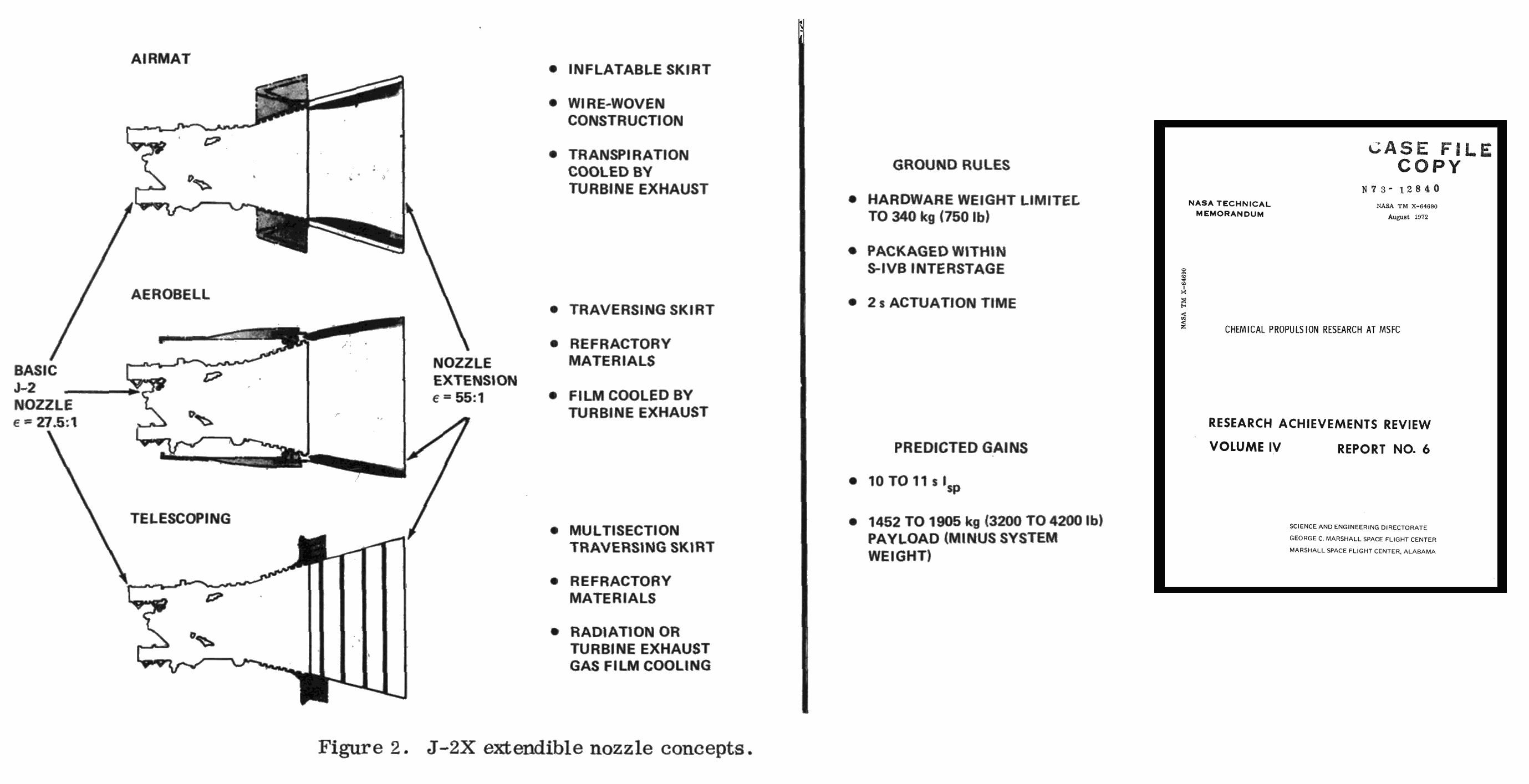 Hope this is helpful.

Not the answer you're looking for? Browse other questions tagged engines saturn-v specific-impulse nozzle j-2 or ask your own question.

3
How would the STS have differed if it used J-2's as the main engine?

7
Was the notion of using an air-started SSME on Ares-1 a reasonable idea?
25
What makes the Merlin vacuum engine so deeply throttleable?
10
What was the maximum thrust of the Rocketdyne F-1 engine?
3
How is the Rocketdyne J-2S area ratio larger than that of the J-2?
4
Is it possible to estimate the nozzle characteristics of the Rocketdyne HG3 engine?
15
Why was the Saturn V considered to be human-rated after Apollo 6?
4
What were/are the stingiest and most generous vacuum nozzle? (records for the smallest and largest expansion ratios)
3
Specific impulse of a rocket engine