With advances in chemical engineering, could chemical propulsion have a fuel (or fuels) that would allow it to compete with newer, more advanced form of propulsion (such as electrical or nuclear) or are the chemicals being used now likely to be as good as it's going to get?

Practical chemical rockets top out around 460 seconds Isp, with exotic, but impractical, propellants going up into the 500s.

Nuclear-thermal rockets (using the heat of a controlled fission reaction to accelerate hydrogen or other propellants) were expected to deliver better than 800 seconds Isp. Such engines were developed (NERVA, RD-0410) but never flown.

Competing on thrust instead of specific impulse, of course, the rankings are reversed; electrical thrusters have extremely low thrust-to-mass ratios, and chemical propellants very high ratios, with NTR in between.

Honestly, the efficiency of chemical rockets we use today are nearly maxed out for practical fuel combinations. Also, chemical rocket engines will most likely never reach the efficiency metrics of electrical and nuclear propulsion systems (the propulsive energy conversion is fundamentally different). However, when you need a substantial amount of thrust, the thrust to weight ratio of chemical propulsion systems dominates the playing field.

The combustion process used today in all rockets/gas-turbines is called deflagration, which is a relatively slow release of heat and a constant pressure combustion process. The only thing that can be done to raise the $I_{sp}$ for chemical propulsion systems (and is currently being studied) is detonating the fuel, which is a pressure gain combustion process. Detonation based propulsion systems come in two varieties (at least at the research and experimental level). The first is called the pulsed detonation engine (PDE), which has received a great deal of treatment since the early 90s. The second is the rotating detonation engine (RDE), which is heavily active in current aerospace research.

Here is a plot from an analytical study (Morris, C. I., “Numerical Modeling of Single-Pulse Gasdynamics and Performance of Pulse Detonation Rocket Engines,” Journal of Propulsion and Power, Vol. 21, No. 3, 2005, pp. 527-538.) that details the idealized performance of a single-cycle pulse detonation rocket engine vs the conventional steady state rocket engine (SSRE) for oxyhydrogen fuel. Note, the blowdown pressure ratio does not go to infinity (i.e. a vacuum) so comparison with the vacuum level performance is not reported, however, the idealized PDRE is more efficient than the conventional rocket engine over the entire operational blowdown pressure ratio range. Now granted this is all idealized performance, and harnessing the energy of detonation wave for thrust applications is generally very challenging. Here are some attempts in the laboratory setting at the academic level. This testing at the academic level is conducted by PhD students, however more sophisticated operations exist that are not open source at facilities like the Air Force Research Laboratory. 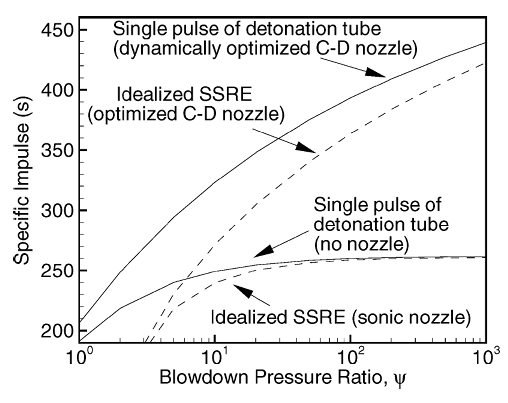 The RDE is a more sophisticated concept for a detonation based engine. It is more practical in application than the PDE, due to its non-pulse operation. Here is a schematic of the operation of the RDE. 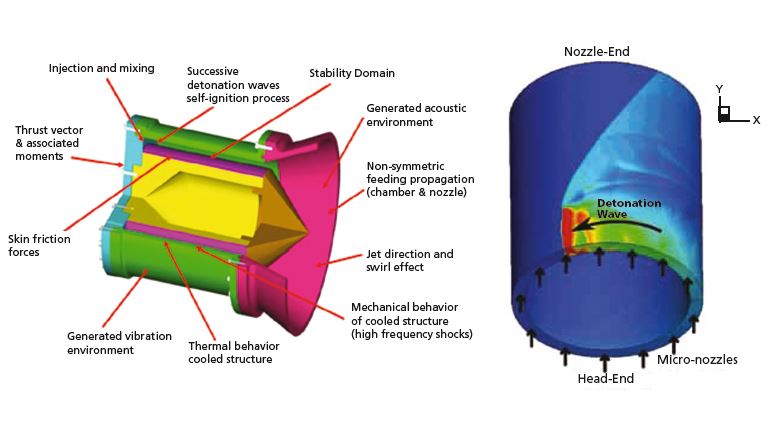 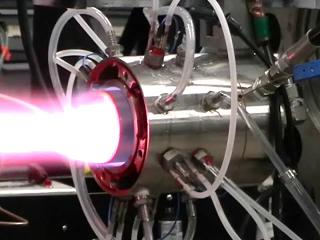 The RDE is actively being researched at many universities and industry companies (Aerojet/Rocketdyne and the Aerospace corporation to name a few). The primary goal as of now (economically convincing for funding) is to integrate the PDE/RDE into next generation gas turbine engines. However, the rocket application remains wide open given the maturing technology. Here are some videos of RDE testing at various universities:

Not the answer you're looking for? Browse other questions tagged fuel chemistry or ask your own question.

8
Is there a maximum Isp for "exothermic chemical reaction rockets"?

9
What are the deal-breakers with a preheated Hydrogen gas tank orbital rocket?
19
Could I home-brew my own rocket fuel?
21
Could 3D printing be used to achieve perfect grain geometry of solid and hybrid rocket motors?
9
Do any realistic rocket systems use different substances for propellant and fuel?
4
Why do we search for extra-terrestrial water?
2
Back to oribt from Mars - how many km^2 yr of solar power to make enough propellant?
4
Why can't an expander-cycle engine be built to use RP-1 or other non-cryogenic fuels?
4
Ion Drives specific impulse somewhat of a false economy?
3
Is there any way to get better performance from an NTR with non-H2 propellant?
7
Have light gases like hydrogen or helium been explored for ion propulsion?