In "spacecraft talk" is nadir just a fancy word for "down"?

Assume the approximation that the Earth is spherically symmetric — without higher order gravitational multipoles, and other effects that might be related to gravity from other bodies or the Earth's orbit around the Sun are ignored. Given a circular orbit, "down" would be a vector pointed towards the center of the Earth, and I think the "nadir" would be in exactly the same direction.

But in a realistic circular orbit, do "down" and "nadir" have any more nuanced meaning by convention or usage?

For example, there is a vector that is perpendicular to instantaneous velocity and orbital angular momentum, another that is the local gravity gradient, and yet another that points towards the Earth's center of mass.

All of these could be thought of as roughly "down" or in the direction of the "nadir", but are any of these (or something else) used preferentially or by convention?

note: This question is asking a lot more than just What are these orientations called in orbit?

There are some subtleties here. The fields where the concept of nadir are most important are nadir-pointing Earth observation satellites, satellites formation flying, and rendezvous and proximity operations. The latter two almost inevitably use some form of a local vertical / local horizontal frame (aka a Hill frame), in which vertical (i.e., nadir and zenith) points to / away from the center of the Earth. This is primarily because of the use of the linearized Clohessy-Wiltshire equations in these fields.

An even more subtle meaning is that nadir points in the direction of the point on the geoid that is closest to the satellite. This concept is important in satellite altimetry measurements of sea surface height. If this point is within the beam width of the radar altimeter, it is this point that will register as the satellite's altitude. Some other point will give an erroneous reading if this point is outside the altimeter's beam width. The distance between this point and the geodetic subsatellite point can be nearly a kilometer.

In the ISS Operations community, "zenith" and "nadir" are commonly used to refer to the Z axis directions relative to the ISS, instead of specifically Earth-pointing directions. (Although they got these names because the ISS does normally fly in an attitude that points the so-called nadir direction at the earth).

Here's an example from a crew procedure where one of the Node docking ports is referred to as the Nadir port - "ISS coordinates assume MPLM on Node Nadir". Pitching the station 180 degrees wouldn't cause this name to change, of course. 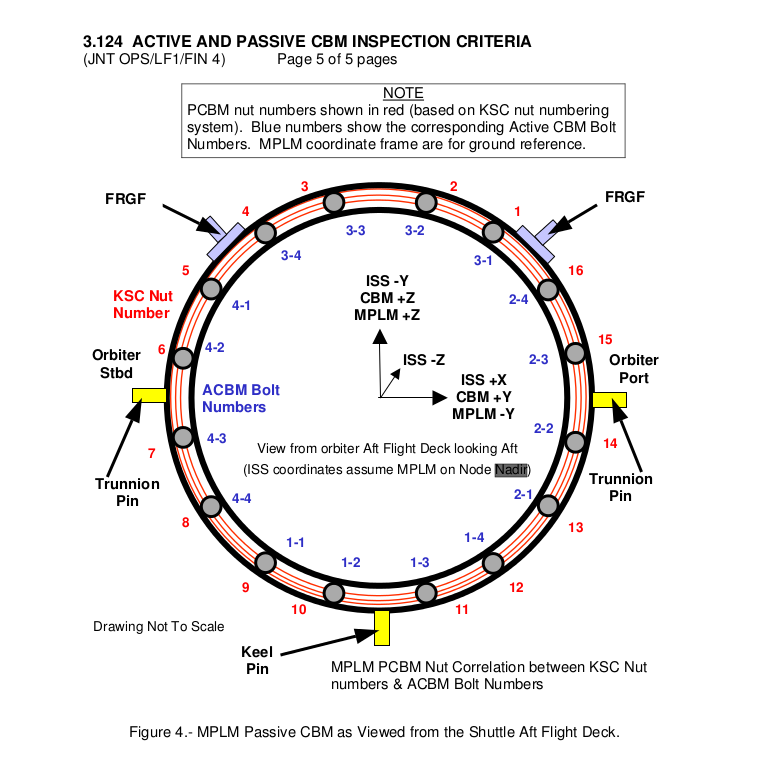 Here's an image from a "ISS Location Coding" lesson showing the same concept. 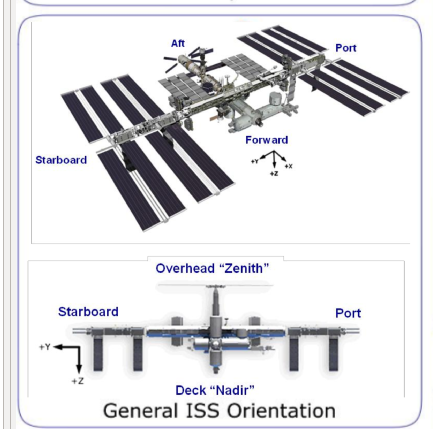 Not the answer you're looking for? Browse other questions tagged artificial-satellite mathematics frames or ask your own question.

22
What are these orientations called in orbit?
30
How is the altitude of a satellite defined, given that the Earth is not spherical?
17
What are quaternions and how are they used to represent spacecraft dynamics?
4
Do Curiosity's reported measurements of Mars' surface gravity (~3.717 m/s^2) include centrifugal effects?
4
Did the ISS just turn upside-down? Nauka docking attitude maneuvers; did the cupola near pointing zenith and therefore show only black sky w/ stars?
4
Does the ISS have a rotational motion in addition to its translational motion?
6
How were Frenet frames and Gram–Schmidt orthonormalization used in spacecraft orbit calculations?
4
What's the difference between zenith and radial?
3
How to calculate the angle between the satellite and ground station?
-2
What precisely is downrange distance - how is it defined mathematically?
See more linked questions

8
Gravity drag Delta-v calculation for launches to orbit
8
How can an orbiting spacecraft's motions yield the orbitee's deep structure?
2
Can orbital maneuvers be performed by a solar sail to correct eccentricity?
5
Spiraling out from circular orbit to escape via low thrust, what is γ (gamma)?
3
Low-thrust spiraling to escape, is the flight path angle (gamma) at C3=0 always 39 degrees?
1
Help with my tensor tension; how to derive and calculate this rigid body gravity gradient torque?
10
Launching east from a mountain on the equator at midnight during a new moon; ranking of each contribution?
2
Any exact analytical solutions for non-Keplerian orbits; those around non-radially symmetric mass distributions (e.g. J₂≠0)?