How will the Lucy spacecraft move from Jupiter's L4 to its L5 Trojan asteroids?

After having visited the L4 leading Trojans ("Greeks") of Jupiter, almost a decade after launch Lucy will spend almost 4½ years moving on to the trailing L5 Trojans, 5 AU away. Is there a special window of opportunity of trajectories that motivates this huge traverse across the inner Solar system in order to fly by another asteroid? 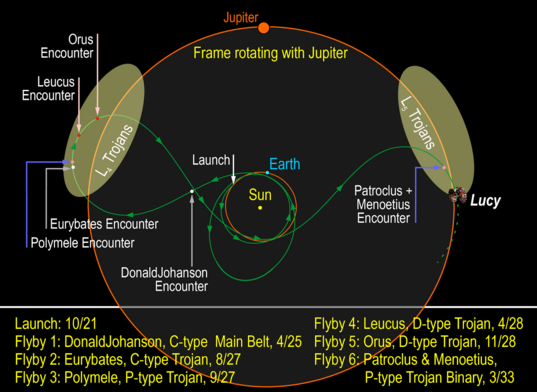 Image is from a document if the Lunar and Planetary Science Conference 2016. The Lucy mission is commented by blogger van Kane here.

To get from Earth orbit to Jovian orbit takes a lot of energy - You need to turn your nearly circular orbit round Earth into a Hohmann transfer orbit (an ellipse with the other end out by Jupiter's orbit) and then once you are there you need to reduce the elliptical extremes by expending more energy to move your orbit to match Jupiter. If you then wanted to come back in towards the sun you need to expend yet more energy to move the ellipse once more. These changes are your delta-v budget.

However in this case Lucy is not in a Jovian orbit. It is in a highly elliptical orbit, as @Hobbes pointed out, and one end of that ellipse is already within Earth's orbit. So it doesn't require any further delta-v to come back in towards the Sun and out again. All that is required is a much smaller energy cost to aim the outermost end to be at L5 rather than L4.

Not the answer you're looking for? Browse other questions tagged trajectory asteroid mission-design lagrangian-points or ask your own question.

5
Does the Earth have any Trojan asteroids?
4
How will they mine asteroids?
8
How does one spacecraft best visit multiple asteroids?
2
How can one spacecraft (MANTIS) fly by multiple (7) asteroids?
7
How could the laser from Earth to a spacecraft be used other than to propel its light sail?
7
How will the SpaceX ITS return from Mars?
2
How much will Bennu rotate faster and faster with mirrors facing the Sun on its left side?
4
How will JWST maintain its elliptical orbit around L2?
4
How big would a collection of asteroids near the Moon's L4 point need to be to aggregate naturally into a "stepping stone" for space exploration?