Are transfers between two orbits commutative?

Are the propellant mass and transfer time from orbit A to orbit B the same as from orbit B to orbit A, considering low-thrust propulsion? That is, in the case of dealing with Keplerian orbit parameters and having both points in the sphere of influence of Earth with any third body or perturbation effects neglected. In other words, can we say that the return transfer is a "mirror copy" of the forward one? If that is not generally the case, then under what conditions can we witness such symmetrical transfers?

TL;DR: No, continuous thrust maneuvers introduce too many complexities for the "return" trajectory to be a mirror copy.

For continuous thrust maneuvers, we need to consider how many orbital parameters we want to change at once, and whether we plan on having a minimum efficiency during that transfer. Even if only one orbital parameter is changed at once, then we still can't have a mirror trajectory: this is because each orbital element will have an important effect on the optimum thrusting to change that element, as shown in Fig 1 below. Then, if attempting to change multiple orbital elements at once, we have to select which of the six "summation" control laws we wish to use (Petropoulos, Ruggiero, Naasz, and a few more). Each will emphasize the change of one orbital element more than another, and they all will lead to different "return" trajectories. 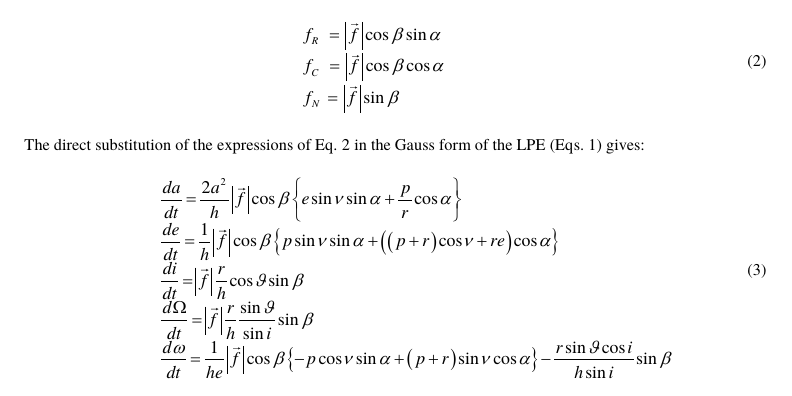 Sources: those of my MSc. thesis on continuous thrust applied to return interplanetary mission designs. I also hope to open source my propagator in the coming weeks or months, which should allow anyone to try out a variety of missions and control laws for continuous thrust missions.

The answer is no except in the mathematically idealized case where the reaction mass used is negligible and the engine is an idealized device capable of making any force up to some maximum.

Let's consider a Hohmann transfer orbit from a lower orbit to a higher orbit. This requires a $\Delta \textbf{v}_1$ out of the lower orbit and a $\Delta \textbf{v}_2$ to insert into the higher orbit. The force exerted on the spacecraft during one of the burns is $\textbf{F}=m\textbf{a}$, where $m$ is the mass of the spacecraft, which is a function of time because we're expending reaction mass. The mass is large during the low-altitude burn and smaller during the high-altitude burn.

Now let's time-reverse the motion. Under time reversal, $\textbf{a}$ stays the same, which means that $\textbf{F}$ has the same direction. But $|\textbf{F}|$ doesn't stay the same, because $m(t)$ is now a different function. In this version, the mass is large during the high-altitude burn and smaller during the low-altitude burn. This breaks the symmetry.

However, when the reaction mass is negligible and the engine is an idealized device capable of making any force up to some maximum, $m(t)$ is a constant function, and time-reversing the orbit keeps $\textbf{F}$ the same.

This argument does not depend on the assumption of a Hohmann transfer orbit, which was just illustrative. The only assumption was that the gravitational field was static.

None of this actually depends in principle on whether it's low-thrust or high-thrust propulsion, continuous acceleration or acceleration in short burns. However, because of the high exhaust velocities used in low-thrust propulsion, it may be a better approximation to say that the reaction mass is negligible. I would assume that this is why, in the numerical example given by ChrisR's answer, there is at least approximate symmetry.

Given no third body effects, atmospheric drag, etc, and an instantaneous burn, the amount of fuel required to switch to an orbit is the same as is required to return to the previous orbit. This assumes the following:

For the low thrust case, however, the profile of the thrust changes. You have more thrust at the end of the maneuver, which will change the optimal trajectory slightly. I suspect moving to the closer orbit would take less fuel then moving to the higher one, but I haven't do a simulation to actually prove that. I suspect that except in extreme cases, where most of the mass of the spacecraft is fuel, then this is essentially the same.

Not the answer you're looking for? Browse other questions tagged orbital-mechanics artificial-satellite orbit orbital-maneuver delta-v or ask your own question.

10
Thrust and rotation strategy to circularize a standard GTO orbit using ion propulsion?
5
Maneuver to the optimal point of a given orbit

7
How could transfers between SEL1&2 and EML Lagrange points be utilized?
8
Is space mining and development as shown in the television show “The Expanse” realistic?
12
Transfer between elliptical orbits
19
Is the ideal transfer between two arbitrary planar orbits always a bi-tangential ellipse?
3
What is the angle between two orbits in the equatorial plane?
3
Why are JPL using this expression to emulate Schwarzschild orbits?
1
On the dynamics of two connected objects located at different circular orbits
2
Minimum deltaV between two Orbits (re Jonathan McDowell tweet)
2
General Delta V Calculation for Two-Body-Problem