What goes into the planning and execution of the deployment of groups of LEO satellites?

I was among many watching SpaceX's exciting OrbComm-2 mission (Falcon-9 Flight 20, 22-Dec-2015), and besides the first successful landing of a 1st stage after an orbital mission, the deployment of the eleven OrbComm satellites made for great imagery. By watching the (nearly full) Moon, you can even see the 2nd stage perform roll maneuvers between each successive deployment.

You can see this in SpaceX's 'promo trailers' for example. In fact it is this specific visual that brought me to SXSE (Space Exploration Stackexchange) a year ago - as evidenced by my first salvo of questions here! Since I hadn't heard of TLEs yet, I was "scraping" websites to get the positions of the satellites so I could watch them drift apart. The first image (below) is from my very first SXSE question, and the second is from one of my most recent questions.

So while I've learned an amazing amount about satellites and space exploration in hundreds of little pieces, I'd like to see how several of the pieces fit together.

Question: What goes into the planning and execution of the deployment of groups of LEO satellites?

I think a good answer might include at least a cursory outline (e.g. 2-3 sentences maximum) of things like:

EDIT: By "cursory outline" of an item I mean name it, describe what it is and why it's important in a very basic way. I'm not looking for a technical description of any item at depth. Instead, just looking for a basic view of the breadth of the task.

Each of those questions include some links to the missions and images of the stacking of the satellites. 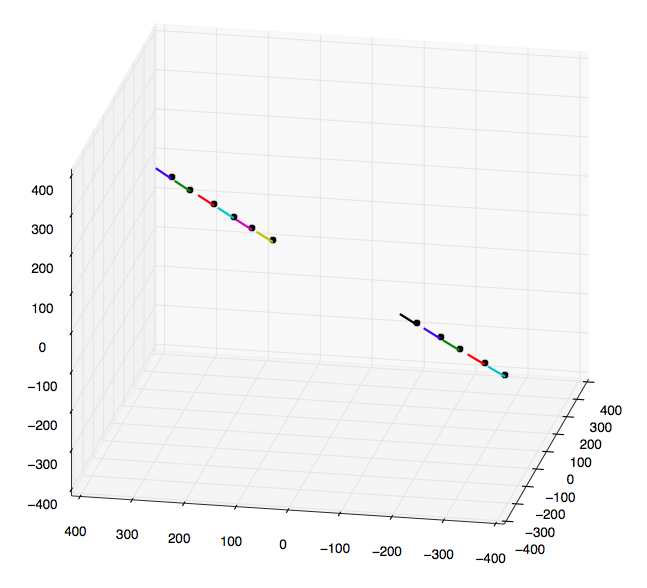 above: 3D plot of the eleven OrbComm satellites flying in formation interpolated to a single point in time (14:00:00 UTC 24-DEC-2015) from my first question here. Units are kilometers, the axes are approximately Earth Centered Inertial (ECI), the origin is the average position of the group, and the short line segments behind each point represent the previous 5 seconds of movement.

above: SpaceX deployment of the OrbComm-2 satellites GIF made from cropped screenshots of the SpaceX technical broadcast. The nearly full Moon is the white circular object at the lower extreme left.

I devised the plan for the ORBCOMM Gen 2 deployment while I was the Systems Design Lead for the spacecraft. Looking back on our plans and analysis, the first step was to select a scheme that met the customer requirements to first minimize the chance of recontact between the spacecraft (and also the LV) on subsequent orbits as well as allow the vehicles to move into final even dispersed positions around the orbit within the required 120 days. To minimize recontact I selected separation vectors that were mostly aligned with the velocity and anti-velocity direction but would yield slight variations in inclination as well. Spring forces were selected to provide phasing within the 120 day timeframe and varied to ensure that each pair has maximum "miss distance" one orbit later. Finally, the dynamics engineers analyze the tolerances on alignments, spring force, and timing to ensure tip off with this plan keeps the tumble rate within what the ACS system can null out in the amount of time we have with our batteries before we deploy the solar arrays. This plan allows an all spring initial phasing and gives us well over a month to check out the satellites and commission and test the propulsion system before it has to be used to stop the drift rates and lock the spacecraft into their final phased positions. The OG2 prop system is a single hydrazine thruster so the ACS system is used to point it in the direction needed. Falcon 9 provided deployment confirmation on pointing and timing in near real time and the Air Force tracking office provided initial TLE's within about 90 minutes and our first telemetry contact with groundstations included GPS data to allow us a third way to establish our orbit.

I'd be happy to answer any other questions about the process if you're interested.
On CYGNSS I was the power systems lead and present for initial on orbit operations so I had some exposure to the process they used (which was similar), but on that project there was no propulsion system, we just adjusted the flight attitude of the vehicles to alter the vehicle drag profiles. In this case, we had a number of initial attitude anomalies that had to be solved the first week of operations, which lead to a lot of variable drag that was unplanned, so we ended up just taking the spacecraft which had ended up lagging the line and maximizing its drag first to get it moving toward the right phasing. Once its separation from it's neighbor was right then the neighbor was drag maximized to get it to begin phasing from the next spacecraft up the line, and so on.

Not the answer you're looking for? Browse other questions tagged low-earth-orbit satellite-constellation payload-deployment cygnss orbcomm-2 or ask your own question.

43
What's the baseball bat for? (seen in CRS-8 berthing NASA TV broadcast)
5
How can the CYGNSS spacecrafts (actually) measure ocean roughness?
4
Rocket to launch 8 cubesat to LEO at an equidistant distance
6
How are multiple low orbit communication satellites per launch distributed along an orbital plane for global coverage?
5
A nicer way to download the positions of the Orbcomm-2 satellites
5
How were the 10 Iridium NEXT satellites deployed by SpaceX?
5
What pattern of satellite release will the pentagonal Iridium arrangement use?
3
What is final positioning of rideshare satellites (like transporter-2 mission) and how do they get there?
2
DId the Falcon 2nd stage turn around [UPDATED] and point "backwards" before the Orbcomm-2 deployement started?

17
What was the distant bright light in the SpaceX webcast of Orbcomm OG2 deployment?
5
A nicer way to download the positions of the Orbcomm-2 satellites
2
DId the Falcon 2nd stage turn around [UPDATED] and point "backwards" before the Orbcomm-2 deployement started?
54
Is 75 meters an exceptionally close distance for two satellites to pass at >6,000 m/s?
5
What pattern of satellite release will the pentagonal Iridium arrangement use?
5
How were the 10 Iridium NEXT satellites deployed by SpaceX?
5
What does the StarLink constellation look like now? Numbers of planes and inclinations?
8
Why does the F9 second stage roll back and forth during deployment of each RADARSAT satellite?
2
What orbits are Starlink satellites now deployed into? How low to do they go on their first perigee?
3
What is final positioning of rideshare satellites (like transporter-2 mission) and how do they get there?