Are there other companies than Bigelow Aerospace planning to offer a space hotel?

After reading up on the matter I noticed that there currently are only two options to remain in space for longer than a few hours:

And two upcoming commercial alternatives that provide a longer stay in space (24+ hours):

Which provide hope as steppingstones for human space exploration. Especially since Bigelow Aerospace has already been testing their inflatable module on the ISS!

Though the initial press message of Orbital stated it would be available in 2016, which it was not. On top of that the website of Orbital Technologies had its most recent messages in 2011.

So Orbital Technologies' prospects don't look too promising anymore, which led me to question:

Are there any other commercial competitors which intend to provide long (24h+) space stay?

Axiom Space, run by people with management and astronaut experience from the ISS, plans to have commercial customers in space by 2020. First with their module docked to the ISS, and when the ISS is retired, as its own multi-modular space station. Here's a long radio interview on The Spaceshow this January 6th. 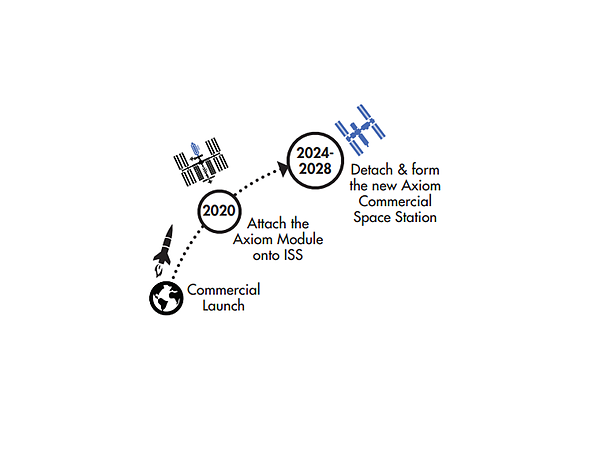 Not the answer you're looking for? Browse other questions tagged crewed-spaceflight space-station commercial tourism or ask your own question.

64
Is there no physical security in space, other than being in space?
3
Are there any non-government owned, non-US based, companies that are in the process of developing manned spaceflight?
6
Are there any private space probes presently active?
9
Will any of the COTS providers be able to perform expedited rendezvous with the ISS?
3
Are US Space companies favored to purchase subsystems from US only suppliers. Are there any specific laws that dictate this?
6
Are there active proposals for the next large space station (post-ISS) to use artificial gravity?
1
Psyche & others will use Maxar 1300 series platform; are these the first instances of a commercial communications satellite bus sent to deep space?
4
What are the longest current rocket payload fairings, capable of carrying long space station sections?