What was the first proper Two Line Element to be generated?

In this question I describe looking for a TLE for Mercury-Atlas 6, the spacecraft piloted by John Glenn on February 20, 1962. I'll post here the relevant information:

I am not sure this is because there was a TLE that was "retired" or if this is just a placeholder for the mission but no TLEs (worth posting at least) were generated. So I am not sure if the earliest TLE I might find available in space-track in 2017 would be the first official TLE ever generated.

One could generate historical TLEs from other forms of orbit data or parameterizations, but I'm not interested in the TLE with the earliest epoch.

Thus: What was the first proper Two Line Element to be generated?

This is more of a really-long comment than an answer, sorry, as it just narrows it down a bit. But I wanted to include links and quotes, so I put it in Answer form.

First, it's not clear that what we call "two-line elements" today are the first two-line-thing-that-describes an orbit. The current two-line elements are based on the SGP4/SDP4 orbital model. The SGP4 part of that came into existence in the early 70's:

Five mathematical models for prediction of satellite position and velocity are available. The first of these, SGP, was developed by Hilton & Kuhlman (1966) and is used for near-Earth satellites. This model uses a simplification of the work of Kozai (1959) for its gravitational model and it takes the drag effect on mean motion as linear in time. This assumption dictates a quadratic variation of mean anomaly with time. The drag effect on eccentricity is modeled in such a way that perigee height remains constant.

The second model, SGP4, was developed by Ken Cranford in 1970 (see Lane and Hoots 1979) and is used for near-Earth satellites. This model was obtained by simplification of the more extensive analytical theory of Lane and Cranford (1969) which uses the solution of Brouwer (1959) for its gravitational model and a power density function for its atmospheric model (see Lane, et al. 1962).

The next model, SDP4, is an extension of SGP4 to be used for deep-space satellites. The deep-space equations were developed by Hujsak (1979) and model the gravitational effects of the moon and sun as well as certain sectoral and tesseral Earth harmonics which are of particular importance for half-day and one-day period orbits.

That puts modern two-line elements as 1970.

Hoots (whose name seems to be all over this topic) talks about earlier work in "History of Analytical Orbit Modeling in the U.S. Space Surveillance System" (JOURNAL OF GUIDANCE, CONTROL, AND DYNAMICS Vol. 27, No. 2, March–April 2004; sorry, only have paywalled link, but there's a shorter public version; see also Weeden & Cefola, "COMPUTER SYSTEMS AND ALGORITHMS FOR SPACE SITUATIONAL AWARENESS: HISTORY AND FUTURE DEVELOPMENT"):

The first formalized effort to catalog satellites occurred at the National Space Surveillance Control Center (NSSCC) located at Hanscom Field in Bedford, Massachusetts. ... [O]bservations were transferred to the NSSCC by teletype, telephone, mail, and personal messenger. There a duty analyst reduced the data and determined corrections that should be made to the orbital elements before they were used for further prediction. After this analysis, these corrections were fed into an IBM-709 computer that computed the updated orbital data. These updated orbital data were then used in another phase of the same computer program to yield the geocentric ephemeris. From the geocentric ephemeris, three different products were computed and sent back to the observing stations for their planning of future observing opportunities.

The first, a bulletin, was a listing of the updated orbital elements and was the forerunner of today’s two-line element set.

(He goes on to describe the content; clearly not our current two-line format yet)

By 1964, there were elements that used two lines:

The tracking operation of NAVSPASUR (Naval Space Command) adopted the entire 1959 solution of Brouwer with the modifications developed by Lyddane to avoid small divisors of eccentricity or the sine of inclination. This analytic satellite prediction model is now known as Position and Partials as functions of Time (PPT3). The equations of the original PPT model were implemented on an IBM 7090 computer in 1964 under the guidance of Richard H. Smith, who also provided supplemental equations to account for atmospheric drag. ...

The Naval Space Command two-line element sets can be used for prediction with PPT3. All equations to follow are adapted from Schumacher and Glover “Analytical Orbit Model for U.S. Naval Space Surveillance: An Overview". The element set consists of

(not our current TLEs, but clearly a relative)

At roughly the same time, another line of development (which would become SGP4 by way of SGP) was taking place:

The other path from journal article to operational implementation took place in Colorado Springs. In 1961, the NSSCC was relocated to Colorado Springs, Colorado, and became known as the Space Detection and Tracking System (SPADATS) Center. ... Following the rehosting in Colorado Springs, Hilton provided updated documentation of the NSSCC algorithms. In 1960, Aeronutronic had begun developing the astrodynamics basis for a new system. The analytic orbit prediction model was based on the works of Brouwer and Kozai. To avoid small divisors of eccentricity or the sine of inclination, Arsenault et al. transformed the solution to a series in non-singular parameters, keeping only the most important terms. They included from Brouwer only those long- and short- period terms in position that do not contain eccentricity as a factor. They also adopted from Kozai the non-Keplerian convention relating mean motion to semimajor axis. The model is known as the simplified general perturbations (SGP) model. ... In 1964, the SGP model became the primary orbital prediction model for the SPADATS system.

The improvement offered by an analytic rather than an empirical density model led to a decision to implement the development of Lane and Cranford. However, by 1969 the number of satellites in the catalog had grown to a point that computers would not be able to manage the extensive terms in the model. Consequently, a simplified version of the Lane and Cranford work, known as SGP4, was developed and implemented operationally in 1970.

But what was the output form of SGP? Was that a near-TLE, or something different?

Early in it's history, it's clear the distributed products were different. Four line (and card!) elements seemed to be the common form. For example, the 1963 report "The SPADATS Mathematical Model" ESD-TDR-63-427 Appendix B says:

This appendix defines the relationships between the internal elements used by the SPADATS Model and the various output formats. It also presents some of the formulation used to update elements after a differential correction.

The orbital element statidard format for NORAD SPADATS use has been established to allow Teletype transmission and automatic tape-to-card or card-to-tape conversion. Line 0 is used only for descriptive material of primary interest in connection with the issuance of bulletins. Lines 1 through 3 contain all the numerical values of the orbital elements used in computations and some additional values of interest (the anomalistic period, the perigee height, and the rate of change of the period) which would not be used in calculations. Finally a check sum is placed at the end of each of lines 1 through 3 to allow detection of transmission errors.

It goes on to show the card formats; cards were apparently still pretty unfamiliar: 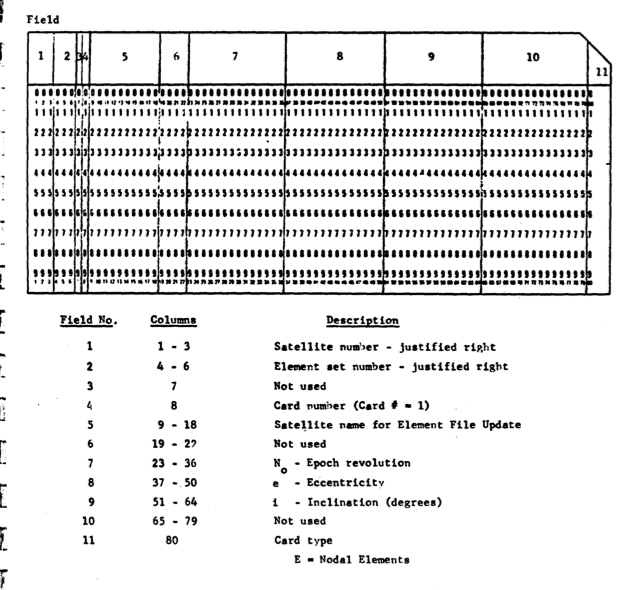 This SGP output was quite different from current formats. It seems that the move to the simplified SGP4 calculation made it less necessary to send as much detail for recomputation, and led to the 1970 two-line product.

So I think it's fair to date our modern two-line elements to sometime in 1970.

As to the actual answer to this question, which was the earliest one generated, that's harder to say. The models themselves are not in terms of two-line elements; there's a lot more to them. The TLEs are just the output form that's generated when it's time to deliver a tracking product to users. That would indicate (but doesn't prove) that the first one generated would have been the oldest satellite still flying as of some date in 1970, as that would have been the one on the top of the output list....

I'm not sure why MERCURY 6 doesn't have a TLE, but suspect it's due to the short duration of the flight (3 revs).

Not the answer you're looking for? Browse other questions tagged two-line-elements spaceflight-firsts or ask your own question.

10
Where to look for historical or reconstructed orbit data for early NASA missions - Mercury-Atlas 6 for example
3
Is there an API for accessing old TLEs of non-historic objects?
1
Can the deactivated satellites also be tracked through TLE?

10
Where to look for historical or reconstructed orbit data for early NASA missions - Mercury-Atlas 6 for example
3
Why are there some NORAD catalog IDs larger than 80000 in space-track?
4
What caused the ISS Two Line Element Day of Year problem beginning 12-24-2019?
6
How do two-line element sets handle rev numbers > 99,999?
10
Will the new "TLE format" be orbitally-mechanically better than traditional TLEs?
1
Does the James Webb Telescope have a Two Line Element set?