On Earth we have the idea of constant ground temperature. Builders in North America think of it as 55 degrees at 5 feet down (not quite true, but close enough). At the surface it varies with the day. A little deeper and it averages the week. The deeper you go, the more it lags behind until you get to 30 feet where it is constant, roughly equal to the annual average of the area.

In considering an underground lunar settlement, the constant ground temperature in the first 60 meters or so, where you might tunnel is a really relevant. Since the lunar day is so long and the temperature varies so much, one would think the depth at which constant temperature occurs would be deeper than earth. But maybe soil in a vacuum transmits heat less? I think it would probably vary a lot by latitude as well. The thought of having an underground settlement where the ground temperature is naturally comfortable to people is fascinating.

Do we know what the constant lunar underground temperature is? And at what depth it stabilizes? Is there any place on the moon where it might be in the 40˚ to 80˚F range?

Without atmosphere, equilibrium temperature at 1AU is about -17C. I would expect that to be the temp "near" the surface around the equator. Colder as the latitude increases.

Reading the references, it seems that the diurnal oscillation (what Earthies might call "monthly" or Lunies might call "daily") in temperature decays with a 1/e depth of about 30 centimeters, so by the time one reaches 1 meter, the temperature "stabilizes" temporally, but of course will increase with depth since the Moon's interior is hot. You can see this in Figure 2 of the last paper ("Subsurface temperature histories, covering 3.5 years...") where the oscillations in temperature at different depths along the probe are plotted.

Further, some of this data can already be found in @KimHolder's question Does the temperature near the surface of the Moon rise rather quickly with depth? who quotes as NASA News article Down the Lunar Rabbit-hole which then quotes Mark Robinson of Arizona State University, principal investigator for the LRO camera.

"The tunnels offer a perfect radiation shield and a very benign thermal environment," says Robinson. "Once you get down to 2 meters under the surface of the Moon, the temperature remains fairly constant, probably around -30 to -40 degrees C."

Why the difference between the "ground truth" actual temperature measurements discussed below and the quote of a quote? 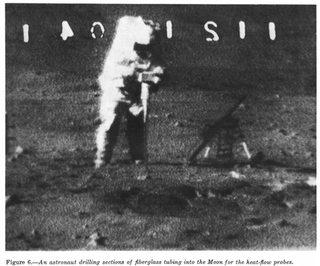 (image source also here) My guess is that the -30 to -40 number is a mid-latitude number, while the following concentrates on nearer to equator values. There's no physical way the temperature can drop by 10 or 20C in 1 meter of increasing depth, so the difference is more context and location.

I'm not an expert on planetary science, but the oft-cited number for an average sub-surface temperature about 1 meter below the surface seems to come from the following papers:

The heat-flow experiment is one of the Apollo Lunar Surface Experiment Package (ALSEP) instruments that was emplaced on the lunar surface on Apollo 15. This experiment is designed to make temperature and thermal property measurements in the lunar subsurface so as to determine the rate of heat loss from the lunar interior through the surface. About 45 days (1 1/2 lunations) of data has been analyzed in a preliminary way. This analysis indicates that the vertical heat flow through the regolith at one probe site is 3.3 × 10−6 W/cm2 (±15%). This value is approximately one-half the Earth's average heat flow. Further analysis of data over several lunations is required to demonstrate that this value is representative of the heat flow at the Hadley Rille site. The mean subsurface temperature at a depth of 1 m is approximately 252.4K at one probe site and 250.7K at the other. These temperatures are approximately 35K above the mean surface temperature and indicate that conductivity in the surficial layer of the Moon is highly temperature dependent. Between 1 and 1.5m, the rate of temperature increase as a function of depth is 1.75K/m (±2%) at the probe 1 site. In situ measurements indicate that the thermal conductivity of the regolith increases with depth. Thermal-conductivity values between 1.4 × 10−4 and 2.5 × 10−4 W/cm K were determined; these values are a factor of 7 to 10 greater than the values of the surface conductivity. If the observed heat flow at Hadley Base is representative of the moonwide rate of heat loss (an assumption which is not fully justified at this time), it would imply that overall radioactive heat production in the Moon is greater than in classes of meteorites that have formed the basis of Earth and Moon bulk composition models in the past. 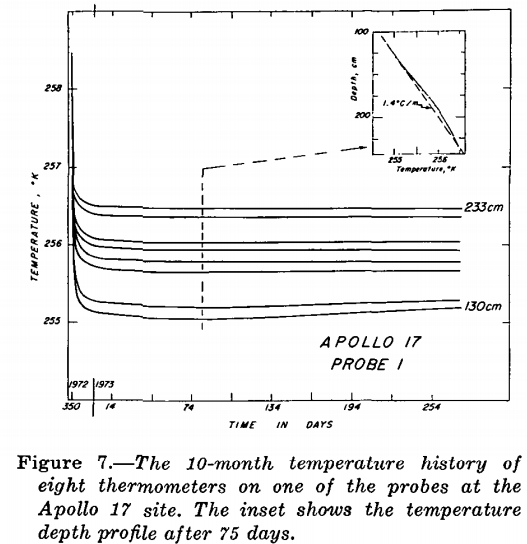 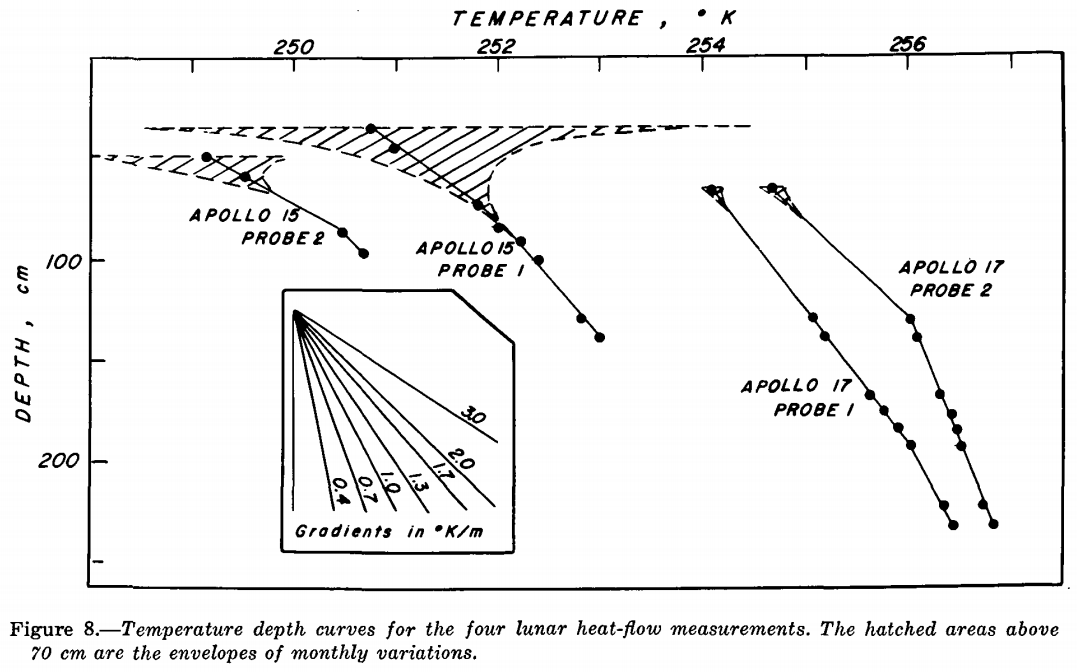 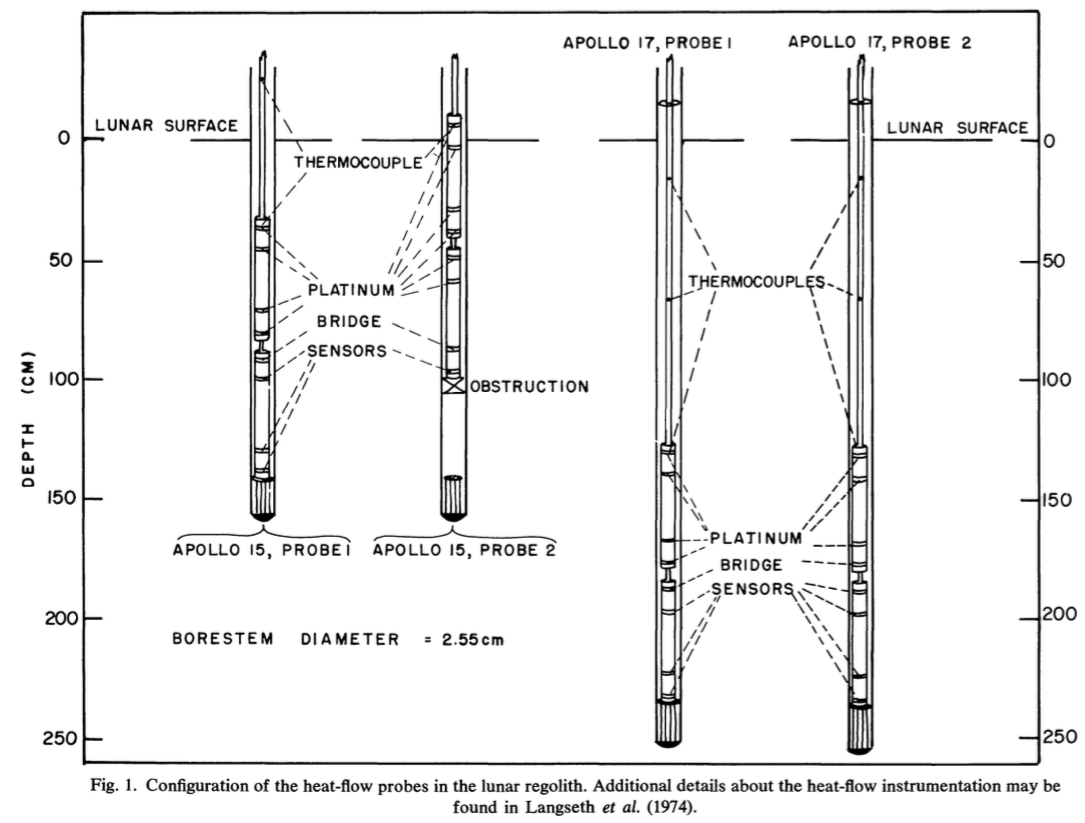 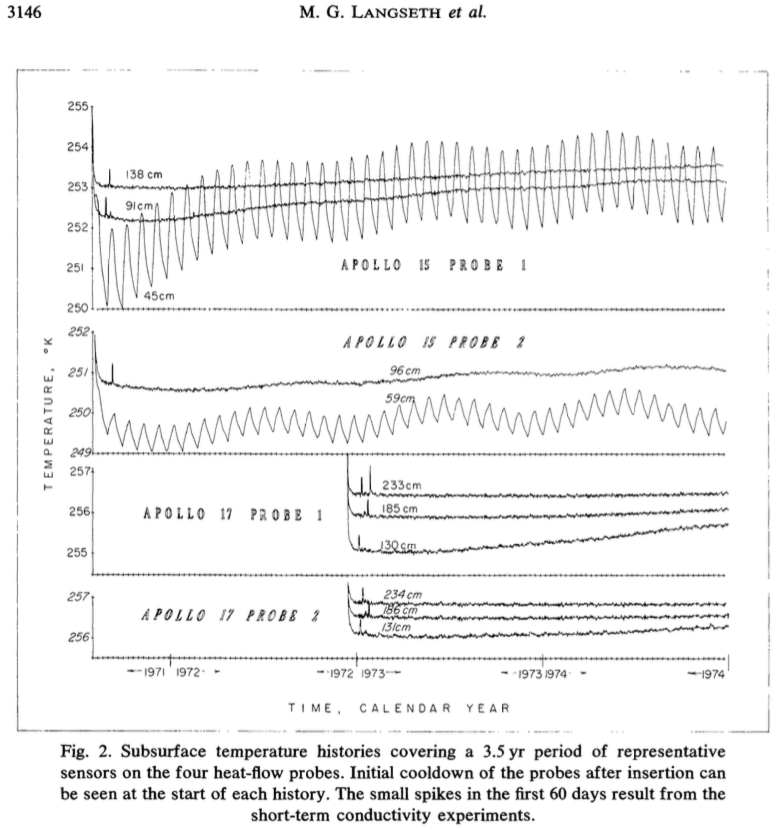 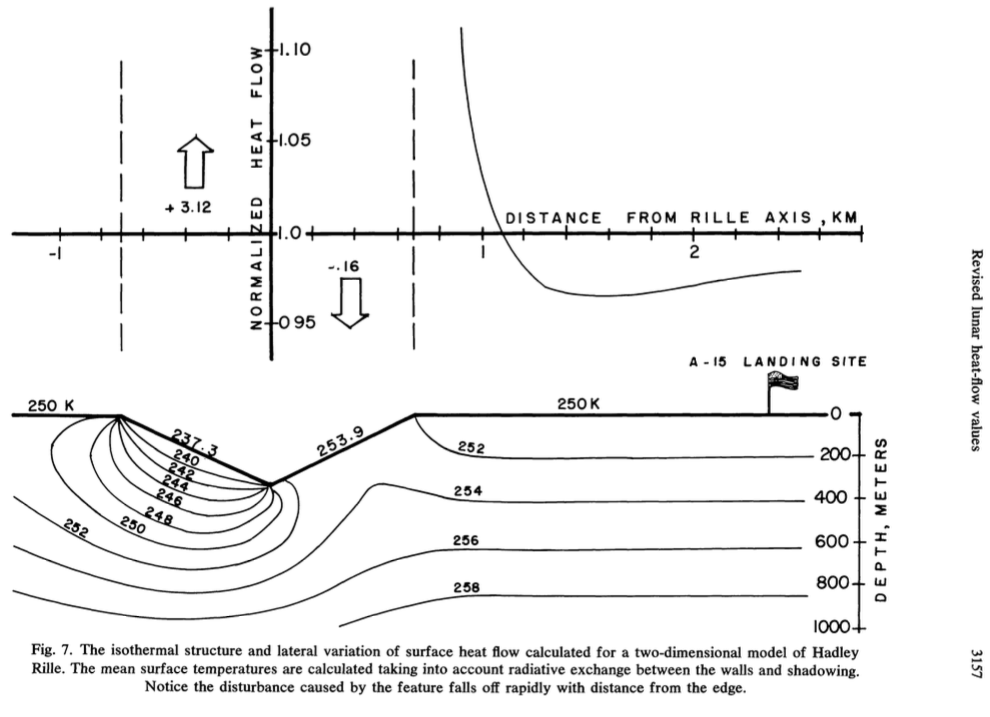 Not the answer you're looking for? Browse other questions tagged the-moon colonization geology or ask your own question.

27
What is the deepest we have penetrated a terrestrial body other than Earth?
29
How deep could a lunar mine go?
6
Where to get data of the received/measured moon temperature of the last 50 years?
7
Does the temperature near the surface of the Moon rise rather quickly with depth?
4
How thick does lunar regolith ever get? Has the thickness been measured and mapped by satellite?
5
Would there be snow, rain, fog or clouds in a deep, sealed, subsurface cavern on the Moon if water were present?
2
Most efficient method of storing energy with water on the moon?
2
Why are the heat sensor probes in HP3 probe spaced with reducing gap with depth?

15
How hard is the Lunar surface?
7
What is the temperature of the lunar core?
5
Lunar sub-orbital trajectories
8
Might thermal mass, reflective insulation, and limiting light penetration allow heat control on the Moon? (reboot)
3
If a high-temperature melt of lunar soil cooled slowly, what layers might appear?
3
An eternal lunar day?
2
Lunar surface illumination levels
34
Why are there mountains/mounds in the centre of craters on the lunar surface?
13
Is there dirt or its structural equivalent on Mars?