Who does these mesmerizing simulations of the phases of the Moon? And how?

It's lunar new year here and people will be lighting fire crackers and launching bottle rockets off and on until dawn, so I thought I would read up on it. EarthSky.org's Moon Phases update Your new moon is January 27 or 28 is really interesting, including some photos of actual new moons by Thierry Legault, the photographer who's taking those amazing photos of the ISS passing in front of the Sun, or the Moon.

But the next item down, Lengths of lunar months in 2017, is also really interesting both technically and visually, because it has this amazing GIF of the moon's changes in appearance over one orbit, shown below. This version is much better quality than the one from Wikipedia that I've used here and here. But I am not sure where it's from or how to read about it.

The information for the Wikipedia-sourced animation is difficult for me to understand already. The period is a "Draconic Month of nodes", but is that actually the same thing as the time between successive apogees? The issue here is how to generate a smooth, cyclic GIF, since an exact simulation would be jumpy - no two orbits are the same in the real world.

Also, how is the shading calculated, what kind of shader is used (diffuse reflectivity model) for the oblique sunlight incidence?

While an actual answer would be fantastic, a link to a source of the information would be helpful as well.

EDIT: As pointed out here by the GIF's creator, the original image is actually in Wikipedia.

I made the images on wikipedia with my own software. The original on wikipedia is here: https://commons.wikimedia.org/wiki/File:Lunar_libration_with_phase_Oct_2007.gif

The main work needed is getting the proper position of the moon with its precessing elliptical orbit, while the orientation is based on a constant rotation rate. This book is an older one, but has sufficient terms to predict eclipses.

And yes, just standard diffuse lambert shading, brightness based on the cosine angle between a surface normal and the sun direction. Its actually not an accurate model for the moon which is much brighter near full moon. (And the dark side has a constant brightness, while the real moon darkside is lit most by earthshine in small phases, and even near new moono, its actually much much dimmer) https://en.wikipedia.org/wiki/Lambertian_reflectance

Creating animation like this is fairly simple using rendering tools such as POVray. All you need is a cylindrical projection map of the moon and appropriate data for the orbit of the moon. The orbital elements available on wikipedia are good enough for most uses.

For example here is some of my own work as a still image. Earth from the north pole with all of the known earthquakes mapped, size is intensity, and color is depth.

Source code available, though the explanation is nearly non-existent. 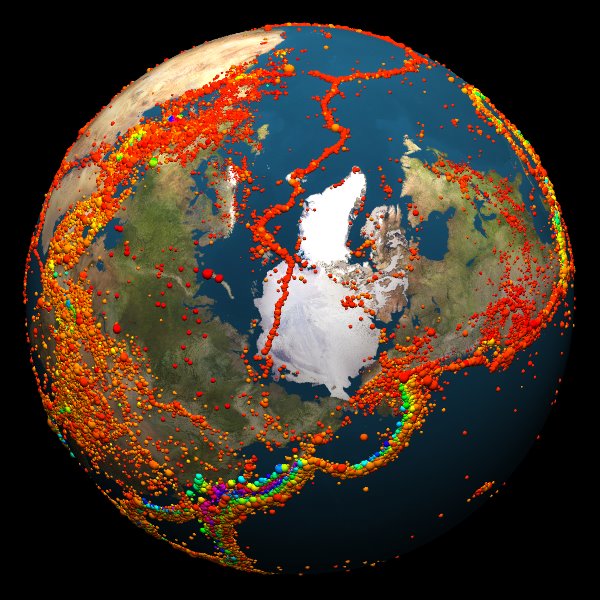 This is a reasonable good primer on animations and orbit with POVray. The method for putting an image onto a sphere is described here.

Finally, this site has a script to at least produce stills (animations just require the coding from the previously mentioned animations page)

The photos used are not views of the moon as seen from earth, but multiple orbital images that provide a direct overhead view of the entire moon.

Those images are applied as a bitmap texture to a very simple 3d model - a sphere. I'm not sure on the exact shader settings used, but those images look pretty close to the default appearance of a grey sphere.

Then all you need is a script that tells you where to put the moon, camera and light source for each frame as per the related question.

The smooth cycling comes from careful date selection. Both animations start and end at apogee so that the apparent size is consistent between the first and last frames, and the dates are chosen so that this coincides with a new moon. A dark frame hides any small differences that may exist, and the terminator is not visible, so it doesn't matter if the next orbit would be lit from a slightly different angle.

The draconic month (time between apogees) is two days shorter than the synodic month (time between new moons), but that shouldn't be enough to cause serious issues - it is the equivalent of three frames that can reasonably be dropped if they occur near new moon when the terminator is not visibly moving much.

Not the answer you're looking for? Browse other questions tagged the-moon simulation space-art or ask your own question.

43
Is pinging the Moon with a laser as shown on “The Big Bang Theory” possible?
10
How “locked” are Pluto and Charon? How much does each librate as seen from the other?
8
What are these structures on the Lunar Ranging Retro Reflector (LRRR) arrays for?
2
Ephemeris for lunar body-centered body-fixed coordinates?
0
Roughly express how much of our Moon's apparent libration amplitude seen from the Geocenter is due to different effects?

7
What happens to a spacecraft crashing into the Moon?
2
Ephemeris for lunar body-centered body-fixed coordinates?
4
Who are the space artists behind these images of the Boeing X-20 Dyna-Soar?
5
Is the Uphoff-Crouch cycler orbit with 3 passes impossible?
7
How were Apollo spacesuits cooled during simulations/rehearsals on Earth?
4
Did Conrad and Bean balk at entering the 650-foot-wide Surveyor Crater, or just express concern? What data had they seen?
1
Bucket loop between Earth and Moon?