I am interested in orbital refueling, not for satellites (though that’s a good idea) but for manned exploration and infrastructure. For instance, to support a lunar base we would want regular flights with reusable craft. The best mission profile would depend on an inter-orbital transfer vehicle that never lands. Instead it shuttles between LEO and lunar rendezvous with landers that stay at the moon and never return to earth. There is a lot of refueling in these schemes. Space-X’s Mars plan for instance, depends heavily on refueling in orbit.

A quick search shows there have been some refueling studies as well as tests and at least some space station refueling. They discuss the problem of boil-off of cryogenic fuels, and list various solutions.

But one thing I have not seen much about is liquid surging and settling. When under thrust it’s not a problem, but in micro gravity, how can we keep the liquid at the drain? Bladders wouldn’t work with most fuels. Centrifugal propellant settling would certainly work, but how? A rotating baffle could spin the liquid in the tank, but it would create turbulence against the walls. Also the way oxygen tanks like to explode, it would be nice to keep machinery out of the tanks. That’s what happened to Apollo 13. One could rotate the whole depot and either have a counter-rotating connection, or spin the ship when it docks, a la 2001. But that’s an awful lot of work just to feed a drain.

Does anyone know how it is envisioned to handle weightless liquids in tanks?

Shuttle orbital manuevering / attitude system tankage used screens to ensure that fluid always remained at the tank exit. Sufficient fluid would cling to the screens to get the engines started.

The screens are shown in this schematic of an Orbital Maneuvering System tank. In this case the screens are only at the aft because this system always provided thrust in roughly the tank axial direction. (schematic from the Crew Operations Manual, linked below) 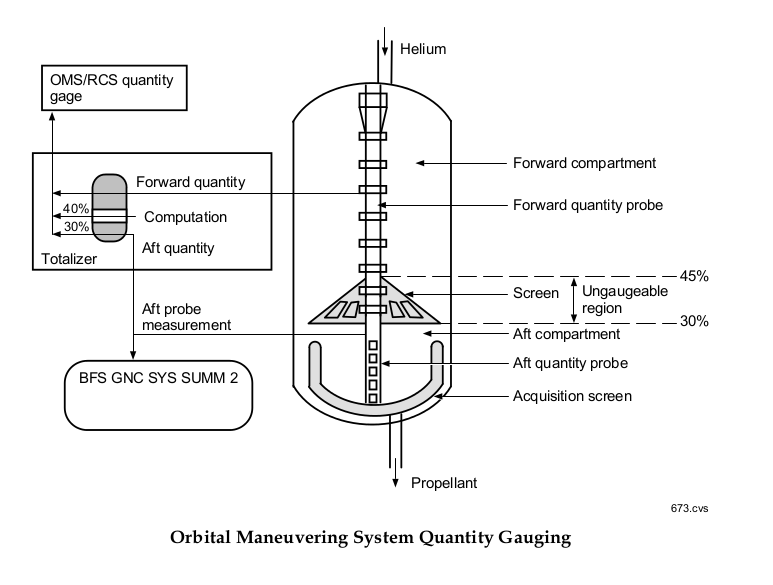 The spherical Reaction Control System tanks needed to feed at any (or no) acceleration vector and had screened galleries that girdled the inside of the tanks. 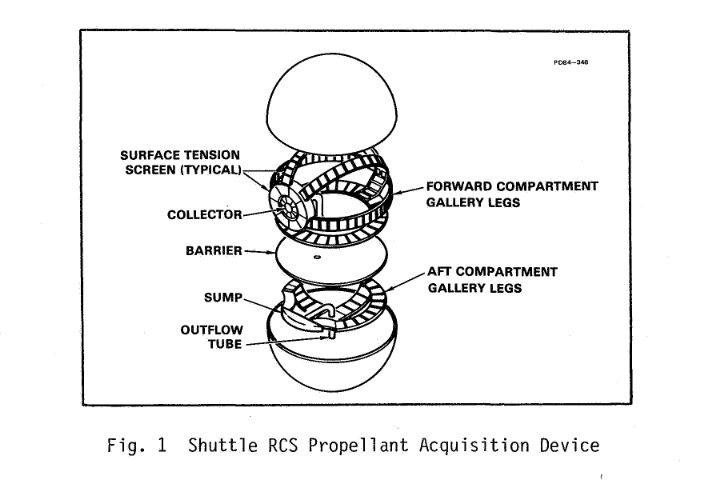 It's conceivable that such screen/acquisition gallery technology may be applicable to large-scale free-fall refueling designs. It does add weight to the tankage, but at least has the advantage of being a completely passive system. I don't know if it's been tested in a free-fall, high-flow situation (as I assume the refueling ops would be).

Ullage (i.e. getting the fuel at the end the tank you want it to be at and the pressurant at the other end) for large rocket stages in free-fall is usually handled with small auxiliary thrusters.

For small thrusters, it's practical to use bladder pressurization or some other solution; you use the small thrusters to slightly accelerate the large stage, and the fuel settles at the tail end.

It seems reasonable to use the same strategy for a fuel depot.

For the Salyut 6 space station, both Progress cargos and the station used bladder tanks.

The tanks were pressurised using nitrogen. The nitrogen could be recovered once the operation was done (at least on the station side).

To vent the pipes, they just let them open, exposed to vacuum for a week then purged with nitrogen.

Not the answer you're looking for? Browse other questions tagged fuel-depots refueling or ask your own question.

5
Would fuel depots allow lighter fuel tanks for post LEO use?
10
Why would orbital fuel depots make sense?
32
Has in-space refueling been done?
13
Viability of orbital refueling
6
What are the economics of upgrading versus refueling satellites?
11
Has on-orbit refueling ever been demonstrated with cryogenic fuels?
9
What is the extent of on-orbit refueling experience at the ISS? Which fuels? which spacecraft?
5
How does the economics of orbital refueling vs bigger rocket work?
8
Refueling a Mars mission on the way