What are the two bright objects separating from the Falcon 9?

On the recent Iridium 1 launch the separation of the first and second stages can be seen at T+3:50. In the following screenshot we see the second stage burning at the lower left of the frame and the first stage dropping away at the upper right.

What are the two bright objects perceived between the first and second stages in the image? 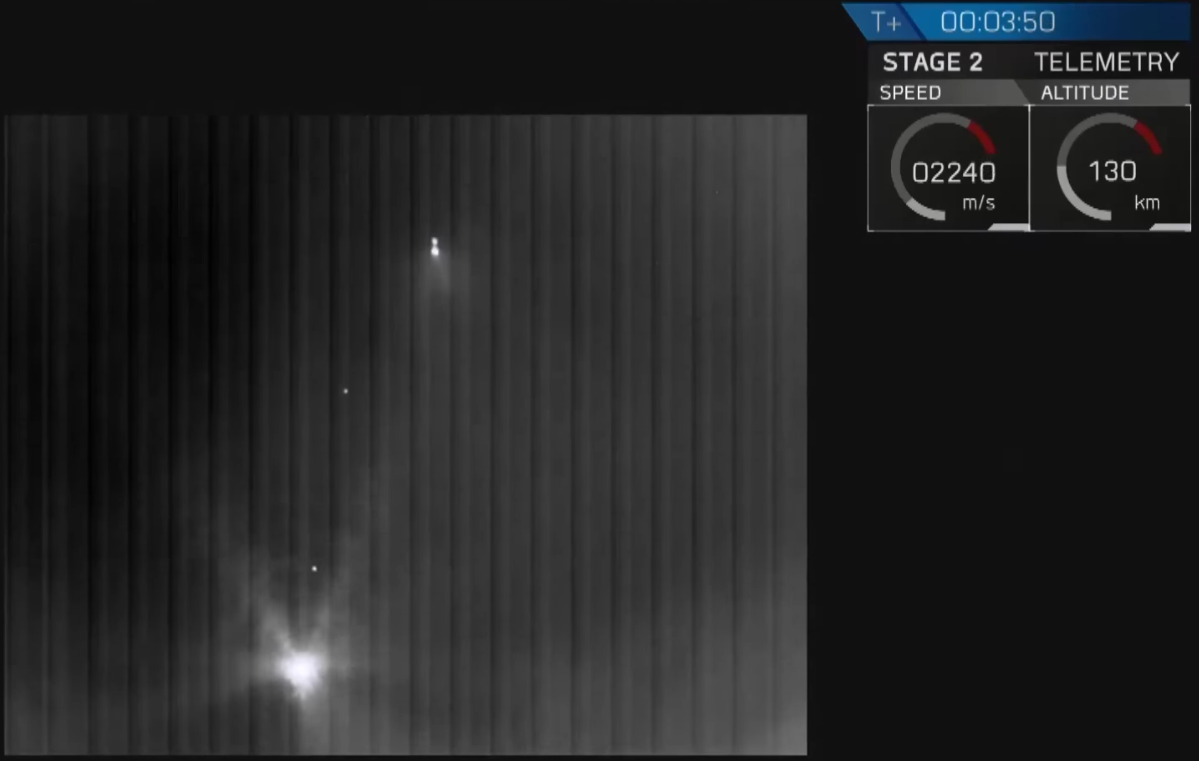 I think that's the fairing (the shell around the satellites on top of the second stage).

The fairing separates into 2 halves, those are the only objects large enough to be visible in this photo. At T+3:18 of that video, you can hear one of the technicians say "Fairing separation confirmed". Right after that, the first bright object separates from the second stage.

They look like the fairing separating. It turns out that if you reuse the first stage, but throw away the fairing and second stage, the next most valuable thing that might be worth recovering is actually the fairing.

They are large, somewhat complex structures. Need to be light, strong and large. There has been speculation that they are attaching thrusters of some kind to the fairings to test different approaches to recovering the fairings from launch.

There has been speculation that one of the recovery ships, based on its location during ASDS operations is trying to recover the fairing if it made it back through the atmosphere.

The beauty of the SpaceX model is that with so many launches, they can keep trying different ideas until they get it just right. Their model includes the cost of the fairing in the launch already, so experimenting with it after separation can be a cheap way to test things that are very hard to test on the ground.

You can see this with their recovery of the first stage attempts, where they kept trying with minor tweaks (grid fins, more hydraulic fluid, better legs, 3 burns, 2 burns, 1 engine burns, 3 engine burns) until they got it right. Now they seem like it is odd that EcoStar 23 will be an expendable flight. Normal has become recovering the stage.

28
What makes 21st century fairings so valuable that they'd potentially be recovered and re-used?
18
Falcon 9 fairings cost and reusability
16
How strong and "hot" is the wind on the payload after the fairing is deployed at ~110km?

6
Was any first stage recovery system tested on SpaceX Falcon 9 flight seven?
23
How does SpaceX plan to achieve reusability of the Falcon 9 *second* stage?
5
Are these objects other satellites in the SpaceX webcast of Jason-3 deployment?
10
What is the cause of the blue light from LH2/LOX rocket engines?
3
Why is the Falcon 9 upper stage tumbling so much after separation? (SES-10)
15
What is the cause of this Falcon 9 first stage "dance" after landing?
8
Why did this fairing separation happen at such a high altitude? (SpaceX Iridium-6/GRACE-FO)
5
Efficiency and timing of the Iridium-6/GRACE-FO low-power burn and coast phase?
4
What are these cartridges with holes on the Dragon trunk?
3
What are the needle pins that go through the pneumatic pushers of the Falcon 9 fairing?