How strong and "hot" is the wind on the payload after the fairing is deployed at ~110km?

In the question What makes 21st century fairings so valuable that they'd potentially be recovered and re-used? I said:

21st century fairings are much more than passive rooftop boxes to "keep the wind off of the customer's stuff."

In the discussion in comments below this answer, the criteria for a safe altitude for fairing ejection was discussed. I did a quick check of five SpaceX webcast videos and their corresponding press kits, and found that the five fairing deployments were tightly clustered around an altitude of about 110 km, independent of (ground) speed or time after secondary engine start.

I've included an estimate of the target inclination. With that and the latitude at deployment, the actual air speed could be estimated, but I'm really looking only for rough ballpark numbers.

Satellites are built to endure huge g-forces during launch, but those forces on each component are proportional to the mass of the component. So any given section of all that light weight (kapton or mylar?) film wrapping the satellite may not experience a very large g-force in terms of Newtons, but once the fairing deploys, some surfaces will be exposed to very low pressure but very high velocity winds.

In addition to the force of the wind (momentum transfer) there is also energy transfer, and that will scale faster with velocity than the momentum transfer. So even if the bulk mechanical forces turn out to be low, there can be local drag-induced heating, and things that conduct heat poorly (like thin polymer films for example) could develop hot spots.

Further, considering that 110 km is between the E and F layers of the ionosphere, there will be a substantial electron and ion wind, which might also cause trouble.

Question: How strong and "hot" is the wind on the payload after the fairing is deployed at ~110km? 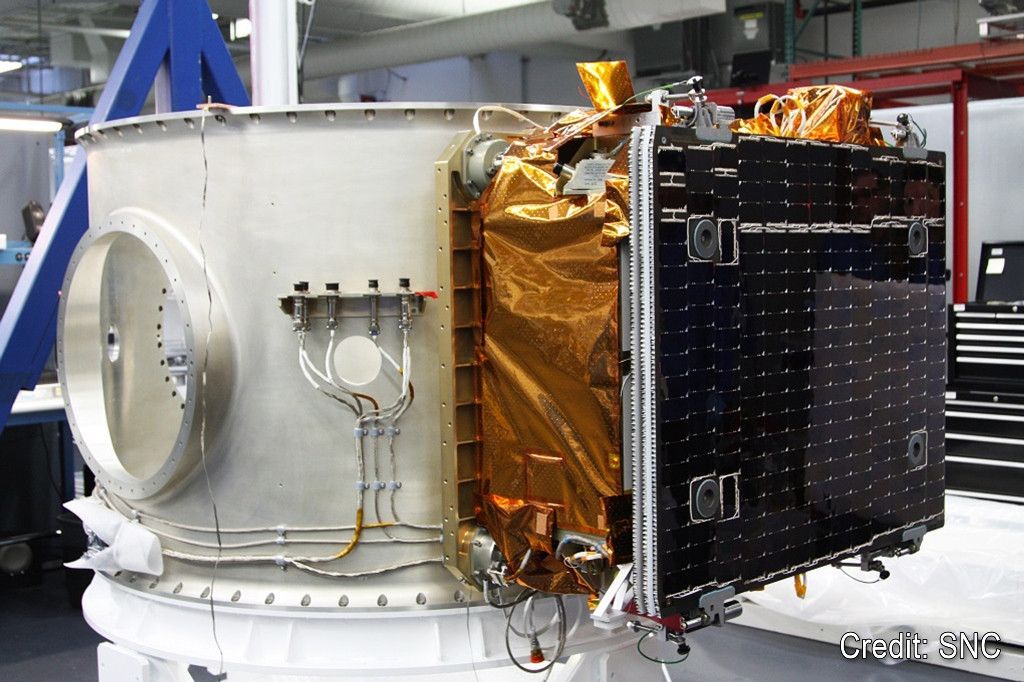 Launch vehicle operators (or at least the major ones) all seem to drop their fairings such that the heat produced by the remaining atmosphere remains below 1135 W/m$^2$. Not all the operators provide details on how heat is calculated, but those that do say that the heat flux is calculated using a free molecular flow through a plane perpendicular to the direction of travel, so I suspect that this is more or less a standard definition.

The nominal time for jettisoning the fairing is determined in order not to exceed a maximum instantaneous flux of 1135 W/m$^2$. This flux is calculated as a free molecular flow acting on a plane surface perpendicular to the velocity direction ($\frac{1}{2}\rho V^3$).

The payload fairing will nominally be deployed when free molecular aero-thermal heating is less than 1,135 W/m$^2$.

The nominal time for jettisoning the fairing is determined in order to not exceed the aerothermal flux of 1135 W/m$^2$. This flux is calculated as a free molecular flow acting on a plane surface perpendicular to the velocity direction, and based on the atmospheric model US66, latitude 15° North.

Unless otherwise requested, fairing jettison for Delta IV missions will occur shortly after the 3-sigma high theoretical free molecular heating for a flat plate normal to the free stream drops below 1135 W/m$^2$ (360 Btu/hr ft$^2$) based on the 1962 United States Standard Atmosphere.

Unless otherwise requested, fairing jettison will occur shortly after the theoretical free molecular heating for a flat plate normal to the free stream drops below 0.1 Btu/ft$^2$-sec (1135 W/m$^2$) based on the 1962 U.S. standard atmosphere.

The nominal time for jettisoning the Fairing is determined in order to not exceed the aerothermal flux of 1135 W/m$^2$. This flux is calculated as a free molecular flow acting on a plane surface perpendicular to the velocity direction and based on the atmospheric model US 66, latitude 15° North. After Fairing jettisoning, the aerothermal flux varies from 1135 W/m$^2$ to less than 200 W/m$^2$ within 20 seconds.

The PLF [payload fairing] is jettisoned at approximately 340 to 350 seconds into flight (at an altitude of 121 to 125km or more), and the maximum FMHF [free molecular heat flux] does not exceed 1135 W/m$^2$ at any time following PLF jettison.

Not the answer you're looking for? Browse other questions tagged spacex fairings or ask your own question.

17
Reusable spacecraft: why still have fairings detach, instead of open/close?
28
What makes 21st century fairings so valuable that they'd potentially be recovered and re-used?
20
What are the two bright objects separating from the Falcon 9?
11
Where can I find data for Atmospheric density vs. altitude?
15
How many people have returned to Earth in a different type of vehicle than the one that launched them into space?
8
Why did this fairing separation happen at such a high altitude? (SpaceX Iridium-6/GRACE-FO)
6
Why are 22N and 440N liquid engines quite common?
6
Do each of the fairing halves now use thrusters post-deployment? How does that work?
7
How to determine $\Delta v$ loss due to gravitational pull from earth
7
What was the object seen from the stage 2 camera of the CRS-10 launch at T+3:12
See more linked questions

28
What makes 21st century fairings so valuable that they'd potentially be recovered and re-used?
6
Is this fairing covered in thick thermal insulation? Keeping the payload warm? Or Cold?
7
How does SpaceX decide which half of the Falcon 9 fairing to catch?
4
How is payload fairing designed?
5
Could a fairing vacuum protect the payload from acoustic loads?