In the earlier, pre-New Horizons Pluto flyby question How long have we known Pluto is red? about the general, slightly reddish tinge of Pluto, the answer is "tholins".

Now that New Horizons flyby is over and all of the data has been transmitted to Earth, there are color, high resolution images of Pluto with substantial variation of color across the surface.

Why does pluto have a variations of colors? In other word, Do we know each substance that produces each color?

below: PIA19957: 'Snakeskin' Terrain: "In this extended color image of Pluto taken by NASA's New Horizons spacecraft, rounded and bizarrely textured mountains, informally named the Tartarus Dorsa, rise up along Pluto's day-night terminator and show intricate but puzzling patterns of blue-gray ridges and reddish material in between. This view, roughly 330 miles (530 kilometers) across, combines blue, red and infrared images taken by the Ralph/Multispectral Visual Imaging Camera (MVIC) on July 14, 2015, and resolves details and colors on scales as small as 0.8 miles (1.3 kilometers)." 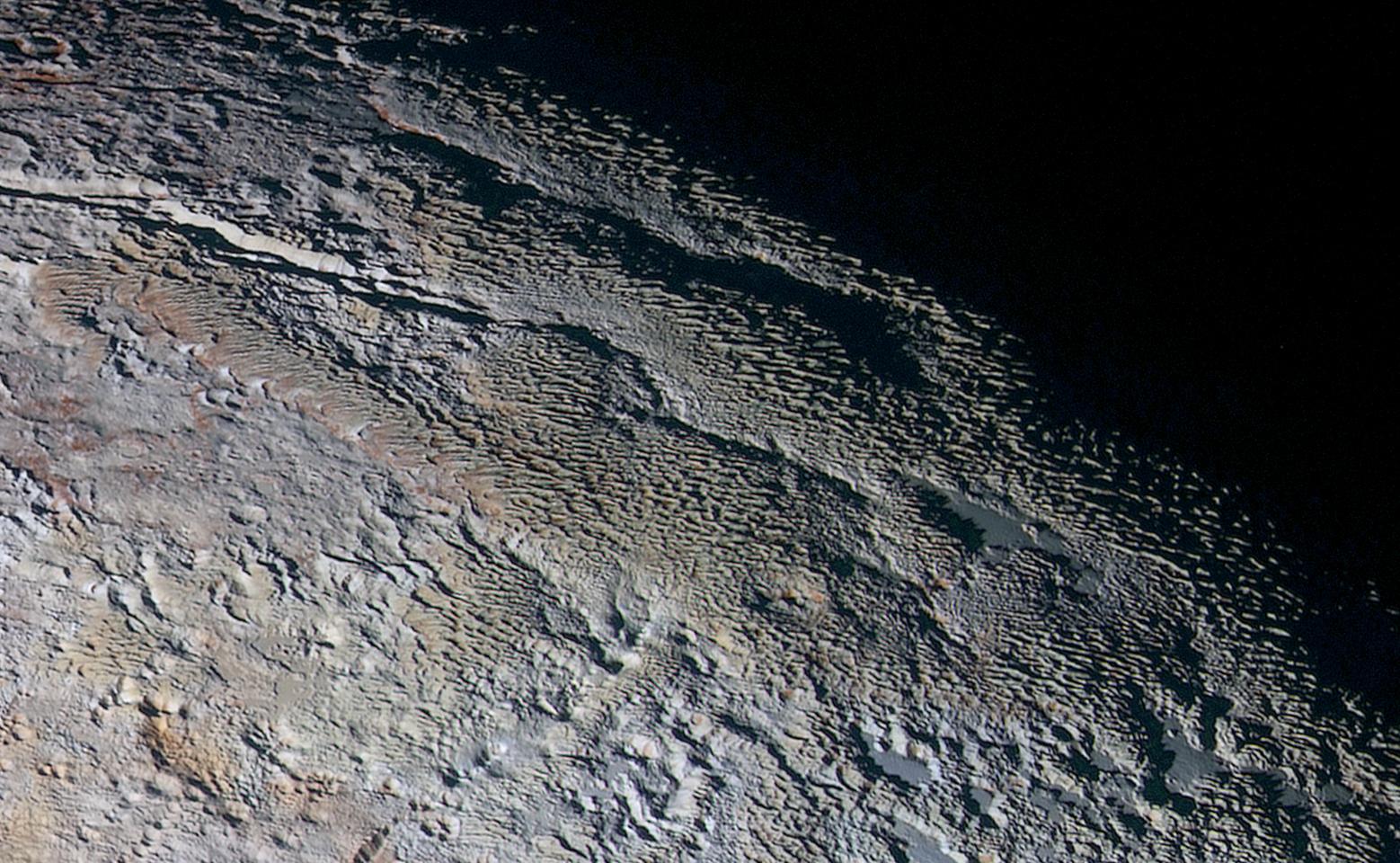 “We used MVIC’s infrared channel to extend our spectral view of Pluto,” said John Spencer, a GGI deputy lead from Southwest Research Institute (SwRI) in Boulder, Colorado. “Pluto’s surface colors were enhanced in this view to reveal subtle details in a rainbow of pale blues, yellows, oranges, and deep reds. Many landforms have their own distinct colors, telling a wonderfully complex geological and climatological story that we have only just begun to decode.” 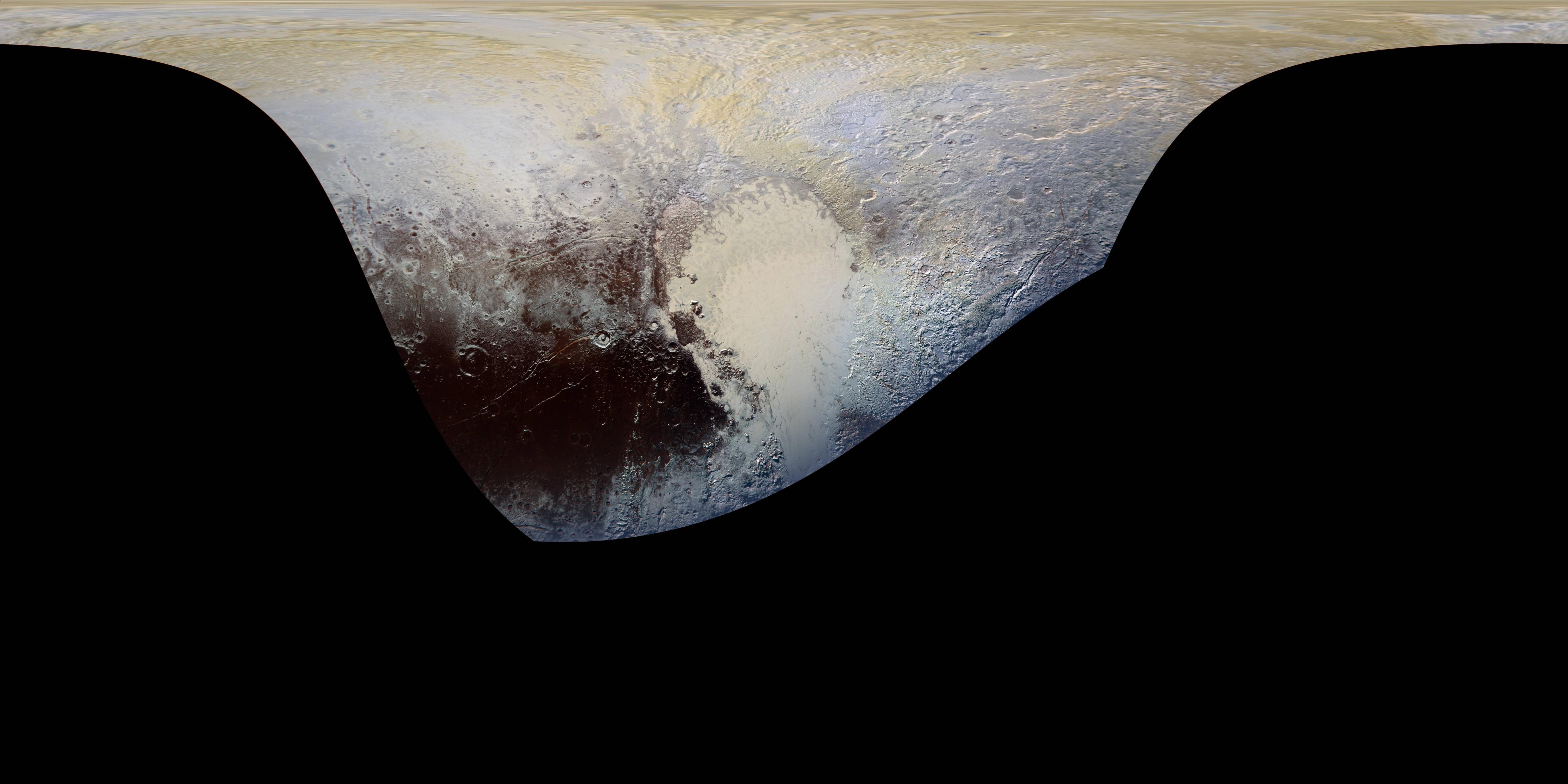 One type of compound that can cause the reddish coloration is tholins, described in Wikipedia. An abstract of a study of these tholins on Pluto has been published by Harvard University. Tholins are formed when solar radiation and energetic particles go to work on simple molecules like methane ($\text{CH}_4$), nitrogen ($\text{N}_2$), carbon monoxide ($\text{CO}$) and water ($\text{H}_2\text{O}$), breaking up the molecules into fragments that then form more complex, polymeric products.

The reddish colors in tholins come from light absorption. In simple organic molecules the valence electrons typically absorb ultraviolet light leaving the compound white or colorless to the eye. But polymerization often leads to a delocalization of some of the electrons, which broadens the range of wavelengths where the light is absorbed. When the absorption crosses over from ultraviolet light to shorter wavelengths of visible light, long wavelengths remain absorbed less and therefore reddish hues are the ones that survive. As quoted from the University of Massachusetts at Amherst:

Pluto is far from the only world to have these tholins. The referenced Wikipedia article above cites numerous examples, among them the orange atmospheric haze on Titan and the reddish stuff on the surface of Europa.

In the second picture posted, note they say "enhanced" colors. These are not the true colors - they are stretched colors, with image processing, to show more subtle variations from within a smaller range of color. Pluto is mostly yellows and reds, with blue haze.

From another abstract about ices: "The spatial distribution of volatile ices is compared with the distribution of the coloring agent(s) on Pluto's surface. The correlation of ice abundance and the degree of color (ranging from yellow to orange to dark red) is consistent with the presence of tholins, which are refractory organic solids of complex structure and high molecular weight, with colors consistent with those observed on Pluto. Tholins are readily synthesized in the laboratory by energetic processing of mixtures of the ices (N2, CH4, CO) known on Pluto's surface." - Cruikshank et al: http://adsabs.harvard.edu/abs/2015DPS....4710102C

"Laboratory experiments suggest that Pluto's coloration may be due to the presence on the surface of tholin-like materials, which are organic compounds produced through photolysis and radiolysis of native material found on the surface and atmosphere of the dwarf planet. Tholins produced in the laboratory exhibit a wide range of colors" - Protopapa et al: http://adsabs.harvard.edu/abs/2018DPS....5050601P

And one not behind a paywall: Surface compositions across Pluto and Charon: Grundy et al: https://science.sciencemag.org/content/351/6279/aad9189

The other responder noted Titan haze, everything you ever wanted to read about haze on Titan can be found here: https://agupubs.onlinelibrary.wiley.com/doi/full/10.1002/2016JE005240 It talks in much more detail about tholins.

As a side note, most of the authors are from various institutions such as NASA AMES, SETI, SwRI, and U of Arizona, not Harvard. Harvard just provides an abstract listing service for astronomy papers that have been submitted but not published yet, once you post, it's on that site forever. http://adsabs.harvard.edu/

Not the answer you're looking for? Browse other questions tagged pluto or ask your own question.

13
How long have we known Pluto is red?

11
Will Pluto's atmosphere collapse prior to New Horizon's visiting it?
8
Use Pluto's gravitation to reach the next dwarf planet
11
What causes Pluto's atmosphere to recede/collapse?
6
When could we see Pluto's Southern hemisphere?
35
Why is it hard to take a high quality image of far away objects (like Pluto) using a high-tech space telescope?
4
Why is part of this New Horizon's Charon high resolution image missing?
14
Why do the pictures returned from the New Horizons flyby of Pluto lack motion blur?
11
Did New Horizons capture enough of Pluto's surface to create its global map?
1
Do we know what is the approximate size of this object on Pluto's surface?