What is the final conclusion about 'object M'? What happened?

I've looked at Is Iridium launch object M a test satellite? and I don't understand what seems to have happened.

The Iridium launch produced 11 orbiting objects when only 10 Iridium satellites were launched. There was speculation that S2 had failed to de-orbit into the South Pacific as planned.

However looking at object M it has now changed orbit to an inclination of 89.9 degrees with an apogee of 868 km and perigee of 739 km. This is not an Iridium orbit so is this in fact a test satellite for the SpaceX constellation?

If so it would have been launched from inside the payload adapter after the Iridium satellites had been deployed.

...is the organization responsible for performing all of the orbit determination activity necessary to maintain the US space catalogue.

During announced space launches and satellite deployment (and of course unannounced ones as well!) various space monitoring technologies including ground based radar and optical telescopes make a series of observations of space objects for the purposes of orbit determination. At some point if an object crosses some threshold of potential to be a new object, it is assigned a NORAD Catalog Number. If an observed object is later determined to be a known object, the identity assigned to the catalog number is updated. Thus one object can easily appear under more than one catalog number.

International designators are applied to identifiable components of a space launch or a space mission. The naming is getting more complex as components attach and leave the international space station, or are shuttled there then deployed to space at a later time (e.g. cubesats getting tossed out of an airlock).

I've been in email contact with Dr T.S. Kelso, who runs Celestrak.com. The first thing he did is got the orbital information from Iridium and matched them up, so the Celestrak database now has the satellites named. He has changed Object M to Object L in his database, as he can see no reason, other than an input error, for the letter L to be missed. If it was left for the stage, then there would have also been a spare. Catalog ID as well. (emphasis added)

Today I've done a search on the celestrak website: https://www.celestrak.com/satcat/search.asp and by playing around with the search input, including the text in the un-selected data field, I could get the chunk of catalog numbers that included the ROI. You can see that number 41927 has been identified, and there are mysteriously un-named catalog numbers immediately following. 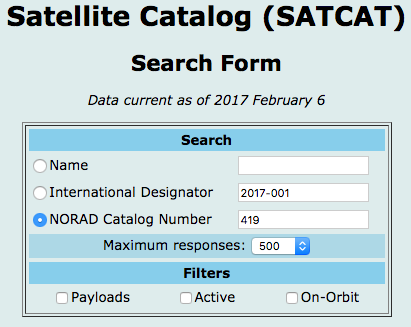 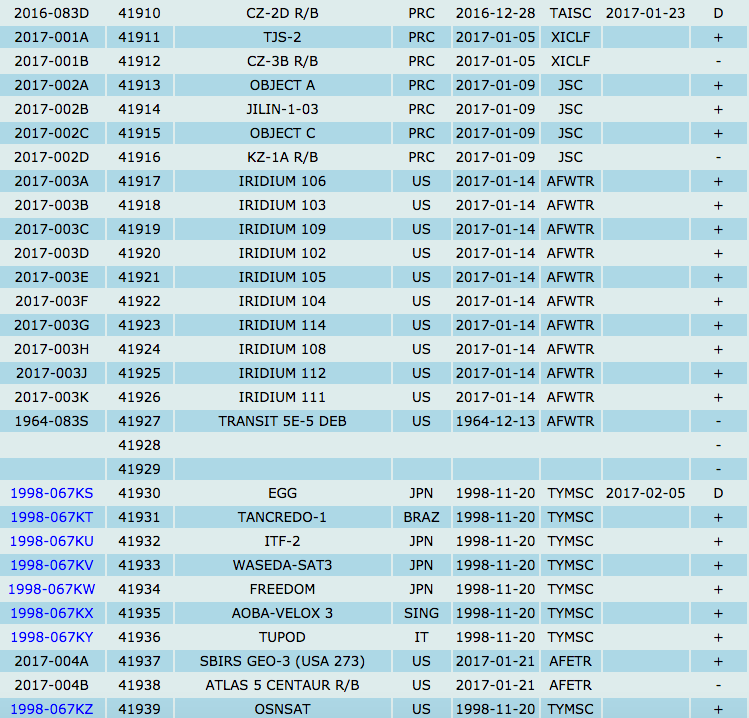 JSpOC's orbit determination and object identification is a long way from perfect, and particularly suffers when several objects are released into similar orbits, hence the temporary misidentification of an extra object associated with the launch. There was no such object. The 2nd stage reentry was normal.

Not the answer you're looking for? Browse other questions tagged spacex artificial-satellite low-earth-orbit payload-deployment iridium or ask your own question.

5
How were the 10 Iridium NEXT satellites deployed by SpaceX?
8
What goes into the planning and execution of the deployment of groups of LEO satellites?
5
What goes into an Iridium Flare prediction model besides the ephemerides?
5
How exactly are satellites drifted to slots in different orbital planes?
5
How do multiple satellites deployed in the same launch reach their different final orbits?
5
Efficiency and timing of the Iridium-6/GRACE-FO low-power burn and coast phase?
5
Why were Europe's first few satellites so stylish? Why the pronounced alternating white and black stripes?
3
Why do orbits in the Iridium constellation have an inclination of 86.4°?
3
Are Starlink satellites flaring?