Why don't Ion thrusters use exothermic reactions directly to ionize the gas and Heat up the Plasma?

Ion thrusters require a lot of energy because of their high exhaust velocities. But why can't they just pump a mixture of hydrogen and xenon into the chamber, mix it with oxygen and burn it? Doesn't this ionize the gas and also provide enough thermal heat to push the plasma through the grids?

Maybe not hydrogen and oxygen, but some other exothermic reaction. Not to completely avoid electricity input but reduce it. Maybe reducing the size of the solar panels. I am talking about deep space missions.

This would also be much more efficient than energy production through turbines, wouldn't it?

Is there any drawback of using exothermic reactions?

To be usefully efficient, an ion engine needs to ionize a substantial fraction of the propellant, and keep it ionized until it passes through most of the positive electrostatic potential gradient to whatever potential the local free space is assigned. I won't say "ground" here, but the assignment of zero is arbitrary.

It's the electrostatic acceleration of the ions that is the "push" of the engine.

That means the plasma needs to be low enough pressure so that the ions and electrons don't recombine too much. In some designs using electron cyclotron resonance, the vacuum must be so low that the electrons can accelerate to high energy before a useful, ionizing collision. That low pressure is way too low to allow a sustained chemical reaction.

Stuff doesn't burn in a near-vacuum

An ion engine's biggest job is to keep generating high energy electrons to continue to ionize the neutral gas constantly introduced into the chamber. There are then so few collisions that the reaction of one oxygen/hydrogen atom pair wouldn't trigger any nearby atoms to undergo a similar reaction. It wouldn't be self-sustaining, and in fact almost all the hydrogen and oxygen would pass out of the engine unreacted. 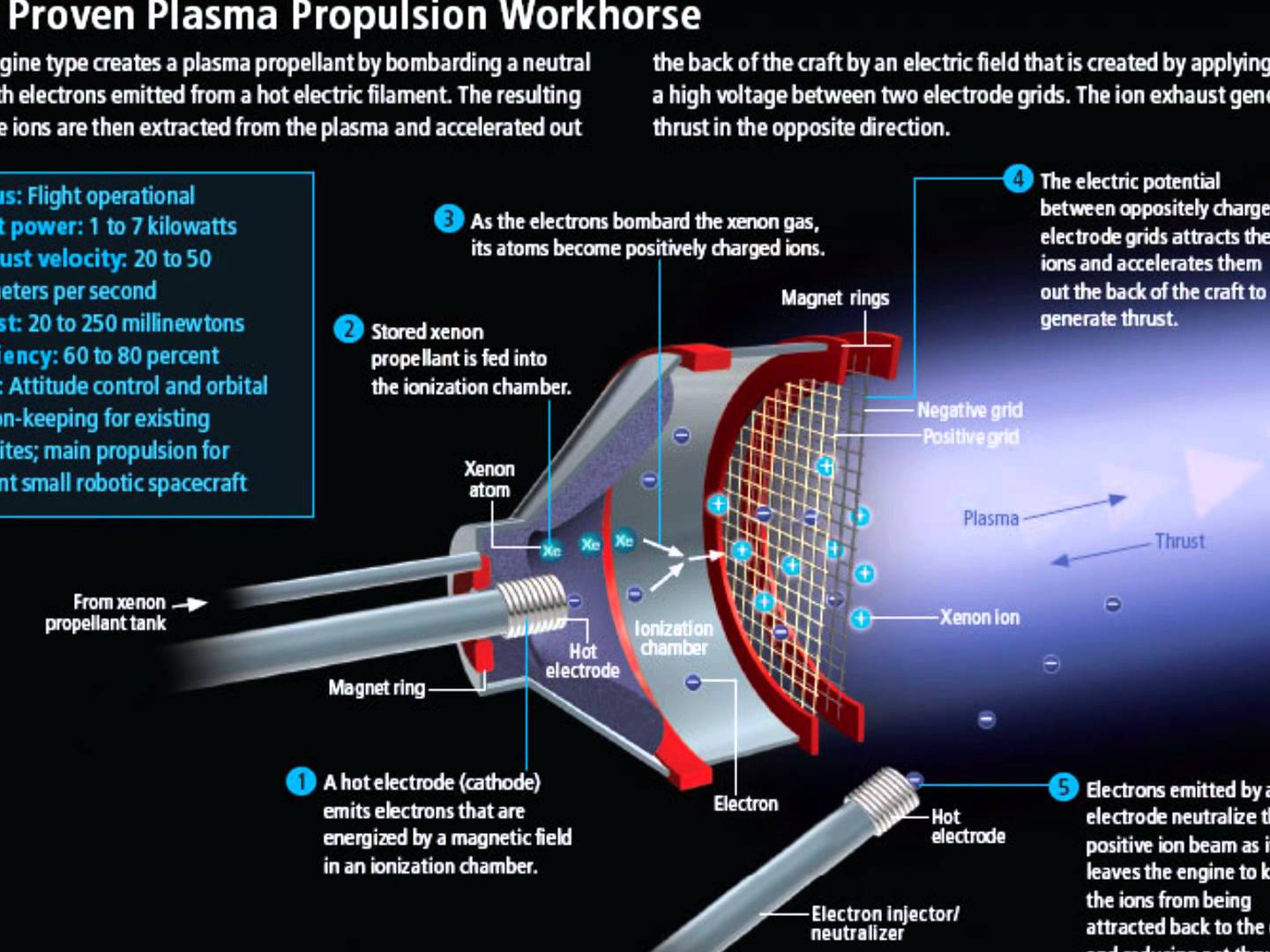 above: from this YouTube Video Introduction to Ion Thrusters. Right-click and open in a new view for full size readability and detail. Image is placed here to avoid link rot if the YouTube video is ever moved or deleted.

Here is a link to the actual video:

Because what you are just describing is regular liquid fuelled rocket.

The efficiency of a rocket fuel is dictated by it's exhaust velocity. This velocity has a maximum value for each kind of fuel.

Moreover, we cannot store liquid hydrogen/oxygen for a long time. For a deep space mission, this is an issue.

The ion thruster should be as simple as possible and it should use the propellant mass effectively. Why use three gases if using xenon only works? The propellant mass should be accelerated totally, not only the xenon part. If you use the full heat of a reaction of hydrogen with oxygen, the combustion chamber must be cooled to prevent melting. An ion thruster is used for long missions due to the low thrust, but liquid hydrogen and oxygen can't be stored that long. High pressure tanks for gaseous hydrogen and oxygen are heavy. Xenon is a very heavy gas, a tank for the same mass of gas could be much smaller and lighter for xenon than for hydrogen or oxygen. The amount of electrical energy used for the heating and ionization of xenon is much smaller than that used for the acceleration of xenon. You don't need additional consumables to heat the xenon, just a part of the solar panels is enough.

Not the answer you're looking for? Browse other questions tagged energy ion-thruster or ask your own question.

21
Why do ion thrusters frequently use xenon as the reaction mass?
3
Using interstellar medium as propellant for ion propulsion
7
Why can't we use charged fine metal dust instead of plasma for ion thruster?
22
Why are Ion Thrusters so energy hungry?
8
Why doesn't the ISS use ion engines to maintain altitude?
5
Why is the thrust to weight ratio of ion thrusters so low?
3
Is the BBC's explanation of nuclear thermal electric propulsion wrong?