Why is there a large wooden ball on Mariner 3's magnetometer?

Wood is good for certain niche space exploration applications, but the one below is not for spaceflight. According to the documentation for the archived photo:

Several spacecraft were built for the Mariner Mars 1964 mission. The ones that were actually launched were referred to as Mariner C-2 and Mariner C-3 until they were renamed Mariner 3 and Mariner 4, respectively. There was also a Proof Test Model (PTM, or Mariner C-1) and a Structural Test Model (STM). This photo shows Mariner C-2 configured for system tests in May 1964. It appears to be in the Spacecraft Assembly Facility, with the observation area at the top of the photo.

Documentation found in the Archives does not identify the purpose of the sphere covering the magnetometer during this test.

I can speculate - non magnetic materials near magnetometers, but a plexiglass or fiberglass box could have been used, both of those were already around at the time. For that matter, what about aluminum?

This wooden shell looks so heavy (it's not Balsa this time)! 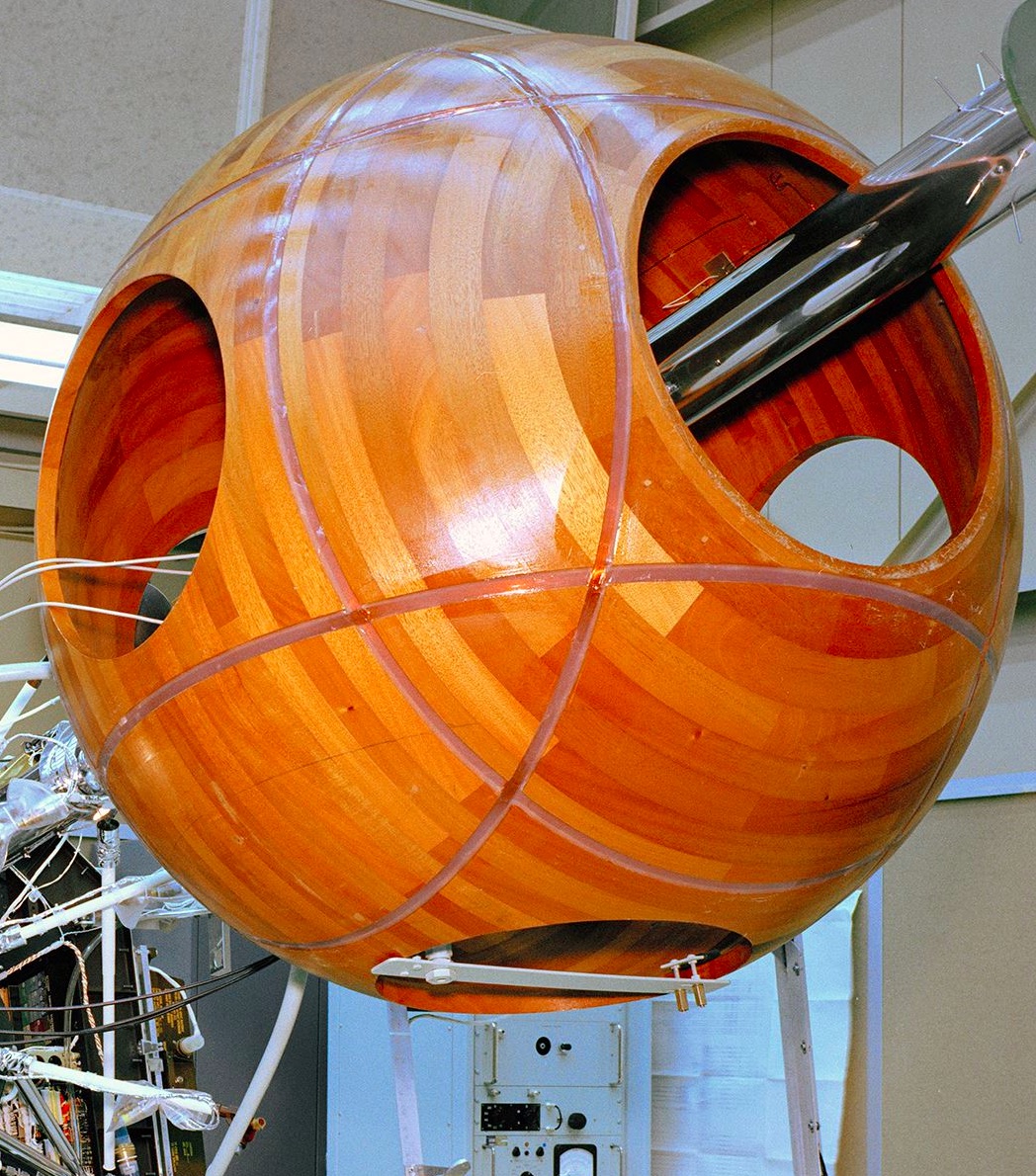 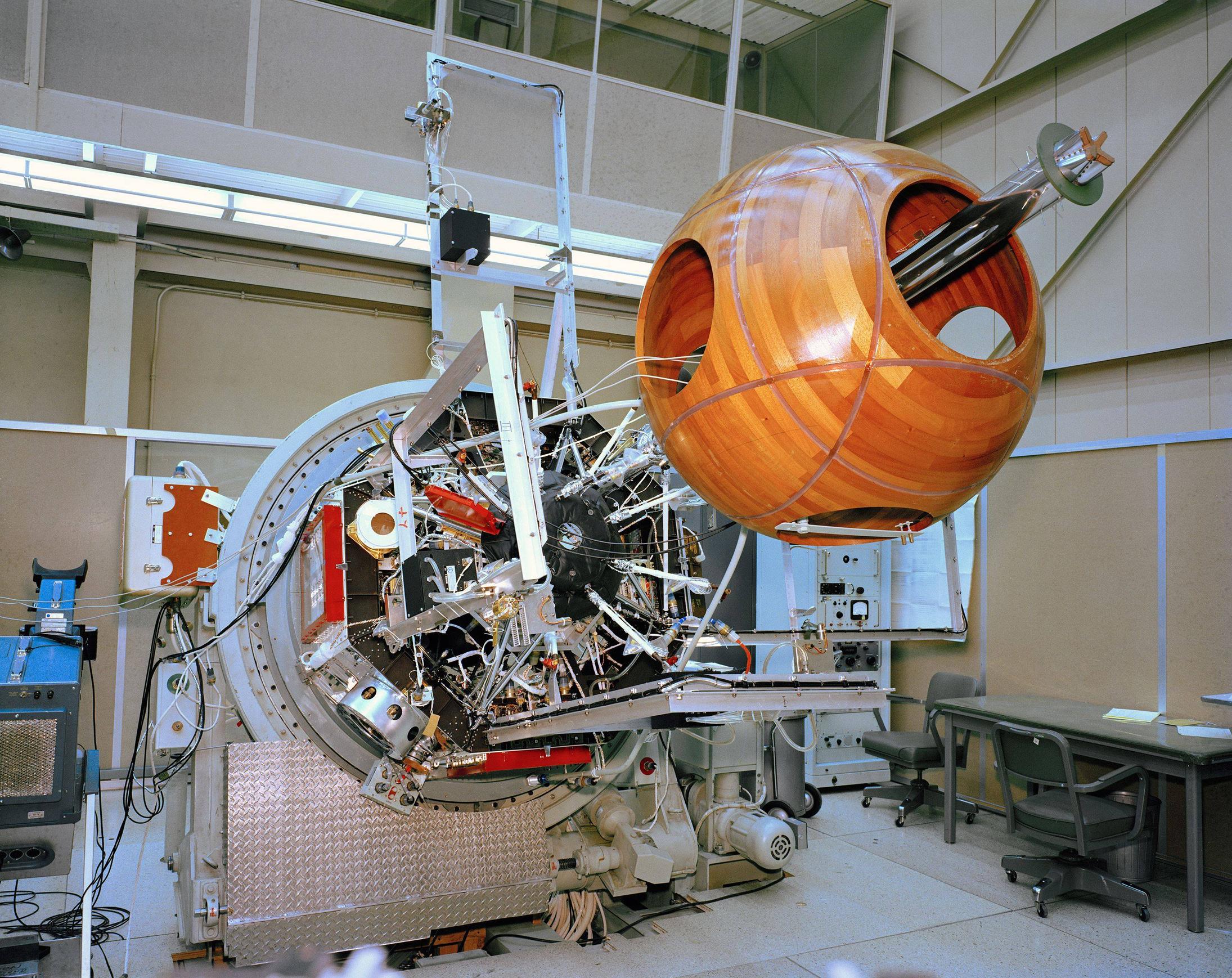 I suspect the wooden sphere is a three-dimensional Helmholtz coil. A Helmholtz coil is a pair of circular coils, the radius of the coils should be equal to the distance of them. There is a coil pair for each of the three dimensions. Each coil should have the same number of windings.

There are circular groves visible filled with silicone or something similar. The groves contain the Helmholtz coils, one pair for each direction. An electrical current flowing through the coils generates the magnetic field. The Helmholtz pair of coils minimizes the nonuniformity of the field at the center of the coils. It is used as a magnetic field simulator for the magnetometer to do tests on Earth. 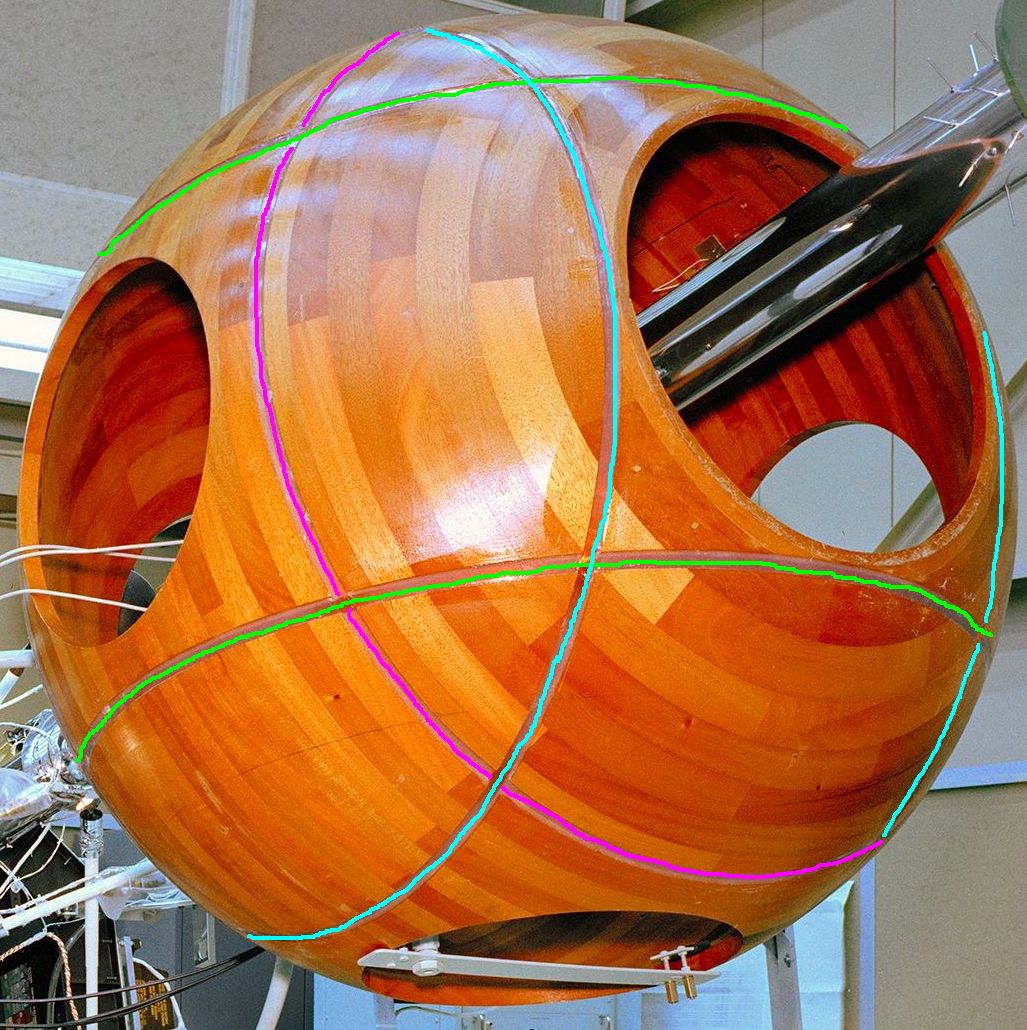 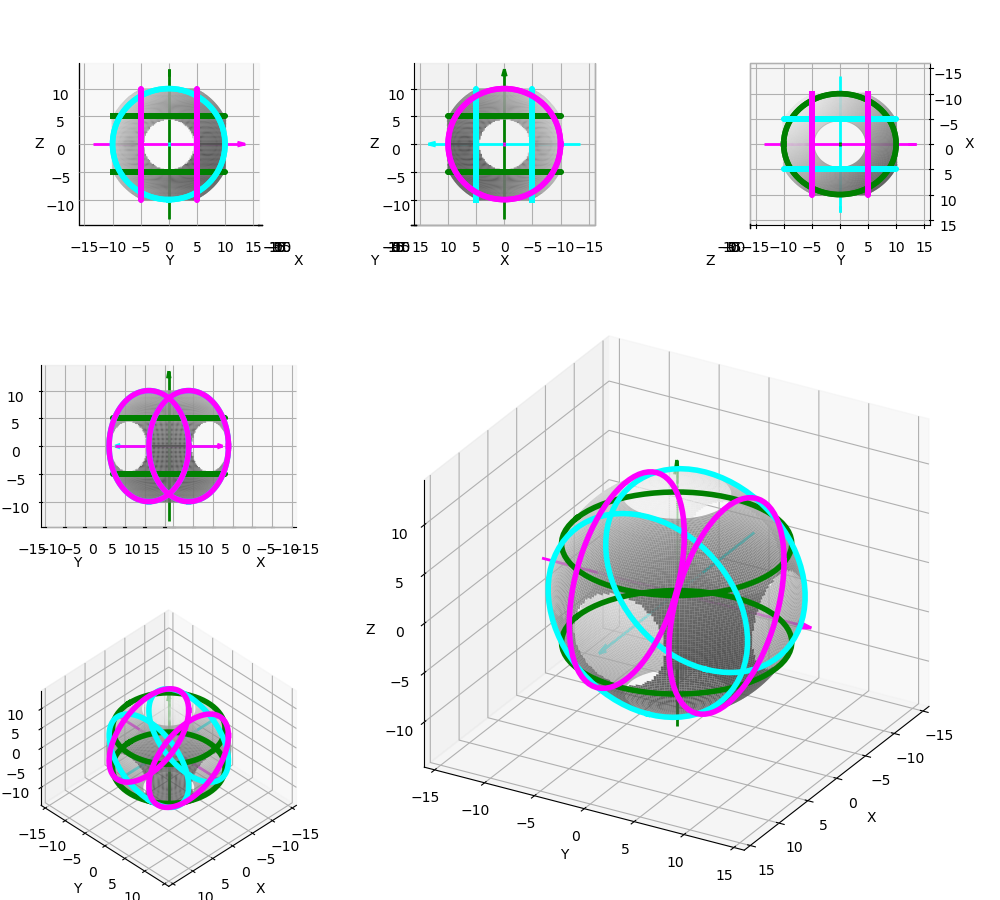 *I used Python with Matplotlib for a plot of the coil configuration. All coil radii and all pair distances are equal. The green arrow shows the direction of the magnetic field caused by the green coils, the same is true for the colors magenta and cyan.

The sphere is symmetric in all three dimensions. The upper row of plots are the views vertical to each coil pair. Hidden lines are not removed.*

This configuration of Helmholtz coils may be used to compensate the local earth magnetic field and to generate a magnetic field of variable direction and intensity for a thorough test of the magnetometer to measure sensitivity and linearity in all three dimensions.

The sphere is made from wood to avoid any metal and unwanted magnetic fields. Wood does not conduct electrical currents, eddy currents are not possible. It is used for preflight tests only, the weight is no problem. If they used plexiglass or fiberglass for that, they would need a model made from wood to shape the fiberglass. It was easier to use the wood sphere itself as only one piece was necessary. They did not use aluminium because any metal should be avoided. The manufacture of the sphere was easier using wood than aluminium and the better stability of aluminium was not needed there. Using thick and heavy wood provided the necessary stability of the sphere to avoid any deformation during the tests and also during the manufacture of the sphere.

The Python code to draw the three axes Helmholtz coils. Run the code to turn the coils arrangement manually and look to it from all sides.

To add to Uwe's answer –

I just ran across the wooden sphere (either Mariner 3 or 4) in in historical footage! 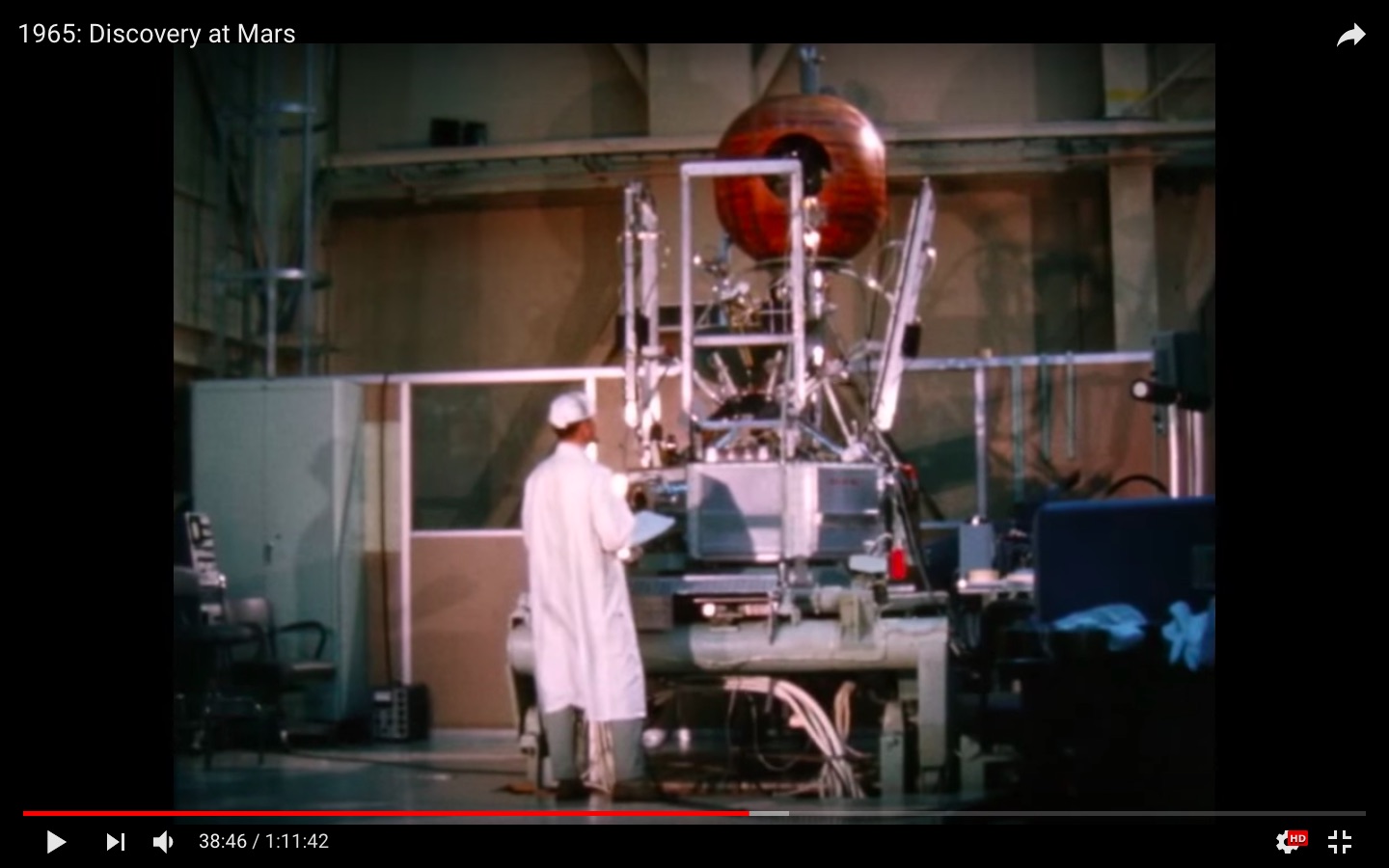 I just ran across another example of a triplet of Helmholtz coils in a video about the MAVEN magnetometers.

The NASA.gov mission page Measuring Mars: The MAVEN Magnetometer links to the YouTube video MAVEN Magnetometer. In it you can see the same geometry as in the other answers here, three pairs of Helmholtz coils. But this time they are large enough to form a large space that you could bring a big section of a spacecraft into and put on a table, rather than the wooden sphere only big enough for a magnetometer housing that would need to be suspended around it.

Note also there is still a wooden bobbin for a single pair of coils in the first image.

You can also see that each of the three pairs has a smaller "satellite pair" at much larger distances; there are a total of twelve coils shown. I've asked a separate question about these: How are these “supplementary” or “satellite” Helmholtz coils used?. 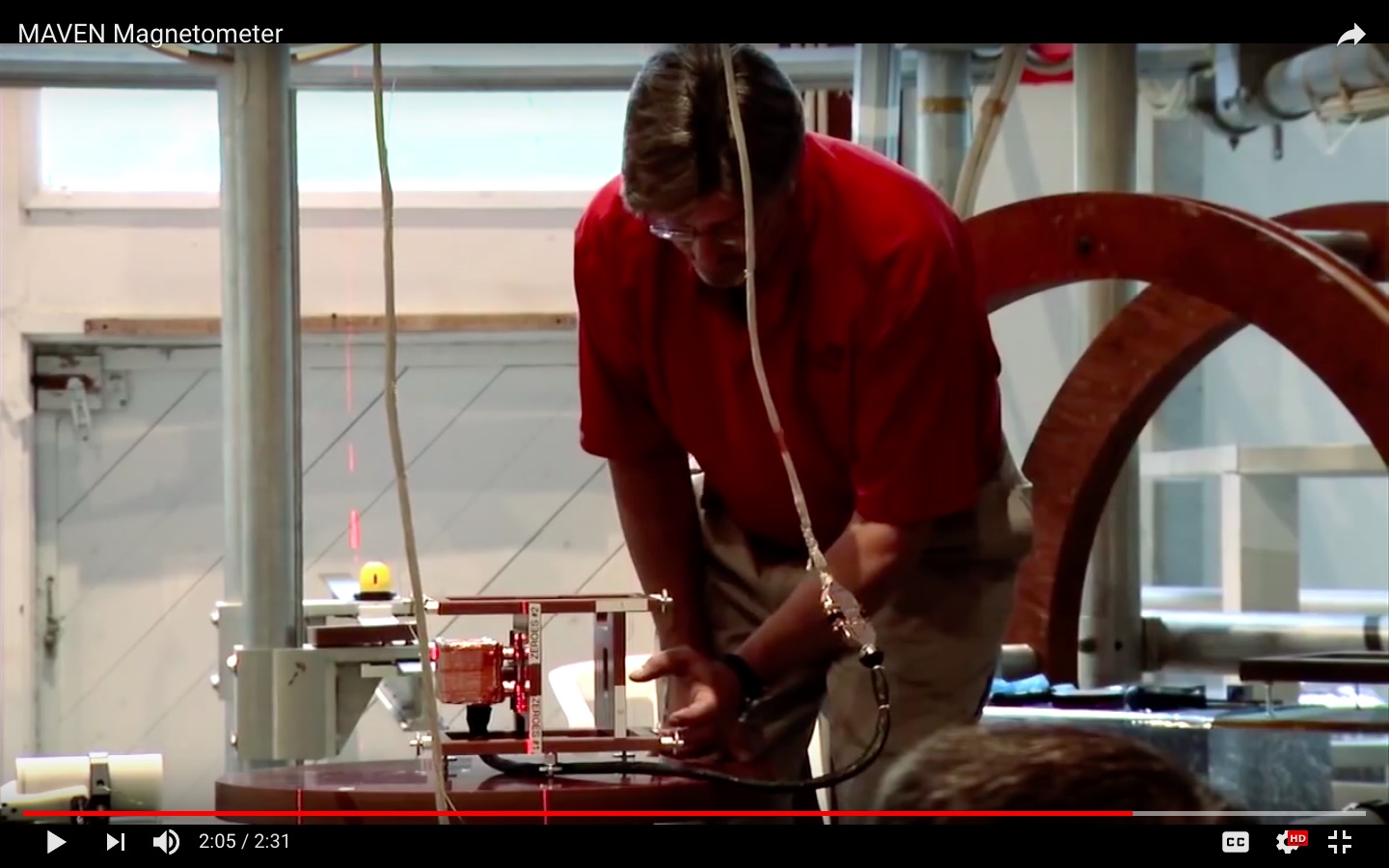 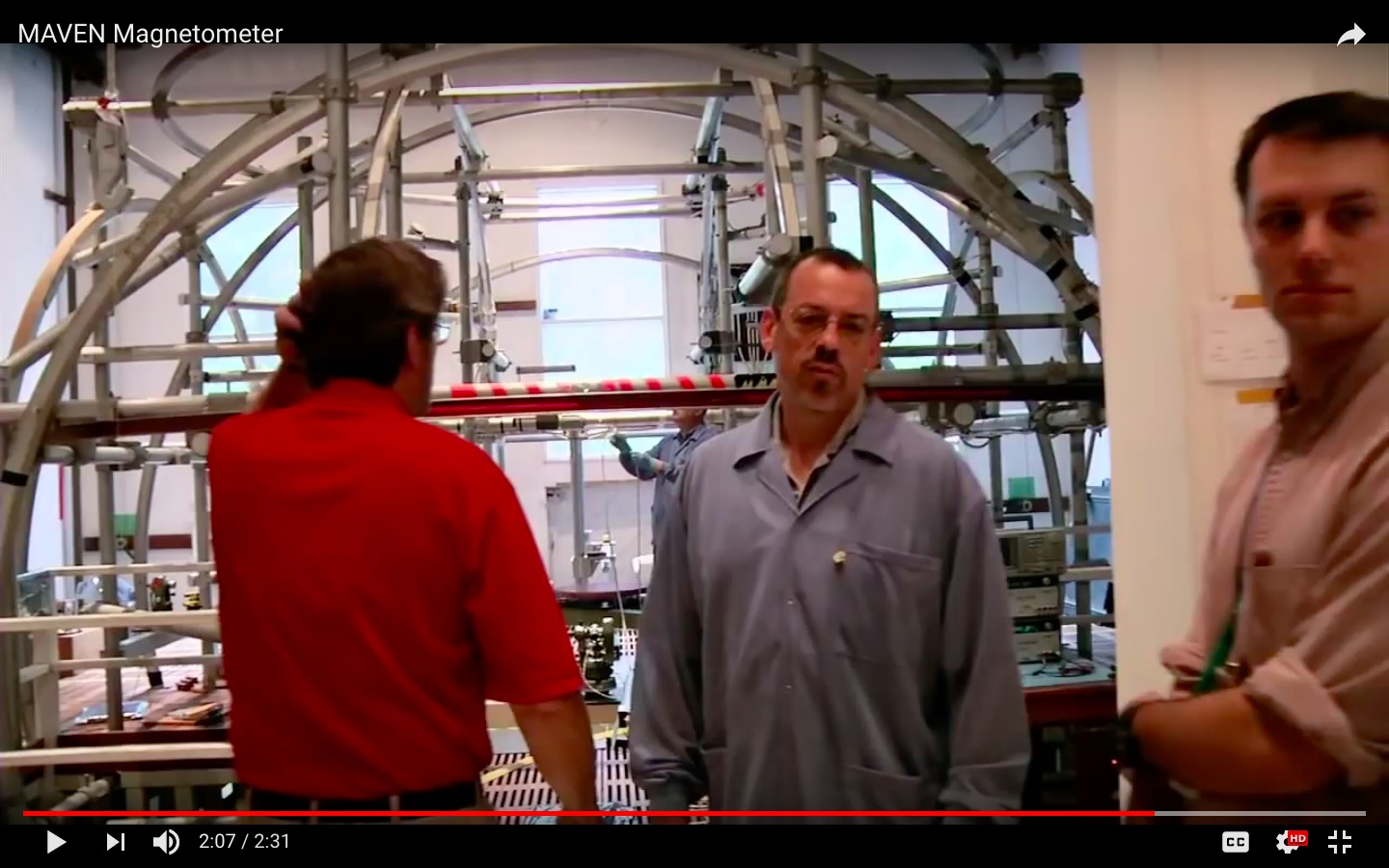 Not the answer you're looking for? Browse other questions tagged spacecraft testing mariner or ask your own question.

26
Puzzler - which spacecraft(s) incorporated real wood structural elements?
19
Use of carbon monoxide as propellant on Mars
0
What was the first piece of wood to reach the far side of the Moon? Or the first spacecraft?

49
Why are there no spacecraft rotating for artificial gravity?
18
Why aren't there any space tugs in use?
5
Why Mariner 10 was instructed to turn off [transmitter]?
33
Why is there any launch window at all for the Falcon Heavy test flight?
9
Why aren't there many audio soundscapes recorded within the spacecraft?
2
Do you recognize these space artists who made this (possibly) first "paint-by-numbers" image of Mars?
7
Are there any large satellite hardware suppliers for components or buses? (For CubeSats, SmallSats, Rovers, etc...)
2
Why wasn't there a 2nd attempt for the Viking-DS (VDS) test payload before the real Viking 1 and 2 were launched?
0
Why are there no Mass Catchers?