How does the efficacy of solar cells on Mars compare with Earth?

Mars gets less than half the light that we get on Earth and there are dust storms, but the atmosphere is much thinner and there are no clouds. After all factors have been considered, how effective are solar cells on Mars (compared with those on Earth)?

Or, in other words (if you prefer a more precisely-defined question), how much harvestable solar power is available (per unit of area) on average on the respective equators of Earth and Mars?

I'm asking in order to understand possible power solutions for hypothetical future colonies. So assume expensive panels with all the bells and whistles like heat regulation, solar tracking (if that's a thing), etc.

Since cloud coverage varies around the Earth, I'd like to get best and worst case scenarios (no clouds and 100% cloudy all the time, respectively) to put the average solar power output potential of Mars into perspective.

You might want to check out solar potential maps. 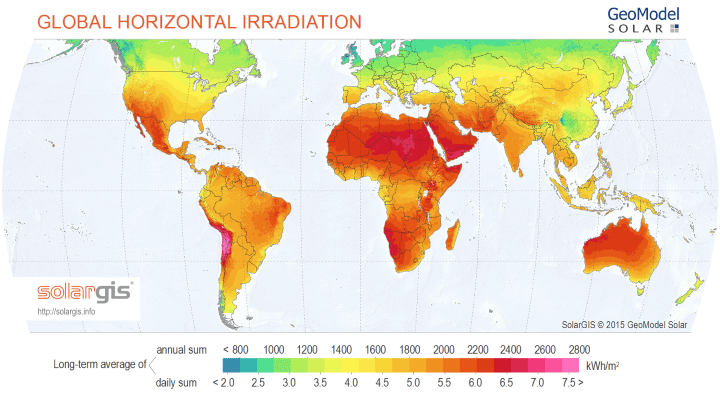 This gives you your "on average" potential power harvested for the Earth, by summing up the daily solar potentials - which builds in accounting for weather, night etc. According to this map, the best areas are near the equator in Chile and slightly north of the equator in Chad/Libya/Sudan, which produce around $2800 kWh/m^2$ per year - roughly $320 W/m^2$.

On Mars, the calculations are slightly more difficult. Mars' irradiance is roughly $590 W/m^2$ - half that of Earth. Mars barely has an atmosphere, however - it's around 0.5% of Earth's so we can essentially ignore atmospheric effects. Temperatures on the Martian equator vary significantly - around $25 ^oC$ at noon, and around $-60 ^oC$ at night (I have no idea how this varies with Mars' orbit, so take that as you wish). Given that the panels won't be operating at night, and Mars has an Earth-ish temperature at day, I don't think temperature is too big of a factor - Mars is colder than Earth, but Solar panels don't mind the cold. NASA is running solar powered rovers on Mars, and they seem to be doing fine, until they got caught in dust storms.

Dust storms are a big problem. According to this research paper from 1993, there is a 1 in 3 chance of a planet-wide dust storm occurring on Mars every year. These last a few weeks - a few months, on average. There are also "smaller" continent sized dust storms which last a few weeks as well. For the sake of argument, lets say that there is a 10% chance that our base is in a dust storm at any given point in time. Martian dust storms vary in intensity - lets say that, on average, 2/3 of sunlight is blocked. Accounting for the day-night cycle, we have a solar potential of $275 W/m^2$ - this seems like an estimate on the high end, and a low end estimate is probably around $200 W/m^2$.

EDIT2: According to folks who did detailed calculations on Reddit, the average value for irradiance is right around 100-120 W/m^2. This figure better accounts for dust storms, variations in orbital distance, Martian tilt, etc. This means that Martian solar panels, at max, would be around 1/3 as efficient as their most efficient counterparts on Earth.

Not the answer you're looking for? Browse other questions tagged mars solar-power earth or ask your own question.

6
Solar panels on Mars?
8
Would it be feasible to use natural light to grow plants on Mars?
4
Solar Flux on Mars Surface
4
Temperature of photovoltaic cells vs efficiency - is it ever actively controlled?