There are two pieces visible in the video.

Are these some sort of fairing or abalator? 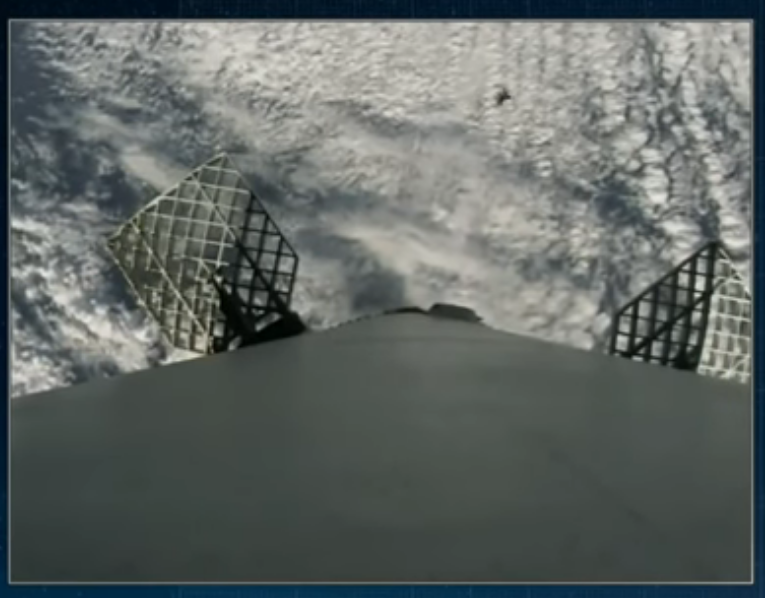 tl;dr: Small, falcon-shaped debris fell off of the first stage around the time it accelerated upward upon engine re-start. With a much higher drag to weight ratio, they started losing vertical speed more quickly than the rocket, which soon passed them by.

In order to get a better look at the objects, I extracted frames from the video and made a GIF. It's displayed at 4 frames per second, compared to 30 fps in the original video. The second object seems to have a particularly bird-like shape, and remains visible for over one second. 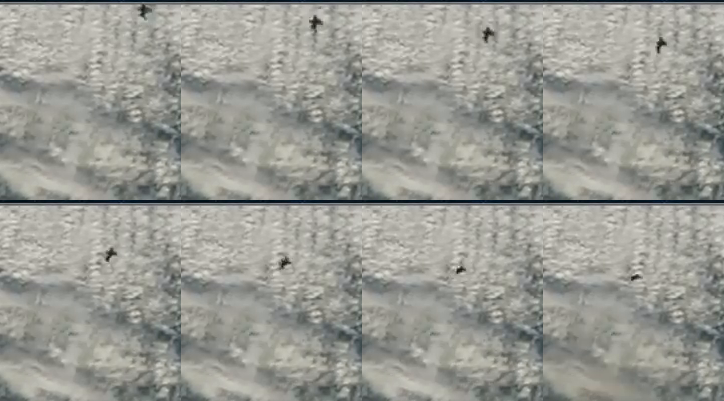 I turned to Flightclub to get an idea of the altitude and speed of the CRS-10 Falcon 9 first stage returning for landing. This site is a user-friendly, physics-based simulator, and has a 'library' of missions with careful, best-effort trajectory reconstructions, based on telemetry in the videos, known physical properties of rockets (e.g. mass, ranges of thrust) and simulated aerodynamics.

The arrow indicates the estimated location of the start of the entry burn. The separation between the launch pad and landing site is 15 km, so it's already clear this is happening at very high altitude, of order 50km. In fact the nubmer is about 46km as discussed below, and with a scale height of 8.5km that means the atmospheric pressure here was below 5 millibar, or less than half of one percent of a standard atmosphere. This means that at least live birds can be ruled out. 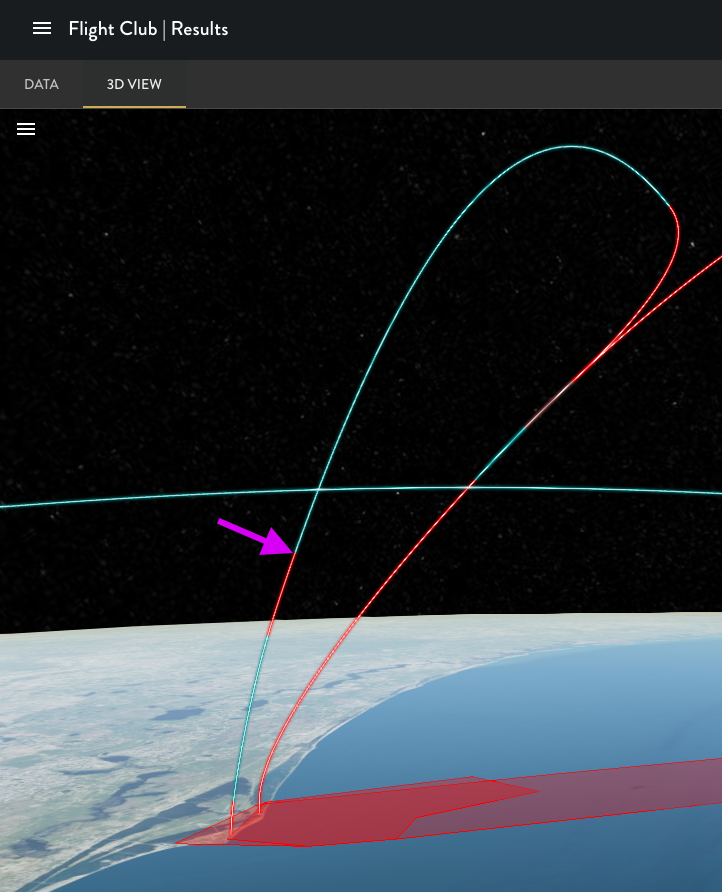 Here are some more detailed plots. I have labeled the beginning of the entry burn (about T+ of 396 seconds) with an arrow. With a vertical velocity of about 1.2 kilometers per second, the objects would have to be much larger than bird to be visible for 1.5 seconds.

What's shooting the bird theory down is the reasonable assumption that at least a live bird would have essentially zero vertical velocity, compared to that of the rocket. It's that vertical velocity, combined with the 1.5 seconds visibility that would make the bird ridiculously large. (And dying because there's almost no air.)

However, if you give the objects a vertical velocity that's nearly matching the first stage, then they could be quite small. In fact, they could be small bits of debris from the rocket that are dislodged by the sudden acceleration due to the engine starting, but they could have fallen off slightly earlier as well.

If so, then why would they come floating back up? Drag. The rocket is aligned roughly along the direction of relative motion with respect to the air, and it's very heavy. The objects are randomly shaped, have no attitude control, and probably have a much lower mass per unit area. Even at a half-percent of standard pressure, they can start loosing meters second of velocity quickly, and since the atmospheric pressure is doubling about every four seconds, it's going to happen quickly. 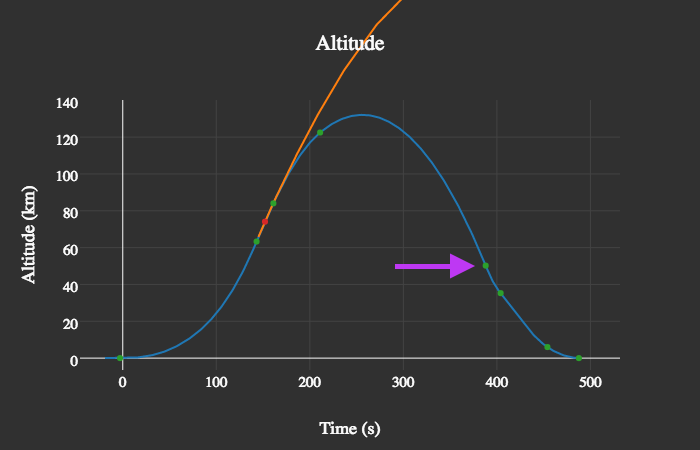 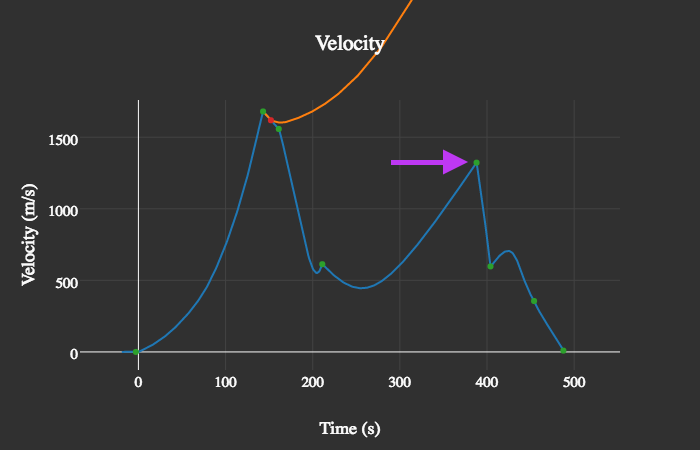 I did find a discussion of bird-shaped debris in the Official Launch Discussion Reddit page for CRS-10. While there is little discussion of the objects' trajectory down, and then up again (relative to the rocket), the conclusion there is where I started when writing this answer.

From: Welcome to the r/SpaceX CRS-10 Official Launch Discussion & Updates Thread! (from r/SpaceX)

sol3tosol4: 1265s - Those are pieces of debris, probably from the bottom of the booster when the entry burn was started (above most of the atmosphere).

Bwa_aptos: So, you're saying that those black items flapping their wings flying through the sky that look EXACTLY like birds flying are "debris"?

sol3tosol4: Yes. At the timestamp of the link you provided, what the booster is falling through is very nearly vacuum. Just after the "birds" go past the booster, the statement "Stage 1 entry burn has started" can be heard (about T+6:30 in the technical webcast). That's where the booster enters the part of the atmosphere that's thick enough to start being a hazard to the booster, several times as high as the highest bird that's ever been seen flying. The booster is also falling at multiple times the speed of sound, and the "birds" are also falling at multiple times the speed of sound, just not quite as fast as the booster. Finally, if you play the video in slow motion (e.g. 1/4 speed), it can be seen that the "big bird" is tumbling, not flapping.

Several people have done flight profiles of reentering boosters, including RTLS - I don't happen to have one handy right now.

Edit: According to [these calculations for CRS-10][21] (see "Booster Phasespace"), the booster was at about 60 km altitude and moving about 1250 m/s (about four times the speed of sound) when it encountered the dark tumbling objects. The greatest altitude a bird was ever encountered at was 11.3 km, and birds don't move at anywhere near Mach 4.

Not the answer you're looking for? Browse other questions tagged falcon-9 or ask your own question.

9
What is the mysterious cube shaped object observed in the Falcon 9 launch?
7
What is the velocity profile of a Falcon 9 first stage landing?
6
What did CRS-11 stage 1 encounter at T+6:02?
5
How to determine rocket launch path for photography?
3
What are some good softwares to simulate rocket trajectories ?
5
What is this ring-shaped part falling from Starship SN9 after launch?
3
How can I find sources for Launch Trajectories?

6
Would it have taken much to steady SpaceX's CRS-6 returning stage so it landed alright?
28
What makes 21st century fairings so valuable that they'd potentially be recovered and re-used?
16
What is this jet of material spraying out from Stage 2 during the SpaceX PAZ mission?
7
What are these circular structures around the rocket?
1
Would having the Falcon fairing reconnect be possible/beneficial?
7
What is the circular item that fell off of the returning booster during the CRS-16 mission?
3
What are the needle pins that go through the pneumatic pushers of the Falcon 9 fairing?