If Juno's long orbit means a lower rate of radiation damage, why the planned short orbit?

The Juno Spacecraft (also Wikipedia, launch 05-Aug-2011, Jupiter orbit insertion 05-Jul-2016) was scheduled for a burn to reduce it's period from about 54 days to 14 days, while maintaining a similarly challenging low altitude periJove of only 4000 km above the planet's equator. Among the technical challenges are the intense radiation near Jupiter due to particles trapped in the planet's strong magnetic field. This lead to some extreme measures, including the 1 cm thick Tantalum Juno Radiation Vault to protect roughy 200 kg of electronic equipment.

It completed it's first periJove on 27-Aug-2016, and on the second periJove it was scheduled to execute the orbit reducing burn on 19-Oct-2016. Due to potential issues with the propulsion system discovered in telemetry prior to the scheduled burn, it was postponed. The burn was not executed during any subsequent burn, and now it seems the decision has been made to leave Juno in the longer orbit for the duration of the mission, according to Space Daily's Juno to remain in current orbit at Jupiter.

Question: What was the purpose of the planned change from 53 days to 14 days? Considering the advantages of staying in the longer orbit, what were the even more compelling advantages of the short orbit?

below: Plot of Juno's originally planned orbit from historical kernels (source and plot described here)in the JPL Horizions database. Juno remains in a single plane but with a reduced apoJove, The in-plane precession of the apses is due to Jupiter's substantial oblateness and large $J_2$. Left: projection into J2000 Ecliptic YZ plane. Right: XZ plane, coincidentally it is edge-on in this view due to mission schedule relative to Jupiter's orbit. 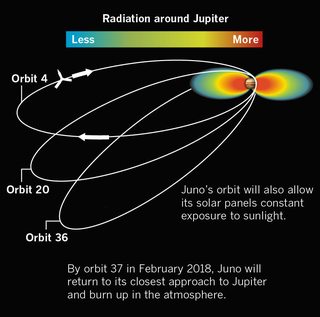 above: sketch of a few of Juno's lower 14-day orbits and illustration of the strongest radiation bands near Jupiter. From the Los Angeles Times

Money. The mission was proposed to a cost cap, which includes operations costs. The science objectives could be achieved with a shorter primary mission and therefore lower cost using tighter orbits.

I can see several reasons for those shorter orbits.

Not the answer you're looking for? Browse other questions tagged radiation mission-design jupiter juno swri or ask your own question.

29
Why is tantalum being used for the Hayabusa bullets?
9
Is the far side of the tidally locked Europa moon safe from Jupiter's radiation?
5
Juno's original orbit around Jupiter - is this apsidal precession? If so, need expression
6
Using Kilopower without shielding
5
How does not orbiting Europa maximize Clippers coverage of Europa for a given radiation dose?
4
JPL Horizons original reference orbit data for Juno - how to retrieve now that it's been updated?
4
Did Juno do a plane change circa October 2019? If so, by how much?
4
Why is it that harmful for astronauts and technology to get too far into Jupiter's magnetosphere? Shouldn't it rather be protective?
3
Has budgetary support for Juno been extended, or is it running out?
2
Why would Juno's originally planned orbit lowering partially mitigate radiation damage?
See more linked questions

12
What is the typical power redundancy built into a spacecraft?
18
Why does NASA's Juno spacecraft only have a one year primary mission?
16
Will Juno record its deorbit?
4
Jupiter's impact on Juno's solar panels
2
Why would Juno's originally planned orbit lowering partially mitigate radiation damage?
5
Juno's original orbit around Jupiter - is this apsidal precession? If so, need expression
3
Better understanding of the "Rivers of metallic hydrogen" in the atmosphere of Jupiter?
2
How, and How Well will Juno measure the effects of frame dragging? (GR effect due to Jupiter's mass & rotation)
5
How does not orbiting Europa maximize Clippers coverage of Europa for a given radiation dose?