Where/how did the CRS-10 Dragon capsule "wait" before the 2nd, successful docking attempt?

After one halted attempt at docking with the ISS, the CRS-10 Dragon capsule successfully completed the maneuver. In the time between the two attempts, Dragon must have maintained some kind of orbit with some relationship to ISS's orbit, to make a time for the next attempt available and yet to remain a safe distance away from the ISS without need of active control.

What orbit did CRS-10 maintain during the wait for the 2nd attempt, and how did it move relative to the ISS during that time?

In the reference frame of the ISS, the course looks approximately like this: 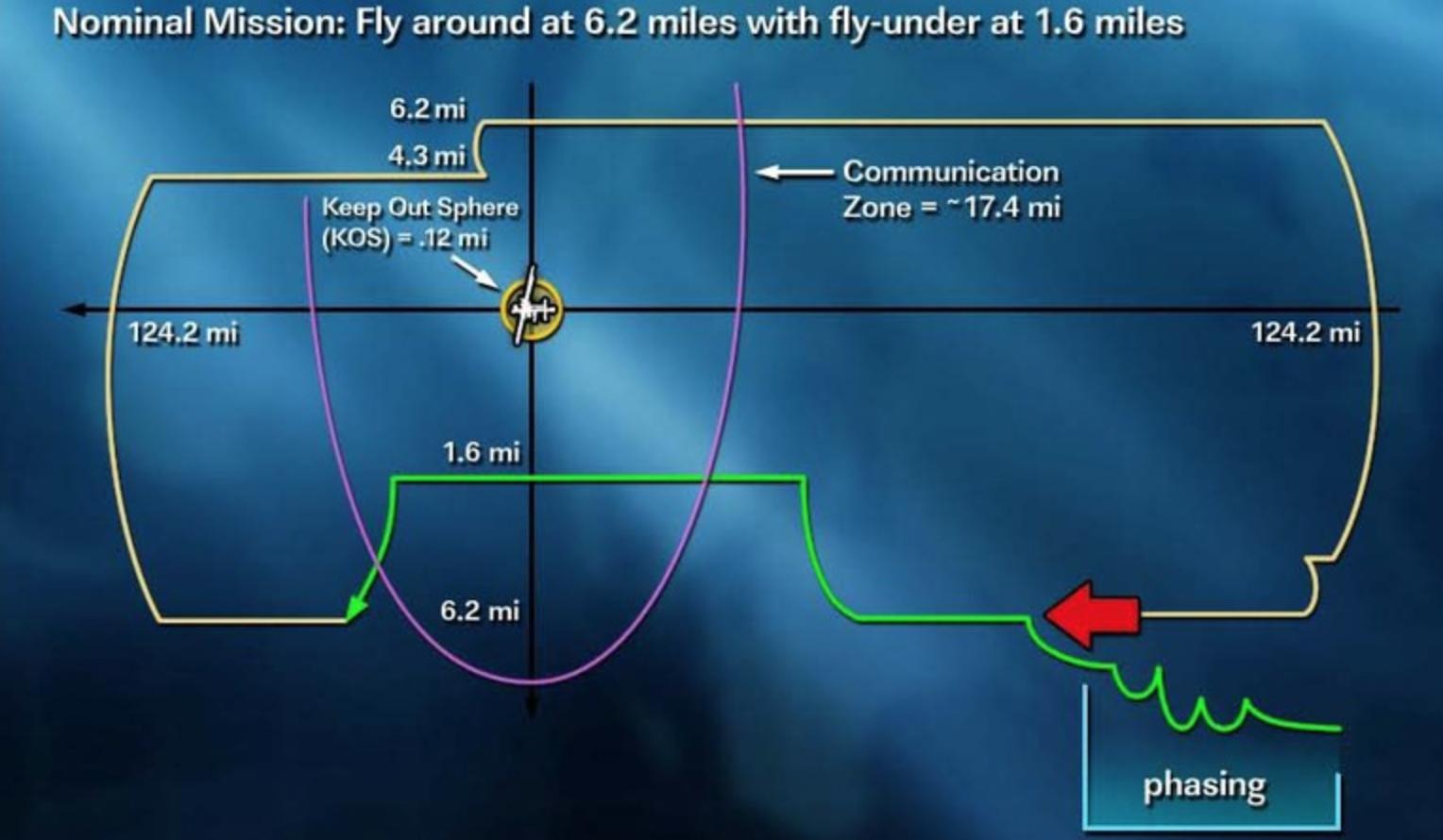 (Note: distances not to scale.)

In an earth-bound reference frame, this is simply a pair of Hohmann transfers between two orbits below and above the ISS:

As the spacecraft was below the ISS, its orbital period was slightly shorter than ISS' orbit, so it eventually came out in a safe distance ahead (and still below) the ISS.

Now being in an orbit above the ISS with an orbital period was slightly longer than ISS' orbit, it eventually came out behind (and still above) the ISS.

Now another pair of burns, this times retrograde, lowered the orbit back below the ISS, still behind but chasing up, ready for another rendezvous attempt.

Note well: I'm using the terms "chaser" and "target" in this answer. These are technical terms with a long heritage (relatively to the space era). The chaser vehicle acts to change its orbit. The target vehicle keeps its orbit.

Tweak it just right and, ignoring atmospheric drag, the chaser will "orbit" the target in an oval centered on but always missing the target. Atmospheric drag is not something to ignore. The vehicles that bring crew and resupplies to the ISS are bullets. In comparison, the ISS is a huge butterfly. Fortunately, the ISS is a cooperative target. (Other targets: Not so much.)

Given that the Internet is chock full of mentions about racetracks but never mentions the details, I gather that those details are not to be released. But the summary description as an oval where the vehicle only turns in one direction thanks to gravitation: that's just Kepler's laws.

Note well: If the DoD had it's druthers, $F=ma$ and $F=GMm/r^2$ would be classified as TS NOFORN, as would be Kepler's laws. That's one of those details.

The answer is "essentially the same orbit". When you're that close to another orbiting object, slight differences in distance from the body being orbited have only a tiny impact on orbital velocity and thus rate of drift away from the rendezvous target.

You enter a lower or higher orbit to catch the object you're trying to rendezvous with, then "approximately the same orbit" when you're preparing for docking.

15
Can cosmic background be harvested for energy?
6
Have guidelines for red & green navigation light placement on spacecraft been established?
3
Spacecraft remaining at station-keeping with respect to the ISS
4
Is 45 km unusually close to pass the ISS and deploy a microsatellite without warning?

17
Did the ISS have to adjust its course when the SpaceX Dragon capsule was detached?
13
Why hasn't Dragon been reused before CRS-11?
1
Minimum spacecraft docking time
10
Could the ISS stop rotating wrt the stars for a few days, then start again?
16
How long can Crew Dragon stay at ISS?
8
What is this diagram shown during Dragon docking with the ISS?
3
Could the Crew Dragon be used to re-boost the ISS?
6
Did the people aboard SpaceX Dragon Crew-1 flight pilot the Dragon or were they just passengers?
6
Dragon as a Lifeboat for Soyuz