Melanized fungi actually seem to thrive in environments with high levels of ionizing radiation (ultraviolet, x and gamma rays), which is usually seen as very dangerous to life.

And then it goes on:

The walls of the damaged nuclear reactor of Chernobyl are covered in melanized fungi and they also are found living very happy on board of the International Space Station. Experiments showed that these melanized species of fungi seem to benefit from radiation, increasing their growth and germination.

Melanized fungi seem to be fungi which can produce a form of melanin, which may be able to derive some biological advantage (energy for synthesis or metabolism perhaps) from light or even radiation.

Have melanized fungi been found happy on the ISS? Is there anything written about this I could read? Any idea if they are gaining some biological advantage from higher radiation levels there? Were they there intentionally (part of an experiment) or did did they travel as common contamination or spores from Earth?

The experiment Growth and Survival of Colored Fungi in Space (CFS-A) - 12.07.16 showed that:

fungi can grow inside the space station and could decompose food and other organic materials in humid conditions. After exposure to air growth stopped, fungal hairs (filaments) developed within the food source and decomposed it by producing digesting enzymes. Submerged filaments don’t make spores, but fungi could still spread through direct contact. Dry spores remained living after 5 months in microgravity, with some fungi living longer than others. The data show that spores would grow well on salted food in space, and some species grow on iron surfaces covered with small quantities of carbohydrates.

One of the species used by the experiment was Ulocladium chartarum, which is a melanized fungi. You can see more on the results of the experiment at the link above. The experiment found that melanized fungi were indeed resistant to cosmic radiation to the degree that radiation was not found to affect their growth, instead microgravity was the main inhibitor. I did not see anything about radiation providing any advantage, but it was at least not an obstacle.

The experiment page also includes a picture of an actual contamination (of what appears to be melanized fungi) on one of the interior panels of the ISS. The caption says that the crew has weekly sessions to clean such surfaces. 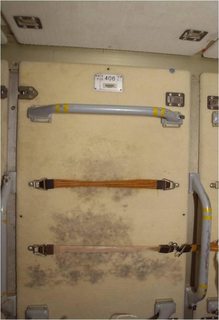 Not the answer you're looking for? Browse other questions tagged iss radiation life astrobiology or ask your own question.

31
Do things get dirty in space?
33
Can you vacuum out the ISS by opening the door?
16
Where should I look in ISS to find mouldy food?
13
When did astronauts/cosmonauts start cleaning and vacuuming space stations?

4
Does orbiting within the outer Van Allen radiation belt increase or reduce environmental radiation levels?
2
What kinds of radiation hit the ISS?
1
Radiation levels around Mars
12
Do ISS astronauts notice, or experience symptoms of elevated CO2 levels? Do they wear monitors regularly?
13
Why not bring life to Venus along with the next exploring mission?
21
Are there free insects in the ISS?
4
How much radiation are astronauts on the ISS exposed to?
2
Can mushroom spores survive the vacuum and radiation of space?
9
Would astronauts on the ISS be affected by the radiation from a global nuclear war?