What useful elements are NOT to be found on Mars?

There are a series of questions on this site which are generally "Is there X on Mars?" "Are there sufficient Y to create Z on Mars?" And the answers are generally YES for the most part.

What is there that we don't expect to be able to find on Mars? I don't mean "we haven't found this yet, but we haven't really looked very hard", I mean more like "given the soil composition we have from Mars, Mars seems to be very poor in X, which is a pity because that means you can't do Y".

So, what is there that we would strictly have to import from off-planet to Mars given what we know currently?

At an elemental level, Mars will contain at least to some degree all of the elements found on Earth, albeit at different proportions.

Mars is primarily igneous. Thus any kind of sedimentary and metamorphose minerals will not be found in any great abundance. Thus marble, slate, quartz, flint, clay, limestone, and others will be rare, if found at all. These could theoretically be manufactured, but aren't really required for most applications.

Just to give you an idea, the most important elements can be seen below, from Wikipedia. Mars has all of these, to some extent. 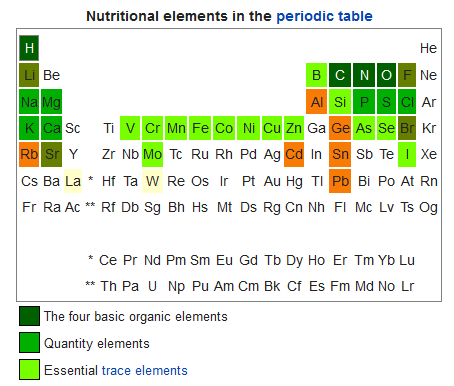 The one thing that I can't find is Helium. Nitrogen also appears much rarer then on Earth, as does most noble gases.

Not the answer you're looking for? Browse other questions tagged mars colonization geology or ask your own question.

25
Would a settlement on Mars need to import Nitrogen?

28
Why not travel to Mars in 2 months?
16
Feasibility: self-sustaining colony on Mars vs. Space Station
8
How useful could lighter-than-air tethered balloons be on Mars for radio and navigation?
6
Any scholarly or serious work in Sports Science for the low surface gravity of Mars or the Moon?
2
What are transonic oscillations (wrist mode) and would Schiaparelli have been transonic at 2 to 4 km altitude?
0
Are there studies on human Mars missions available?