How did Apollo-12 manage to land next to Surveyor-3? First "Space-Tourists"?

To me this looks like the first instance of space-tourism (humor, pls don't add the tag, see exemplary documentation at end of question). The astronauts landed next to Surveyor-3 on purpose, got out of their spacecraft, walked over to it, took pictures of each other next to it, collected a couple of souvenirs (for later study), packed up, got back in their spacecraft, and went home. OK they did do a lot of other things while there as well.

How did they know the location of Surveyor-3 with such precision, using 1960's technology? There was precious little extra fuel on the lander to fly around and look for it, so they must have had a pretty good idea how to navigate there and safely land within walking distance (~200m). How was Surveyor-3's location known to such accuracy?

Charles Conrad Jr., Apollo 12 Commander, examines the unmanned Surveyor III spacecraft during the second extravehicular activity (EVA-2). The Lunar Module (LM) "Intrepid" is in the right background. This picture was taken by astronaut Alan L. Bean, Lunar Module pilot. The "Intrepid" landed on the Moon's Ocean of Storms only 600 feet from Surveyor III. The television camera and several other components were taken from Surveyor III and brought back to earth for scientific analysis. Surveyor III soft-landed on the Moon on April 19, 1967. 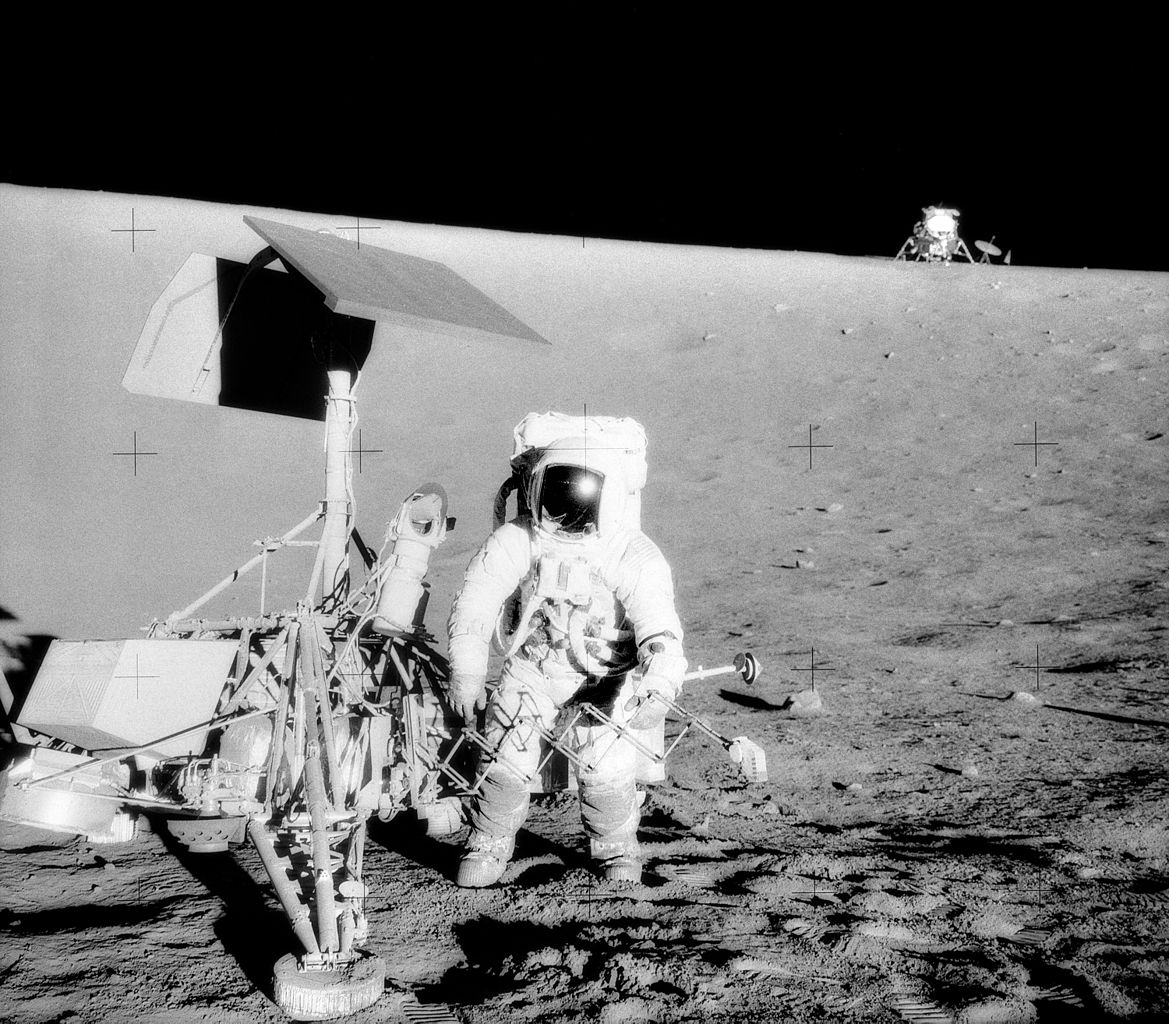 below: Surveyor-3, cropped copy of From here.

Apollo 12 astronaut Alan Bean took this picture of the Surveyor 3 spacecraft on the second moonwalk EVA on 20 November 1969. Surveyor 3 landed on the Moon inside the edge of a small crater on 20 April 1967 where it took pictures and transmitted them back to Earth and performed soil mechanics experiments. The arm of the soil mechanics sampler is seen extended out to the right. The panels on top of the center mast are the solar arrays. The camera is the white cylinder just to the right of the mast. The arm extending upward to the left is the omnidirectional antenna. The spacecraft is just over 3 meters high. This view is looking to the north. 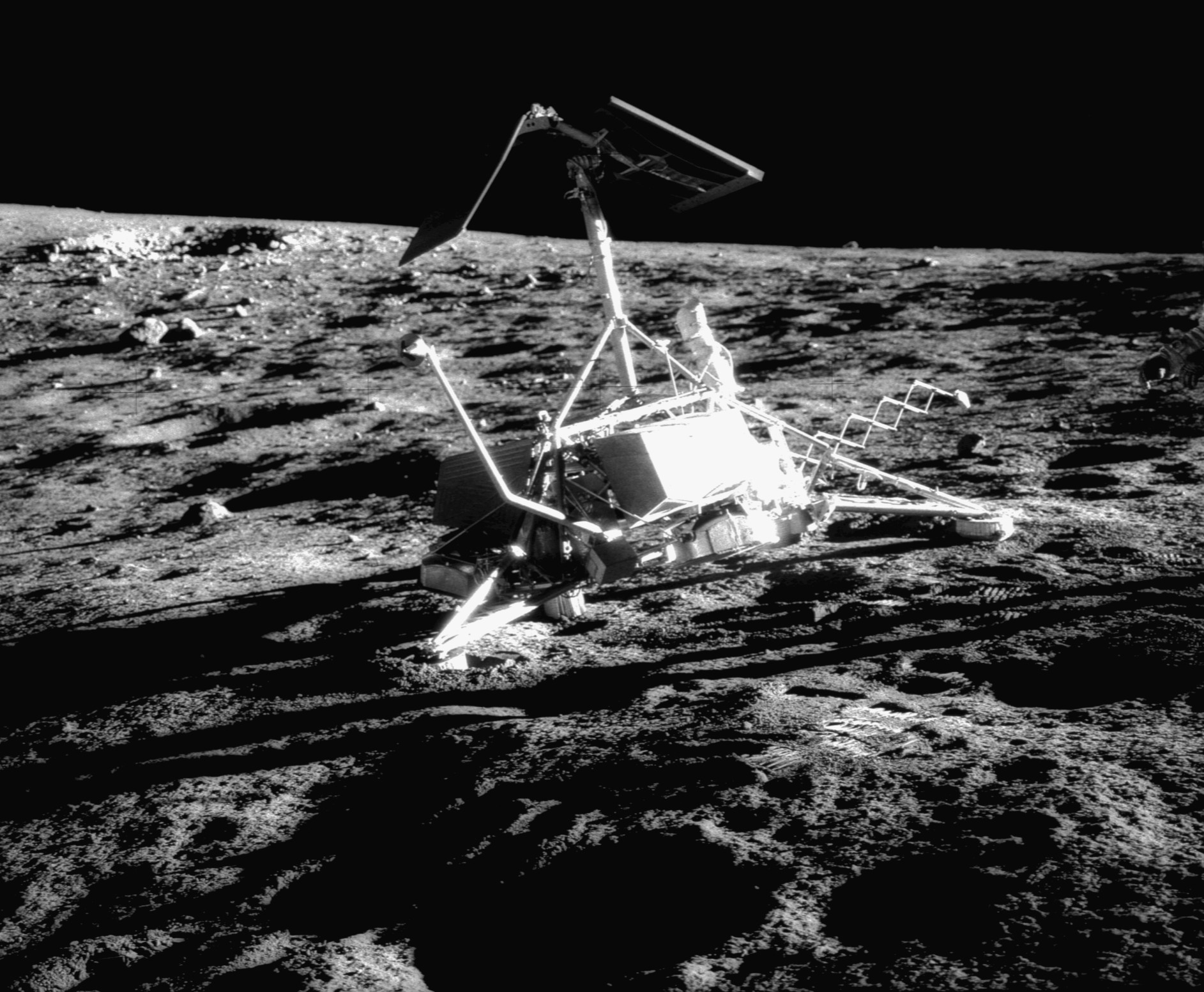 below: Examples of getting out of a transporting craft, walking over to it, taking a picture with it, and (presumably) packing up, getting back into the craft and going home, presumably having done other things as well. 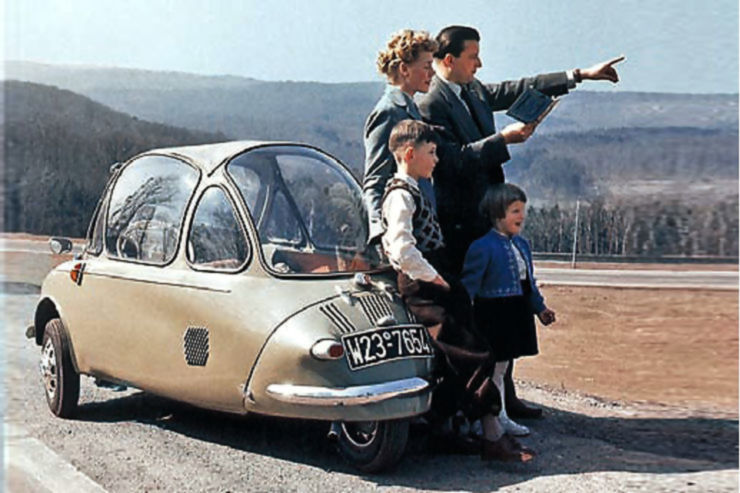 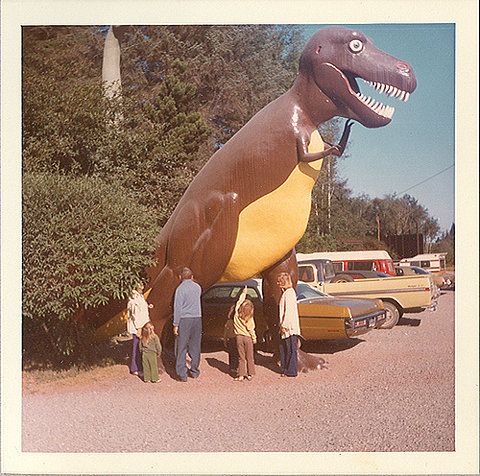 "How was Surveyor-3's location known to such accuracy?"

The Surveyors were located using Lunar Orbiter photography (not necessarily of the probe themselves, just the surrounding area).

All were locateable in this way except for Surveyor V. Surveyor I was actually photographed on the surface itself by a Lunar Orbiter.

There is more detail in the chapter Location of the Surveyor Spacecraft (page 36):

The landed location of the Surveyor III spacecraft was pinpointed (ref. 3-14) on Lunar Orbiter IV photograph H - 125, as were the following eight measured points : Mills 308, Gambart R , Fra Mauro B , Saunder 233 , Lansberg beta, Euclides K , Arthur 3402511 , and Lansberg N. Adopting a similar procedure to that used for Surveyor I , the following coordinates were determined for Surveyor III:

On. the Saunder-Franz system , these would be

(This answer doesn't directly address the question, but it dovetails well with Organic Marble's on-topic answer.)

On the landing approach, Conrad saw and identified "Surveyor crater" very quickly after the "pitchover" maneuver that allowed a surface view out the windows of the LM. This was a 400-foot wide crater inside which Surveyor III was known to be. The crew had trained with both photos and models of the terrain built from Lunar Orbiter imagery, so knew what to look for.

Here are some excerpts from the annotated transcripts; square brackets are official annotations, curly brackets mine:

[Pete is leaning forward, pressing his helmet against the window in an attempt to see the landing site. Figure 4-9 from the Mission Report shows a portion of a view Pete might have had in the LM simulator.] 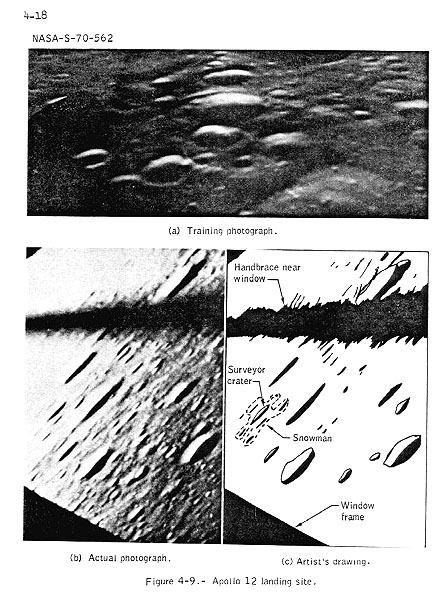 [Head Crater is the large crater just below the top of the image. Surveyor Crater, which is 'his crater', is the larger crater below Head Crater. The bottom left image shows the view at pitchover as seen by the 16-mm camera mounted in Al's window. The sketch at bottom right includes an outline of the Snowman. {the center of which is Surveyor Crater}]

[In the Landing Point Designator mode of operation, Pete can use his handcontroller to re-target the LM. If he wants to redesignate the target, he clicks the handcontroller left or right, forward or back to get a small change; or he gives several clicks to get a big change.]

According to Digital Apollo, the initial, automatically selected landing target would have been about 600 feet to the southwest of Surveyor itself if Conrad had let the P65 automatic landing program have its way. Apparently he didn't like the look of the terrain there, so made a number of landing point redesignations under the automatic system, before taking over manual control at about 400 feet altitude. He wound up touching down about 600 feet WNW of Surveyor. 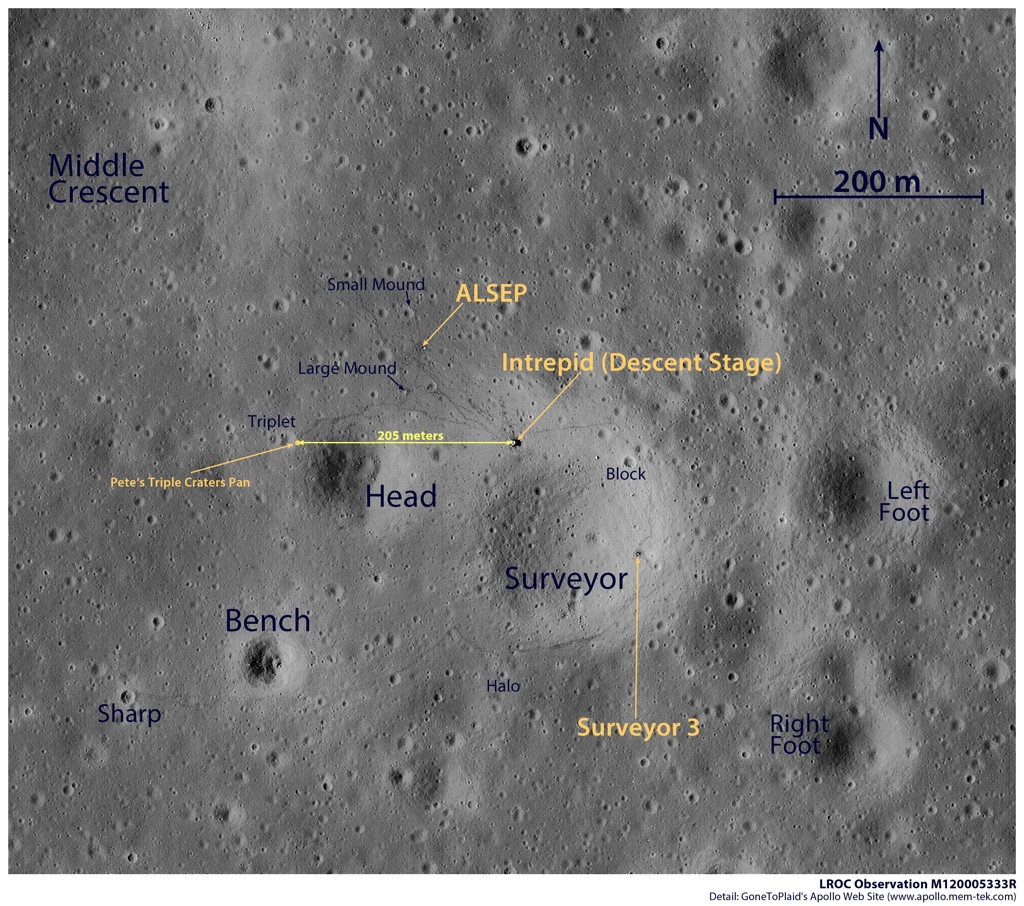 So Conrad wasn't flying around looking for the probe so much as looking for a good parking spot -- he could see he was in basically the right place.

The Lunar coordinates of the landing site were 3.01239° S latitude, 23.42157° W longitude which Ewen Adair Whitaker (who had previously successfully located Surveyor 1 for NASA) designated as 1,180 feet (360 m) from the location of Surveyor 3, a distance that was chosen to eliminate the possibility of lunar dust being kicked up by Intrepid's descent engine during landing. The actual touchdown point was approximately 600 feet (183 m) from Surveyor (Conrad actually landed Intrepid 580 feet (177 m) short because it looked rougher during final approach than anticipated) did cause high velocity sandblasting of the probe. It was later determined that the sandblasting removed more dust than it delivered onto the Surveyor, because the probe was covered by a thin layer that gave it a tan hue as observed by the astronauts, and every portion of the surface exposed to the direct sandblasting was lightened back toward the original white color through the removal of lunar dust. – The landing site would thereafter be listed as Statio Cognitum (a "known anchorage" vital to all navigators) on lunar maps. The story of the role played by Dr. Gerad Kuiper's Team at the Lunar and Planetary Lab in Tucson, Arizona, is superbly documented here: http://www.desertmoonfilm.com/

Ewen Whitaker FRAS (1922-2016) was a member of Lunar Surveyor TV Investigator Team and located landed positions of four Surveyors, including Surveyor 3. He was also a Member of Lunar Orbiter V Scientific Site Selection Team (choosing four of the final list of sites). Having bounced two times on landing (April 20 1967) Surveyor 3 shut down on its first lunar nightfall and at the next lunar dawn (14 terrestrial days) it could not be reactivated. Its TV camera returned 6315 pictures. Thorough analysis of these photos combined with images/selenodetic, radiation intensity, and micro-meteoroid impact data from the Lunar Orbiters enabled to precisely locate the Surveyor 3 probe.

Ewen Whitaker FRAS (1922-2016) was a member of Lunar Surveyor TV Investigator Team and located landed positions of four Surveyors, including Surveyor 3.He was also aMember of Lunar Orbiter V Scientific Site Selection Team (choosing 4 of the final list of sites).Having bounced 2X on landing (April 20 1967) Surveyor 3 shut down on it's 1st lunar nightfall & at the next lunar dawn (14 terrestrial days) it couldn't be reactivated.It's TV camera returned 6315 pictures.Thorough analysis of these photos combined with images /selenodetic, radiation intensity, and micrometeoroid impact data from the Lunar Orbiters enabled to precisely locate the Surveyor probe.I do hope that answers the question and if anyone is genuinely interested in the subject might I again recommend the documentary - http://www.desertmoonfilm.com/

Not the answer you're looking for? Browse other questions tagged lunar-landing spaceflight-firsts apollo-12 surveyor-program surveyor-3 or ask your own question.

27
Why were the Apollo 12 astronauts tasked with bringing back part of the Surveyor 3 probe?
23
What equipment was taken from Earth to the surface of the Moon and back?
9
What was learned from study of Surveyor-3's components, retrieved and returned to Earth by Apollo-12?
3
Which Apollo 12 astronaut is shown examining the Surveyor 3 lander in this photograph?
3
Geolocalizing photographs on astronomical bodies
4
(What happened to the) Plans to visit and/or document sites of previous lunar landings? Are any active now?
2
Better source for the 1967 photograph of Surveyor-1 by Lunar Orbiter-3?
3
Revisiting moon landing sites?

19
Did any of the Apollo lunar modules land significantly off level?
2
Do you recognize these space artists who made this (possibly) first "paint-by-numbers" image of Mars?
7
How was the Moon's first telescope used? (Apollo 16)
6
How "hard" did Apollo 12 turn left just before it landed?
1
Exactly what was Surveyor 3 doing with a spring-loaded boxing glove-like device?
3
Which Apollo 12 astronaut is shown examining the Surveyor 3 lander in this photograph?
11
How did Conrad let Bean drive Apollo 12? Did anyone get in trouble?
21
Why did Apollo 11 land at the sea of tranquility?
3
How did the first manned flight re-entry happened?
4
Did Conrad and Bean balk at entering the 650-foot-wide Surveyor Crater, or just express concern? What data had they seen?