How come we can see nearby galaxies but are unable to see TRAPPIST-1?

You don't need a telescope to see M31. It has an apparent magnitude of 3.4, which means it is easily visible to the naked eye, perhaps even in cities. The reason is that the Andromeda Galaxy comprises about a trillion stars that collectively emit about 26 billion times as much visible radiation as does the Sun.

Compare that to TRAPPIST-1 (the star, not the planets). This is an extremely dim star, about as small and dim as stars can get. TRAPPIST-1 has an apparent magnitude of 18.8, which means that it is inaccessible to all but the most powerful of telescopes. It emits about 1/260000th of the visible radiation emitted by the Sun. Another way to look at it: Andromeda emits about 7 quadrillion ($7\times10^{15}$) more light than does TRAPPIST-1.

With regard to seeing the exoplanets that orbit that star, the furthest out exoplanet orbits TRAPPIST-1 at a radius of about 0.063 astronomical units. At 39.5 light years away, that means a maximum separation of 0.005 arc seconds between the star and the exoplanet. The Hubble Space Telescope's resolution is about 0.1 arc seconds. TRAPPIST-1 and all seven of its exoplanets would resolve as a single pixel.

Trappist-1 is difficult to see because it's not very big. In fact it's so small (~11% the radius, and ~8% the mass of the Sun), that if it were any less massive, it wouldn't be able to support fusion!

Also, the human eye isn't very good at seeing much of the EM spectrum. So it's not emitting much visible light, BUT we can build tools to detect the infrared light that Trappist-1 gives off.

Galaxies on the other hand are big. REALLY big. So big in fact that they contain somewhere on the order of 100 thousand million stars! And of these stars almost all of them are brighter than Trappist-1.

So we aren't really seeing those galaxies in more absolute detail, but since they are so much more bigger, we can see "intricacies" at the star-level

In recent years, astronomers have been able to see (in their words, 'image directly') a few exoplanets. This is one of those: 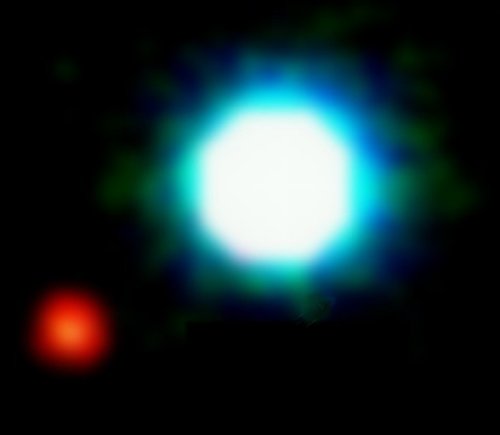 We have found about 2000 exoplanets so far, but we've only been able to directly image 22 of them as of 2017. Most exoplanets are found using indirect methods (e.g. by measuring the star's brightness over time, if there is a regular dip in brightness that may mean a planet has passed in front of the star).

It's difficult to directly image an exoplanet.

In the image above you can see a 'halo' around the star. This is an optical effect: the star's light gets smeared out to a larger diameter than it should be. For many exoplanets, this means the planet gets lost in this halo.

We have spectacular images of nearby galaxies because they're really big. This is the Andromeda galaxy compared to the Moon: 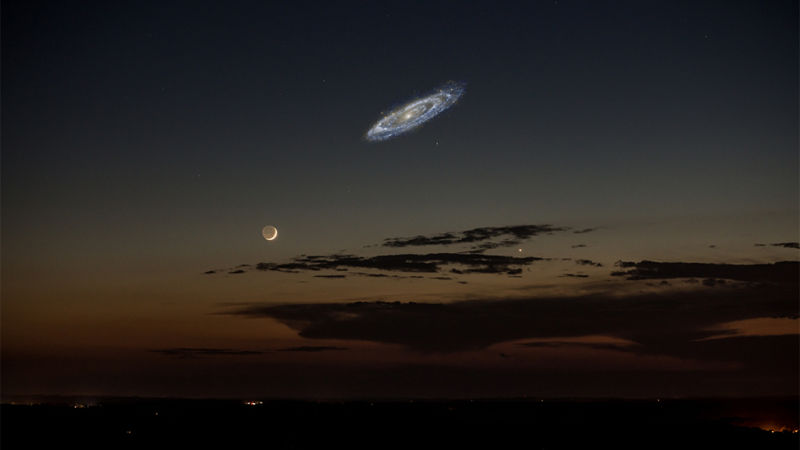 Not the answer you're looking for? Browse other questions tagged nasa telescope trappist-1 or ask your own question.

22
Were the Apollo lunar activities observed from Earth?
-4
Exploration, and research

34
When will we have the technology to directly observe an exoplanet with significant clarity?
0
How would one go about proving humans have really been to outer space?
18
Why does NASA's Juno spacecraft only have a one year primary mission?
11
Finding non-lit objects at light minute ranges
35
Why is it hard to take a high quality image of far away objects (like Pluto) using a high-tech space telescope?
9
A Jupiter-sized star?
4
How will the Voyager 1 manage to generate electricity in the future or even now?
5
How do the small radio receivers on space probes catch enough of a signal to communicate with us?