Why were the two Quindar tones so close in frequency and not apodized?

This and this answer explain the function of the Quindar_tones within Apollo mission comms.

At 2525 and 2475 HZ they are only 50Hz or 2% apart in frequency, and the duration is 250 ms or 0.25 seconds. You can listen to them here (also included here). Assuming the audio is an accurate representation, the abrupt perceived 'click-like' beginning end ending of the tones suggest that they are not Gaussian-apodized or ramped up or down, but just abruptly turned ON for a quarter second then turned OFF.

note: A half-tone, the step between adjacent notes on a piano or other musical instrument with common 'well-tempered' tuning is a twelfth of an octave, or a ratio $2^{1/12} \approx 1.06%$; a difference of 6%. The Quindar tone separation is microtonal, with a difference of 2% or only 1/3 of a half-tone.

Back of the envelope speaking, the tones execute about 631 and 619 cycles during the quarter second, which suggests that if I plotted the spectrum of the two Quindar tones, I'd get two peaks with a separate roughly 12 times larger than their widths. (12 = 631-619) Luckily my life-time supply of envelope backs has not run out (see below).

A 2% shift in frequency could be fairly well distinguished with a pair of centered audio filters with a Q in the 50 to 100 range - a valid Quindar tone would pass through both but be much larger in one than the other. But if there is substantial noise due to crossed signals or other interference common in 1960's telephone lines, there could be some problems. Also there is a possibility of thermal or other drift in component values that might cause these filters to drift.

Question: Why were the two Quindar tones so close in frequency, and not apodized? There must have been some pressure to keep them only 50Hz apart. This is far closer than necessary to fit through the 300-3000Hz nominal passband of telephone lines. Why so close? Some apodization would have supressed the tailes of the frequency distributions so that each tone would have presented less power in the other tone's filter's passband. Why the hard ON-OFF gating?

below: Simple FT of computer generated 0.25 second square-apodized tones of 2525 and 2475 Hz, each with 1 second duration and 2${}^{20}$ samples. (Python is in front of me and I'm too lazy to look up the analytical form.) Left: dB relative, Right: linear scale. FWHM of peaks are roughly 12 times the separation. 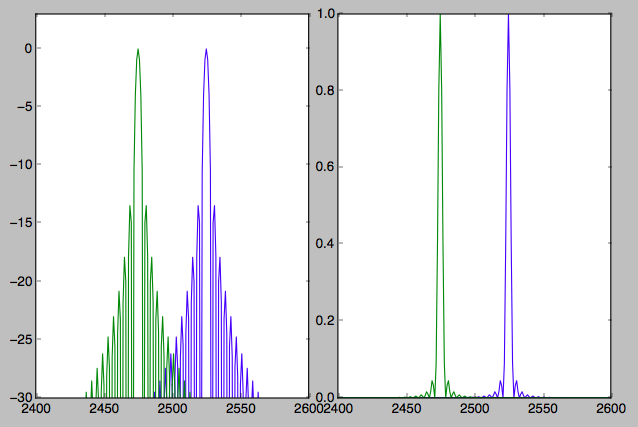 Echo cancellation was by no means perfect, as can often be heard in the Apollo audio tapes. In order to prevent false activation of the telemetry receiver (located at the tracking station) by echoes from the spacecraft, the inband signaling had to be filtered from the uplink. Having MARK and SPACE so close enabled to filter with a single notch filter, suppressing only a minor part of the voice signal.

How come the tones could be heard at all? Quote from here:

"While the Quindar filter removed nearly all of the tones, there were cases where you can still hear a little of the unkey tone turned around. This occurred mainly when the audio was distorted a little, causing more of the tone to be uplinked."

It is often told, that the Quindar tones were used to switch the "transmitter". Apollo used a system called Unified S Band to transmit several channels on subcarriers, and only the voice subcarrier modulation was switched, not the whole uplink signal.

Same source as above.

Detection of the tone closed a relay to connect the Net 1 voice circuit to the Unified S-band uplink voice subcarrier.

Quindar Electronics has filed several patents related to telemetry apparel in the sixties/seventies. One of them suggests, that noise suppression was used after demodulation, requiring fast attack/decay-times on the tones (apodized tones may have been swallowed by the noise suppression). -26dB crosstalk was probably a minor issue, compared to other imperfections due to the poor quality of the leased lines to Guam.

Not the answer you're looking for? Browse other questions tagged nasa apollo-program radio-communication audio or ask your own question.

29
Why were there beeps punctuating the voice communications during missions such as Apollo?
0
What purpose serve the audible “bip” on apollo radio communications?

11
What were the differences between the LLRV and LLTV?
29
Why were there beeps punctuating the voice communications during missions such as Apollo?
4
Why only 12 men have made lunar-walks and not all 18 men?
4
Where were PFS-1 and PFS-2 stowed aboard Apollo 15 and 16, and how were they released?
20
Apollo communication between the Earth and Moon
16
Were there any CAPCOMs who were not astronauts?
2
Power and frequency units used in Deep Space Network XML data?
3
Why did the Apollo lunar suits have two visors?