Why would Space Cube 1.0 have so many On-Orbit Upsets over South America?

I was reading about the Advanced Hybrid On-Board Science Data Processor - SpaceCube 2.0 Space Cube 2.0 and I saw maps of computer upsets in orbit recorded by Space Cube 1.0 on slides 8 and 9. What is going on near South America, why so many upsets there? What's the physics behind the phenomenon? 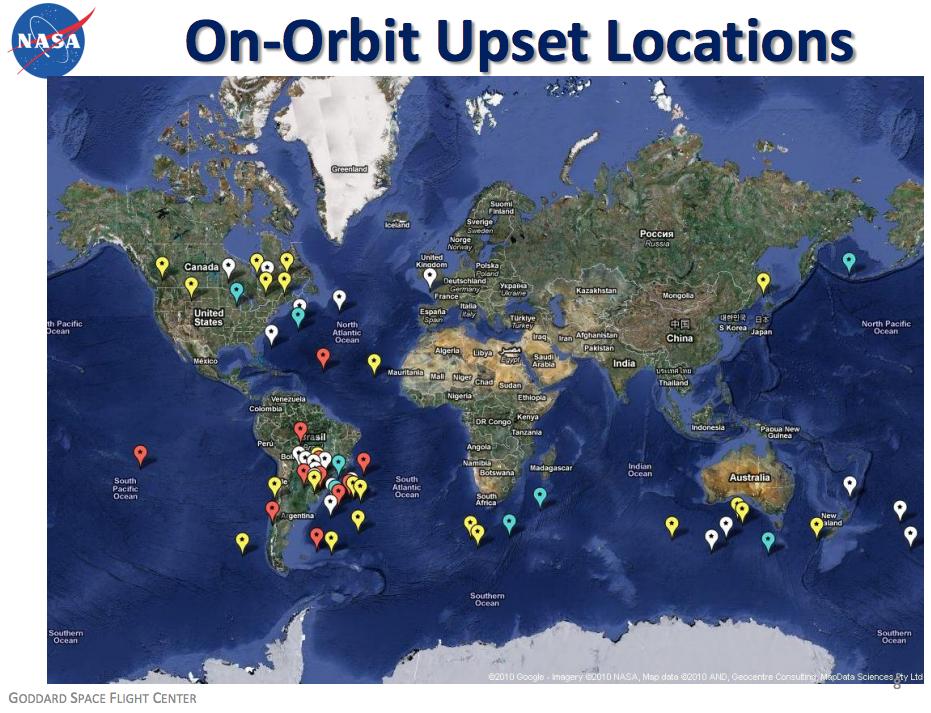 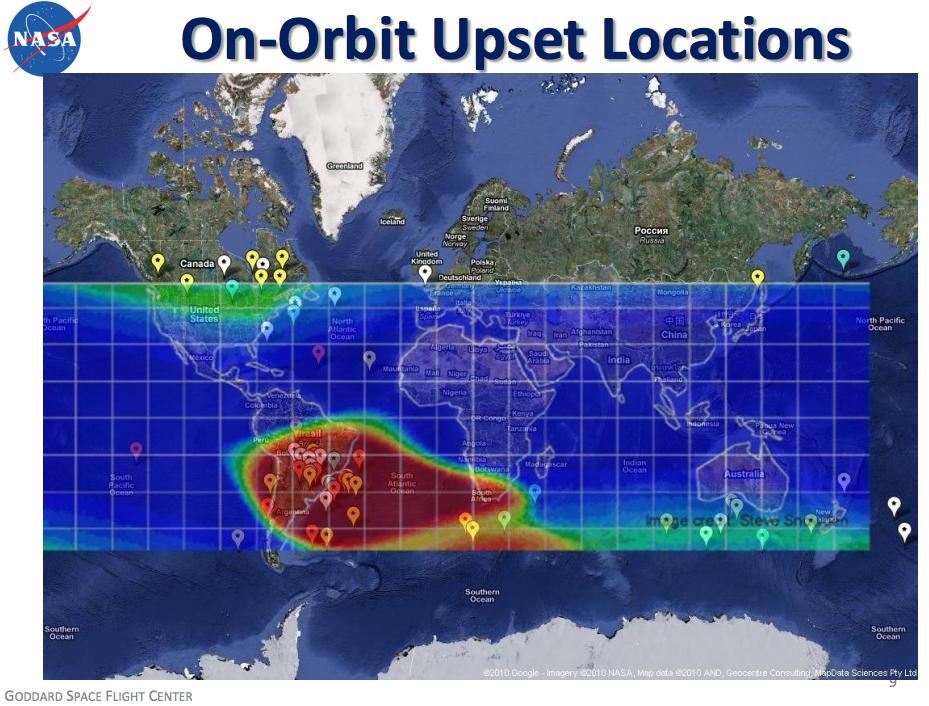 The lower map appears to show the South Atlantic Anomaly (SAA), an area where the inner Van Allen radiation belt comes closest to the surface of the Earth.

From the linked article:

The effect is caused by the non-concentricity of the Earth and its magnetic dipole. The SAA is the near-Earth region where the Earth's magnetic field is weakest relative to an idealized Earth-centered dipole field.

The article gives a good side view showing the asymmetry: 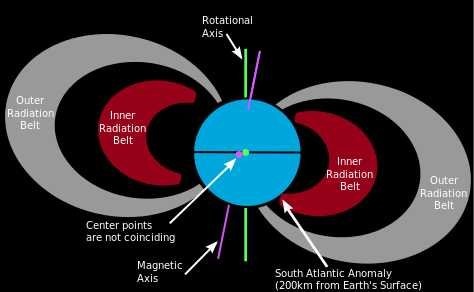 Orbiting objects that pass through the SAA are subject to increased radiation flux compared to other portions of their orbit.

Edit: Here's a picture from my personal collection showing the instructor station of the Shuttle Mission Simulator (from long ago). On the far wall you can see a framed copy of a paper groundtrack map, with the South Atlantic Anomaly marked on it in gray. Wish I had a closeup! But you can see there is no North Atlantic Anomaly. 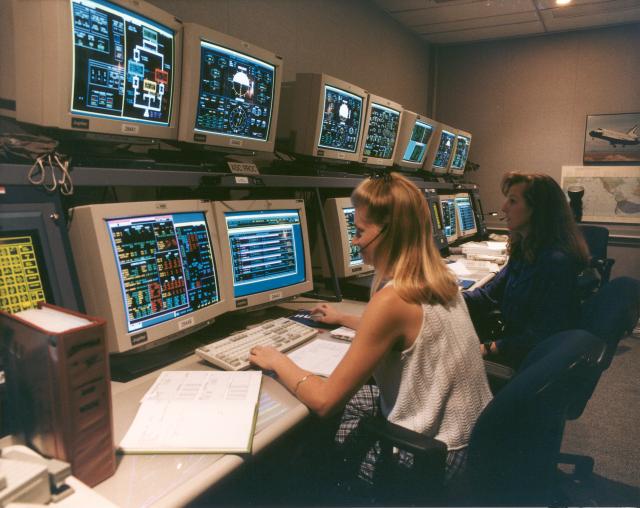 I'm a little late but I've been meaning to add this as a supplement to @OrganicMarble's answer.

Just like the Earth's gravity field, it's magnetic field is lumpy. But the lumpiness shows up differently.

For Earth's gravity field we start with the monopole field or central attraction. The Earth doesn't have a dipole gravity field because that's zeroed out by definition of where the center is. The first correction is the axisymmetric quadrupole field caused by Earth's oblateness caused by Earths' rotation and expresses as J2.

This is well aligned to Earth's equator because it's produced by rotation.

For Earth's magnetic field there is of course no monopole field and the first term is the dipole field. But since there is so much intellectual inertia invested in the idea that the Earth's field is a dipole, instead of talking about higher order terms it's easier to capture the deviation or "main lumpiness" by saying that the dipole is not in the center of the Earth and it's tilted by about 11.5 degrees. 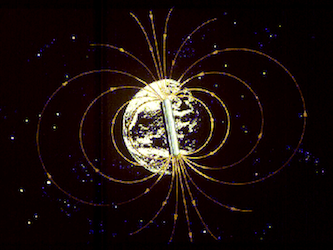 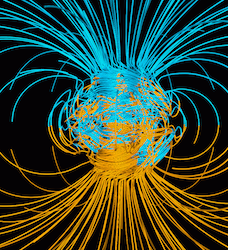 Dipole thinking (left, Source) versus what it is (right, Source)

Did I mention cyclotron radius?

Particles are trapped in the van Allen radiation belts because their low energy keeps them there. As the cycle in helical orbits around the field lines, they reach a north and south extreme where their cyclotron radius based on their energy prevents them from traveling further; all velocity needs to be perpendicular to the field lines. At this point they "mirror" or reflect back and go the other way to put things loosely.

When the field is weak, that mirror or reflection point moves closer to the Earth's surface, as low as about 200 km some times, and that sends the ISS at its nominal 400 km orbit straight through the tail of the inner van Allen belt when it passes through the South Atlantic Anomaly.

@OrganicMarble's answer includes the image below, where you see the "toe" of the inner Van Allen radiation belt on the right side getting close to the Earth.

If you just plot a dipole field tilted and offset by 500 kilometers, you can reproduce the "weak spot" in Earths' field qualitatively. The real anomaly seems to have a different shape and sharper transition, and that's because the dipole model is simply not a good approximation to begin with. It is what it is.

below: plot of an estimate of the field strength of the Earth in LEO based on 11.5 degree inclination and a 500 km offset of Earth's dipole, for latitudes between 50N and 50S; Python.

below: plot of South Atlantic Anomaly an increase in radiation which is correlated with areas of lowest magnetic field strength.

The two plots should not be compared directly as they show very different things. 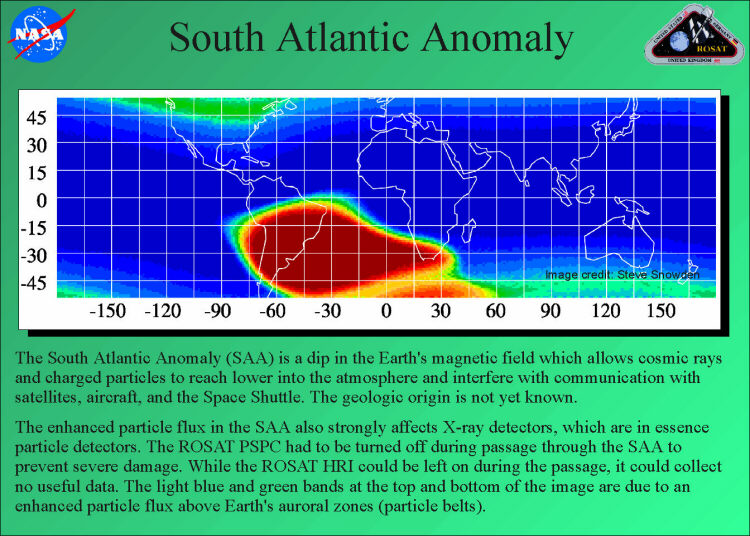 Not the answer you're looking for? Browse other questions tagged low-earth-orbit radiation computing or ask your own question.

26
How will DART be able to hit a 170 meter rock dead-center at over 6000 m/s? What technologies will be use and how will they work together?
22
What is the South Atlantic Anomaly, and what can I do to protect satellites from it?
8
How did the Luna spacecraft collect samples of the moon and containerize them for return to Earth?
6
Launching sounding rockets from the magnetic equator (ISRO's Thumba)
4
Biggest orbital inclination change done in Earth's orbit
2
How will space suit computers likely be radiation hardened?

16
What would the Δv cost of bringing the space shuttle external tank to orbit be?
11
Would a satellite in retrograde orbit have a different speed than it would in prograde?
4
Would the Saturn V have been able to send more mass to TLI if it had a lower earth parking orbit?
2
Why would Juno's originally planned orbit lowering partially mitigate radiation damage?
0
If a cube or micro satellite could collect 1-2 cm space debris in Earth orbit could they be deorbited while raising the sats orbit?
0
Why was the Rossi X-ray Timing Explorer decommissioned in 2012? Why wasn't it deployed another ~100 km higher where drag would have been a lot less?