After reading this question, I understand that it is simpler to replace a space station than to repair it in order to continue its activity. All modules in a space station may not have the same lifespan (I may be mistaken, but a space station take several years to build, and is expected to be in service for about 10 years).

Moreover, it is possible to add modules to a space station. It may be possible to jettison modules as well. Given this, I imagine an old obsolete module may be dropped and then a new one may take its place in order to maintain its mission and avoid building a new space station from scratch. But I cannot find any historical records of such an operation.

It hasn't happened yet, but ISS docking module Pirs is scheduled to be deorbited and replaced by laboratory module Nauka.

The only module(s) that kinda sorta fits this are/were the MPLMs - the Multi Purpose Logistics Modules. 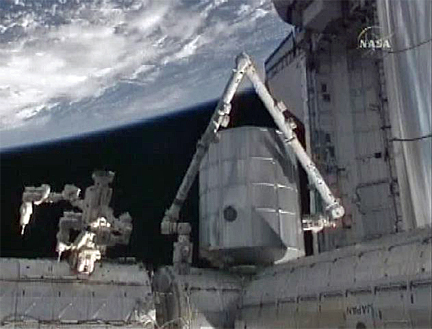 These modules were carried up by the Shuttle full of cargo, berthed to the ISS using robotics, emptied out, and then filled up with trash for the return trip. They were then detached robotically and restowed in the Shuttle bay.

The MPLMs were built by the Italian Space Agency and were named Leonardo, Donatello, and Raffaello. For reasons that escape me, Donatello was never used, but the other two flew 12 round trip missions to the ISS.

Near the end of the Shuttle program, mission STS-133 (Feb 2011) took Leonardo up and it was attached permanently to the ISS becoming the Permanent Multipurpose Module.

Continuing its odyssey, in 2015 Leonardo/PMM was moved from its original "permanent" location on Node 1 Nadir, to Node 3 Forward. This was done to allow more visiting vehicles to be present at the ISS simultaneously.

Here's a super sped up video of that move:

So one could say that Leonardo was attached and removed multiple times, (sometimes replaced by Raffaello) and finally attached and left as an ISS module. Not sure if that meets your criteria though.

The Russian plan for the station, after it is retired by the International partners is to take the new Nauka module (Referenced by Quentin) and its attached docking module (OM) and make those the base of their new station, and grow it from there.

So in that case it is add new modules, and throw away old ones, sort of what the question asks.

No, this has never happened. There's no particular reason it couldn't be done though.

Not the answer you're looking for? Browse other questions tagged iss space-station or ask your own question.

37
Why decommission the ISS?

45
Why does the International Space Station produce so much methane?
13
What kind of leak rates do modern habitat modules have?
12
With one out of two Thermal Control Systems on ISS malfunctioning, how long can Loop B keep up with increased load?
15
Could the space shuttle be permanently left in orbit as a space station?
24
Would it have been any more difficult to build the space station without the space shuttle?
2
Space station Freedom - purpose (specialisation) of pressurized modules
0
Water Compressed on Space Station