Why did NASA set up a computing facility in Bermuda in the Mercury epoch?

I'm reading Hidden Figures, and I'm puzzled by an assertion Shetterly makes in a section describing the first few electronic computers installed at NASA, in the run-up to the Mercury project at around 1959-1960 (p. 209 paperback). Shetterly writes

The agency set up a third computer, a slightly smaller IBM 709, in a data center in Bermuda.

with no further details given. This feels much too early for outsourcing and offshoring of computing operations; instead, you'd really want to keep the computer next to its programmers next to the engineers and scientists they supported. What kind of computations did this facility do, why was it so important, and where can I read more about it? 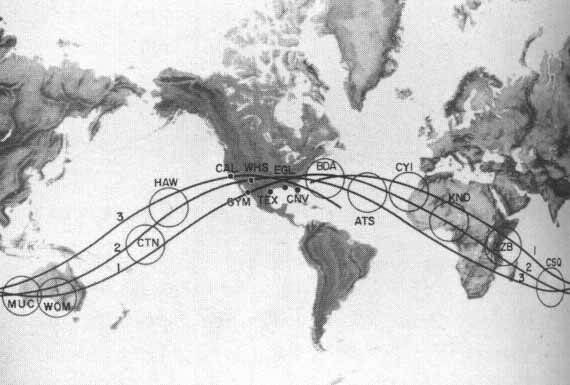 Requirements. Early in the design of the Mercury system it was considered mandatory to receive information on a real-time basis and to provide for instantaneous computation and display of mission data from lift-off to landing. To meet these requirements, new data transmission equipment and computer peripheral gear were required. A new concept in large-scale, real-time data processing was required to tailor computations to a computer cycle and to manage the priorities of the computations performed automatically.

In all phases of the Mercury mission, it was vital that the many different forms of calculations be performed with exact precision and the data be made available almost instantaneously. For example, in a matter of seconds after launch-vehicle cut-off and spacecraft insertion into orbit, the computers were required to furnish data based on tracking information for evaluating whether or not the mission should be permitted to continue.

At the start of the Mercury program, there was no real-time computer link available between Bermuda and the USA, or at least none with enough capacity to transfer e.g. radar data to the US. So they had to make some of the flight control decisions in Bermuda instead of running everything from the US.

Before the Bermuda submarine cable was installed, it was decided to supplement the Goddard-Cape Canaveral complex with a secondary computing station at Bermuda. Installed there was an IBM 709 computer that received the inputs of the Bermuda FPS-16 (radar) and Verlort radars. The role of Bermuda was twofold: it served as a backup remote control center during the launch phase and as a tracking site thereafter. Specifically, it performed the following computing tasks:

After the submarine cable was installed in April 1962, the Bermuda computer was removed and all the computations listed above were programed in the Goddard computers.

Not the answer you're looking for? Browse other questions tagged nasa history computing or ask your own question.

59
Why is the Shuttle Landing Facility runway surrounded by water?
13
Did NASA use metric units for the Mercury missions?
26
What are some specific examples of the calculations human "computers" did for the Mercury space program?
16
Did NASA muzzle Wernher von Braun during the moon landings?
42
Why did NASA use U.S customary units?
4
Where did the Wake Shield Facility end up?
1
How did NASA fund searches for extraterrestrial life before 1993? How were the searches done?
2
Why did NASA divide Expedition 13 into two parts?
9
What DID NASA do with "the world's largest quantum computer"? (re question from 2013)