How was magnetic tape decay prevented in Voyager 1?

I had recently learned that Voyager 1 uses magnetic tape to record data. Voyager 1 has been going on more or less strongly since 1977 (before I was even born!), and the wikipedia article states that the tape recorder is scheduled to terminate working in 2015. That's 38 years! I more or less need to replace my hard drives every 3 to 4 years. So what's the secret of the longevity of Voyager 1's tapes?

Voyager probes use 8-track Digital Tape Recorders (DTR) to record telemetry and scientific data, and they both have error-correction capabilities, with Voyager 2 having a stronger, more error resistant algorithms in place. Quoting Wikipedia on Error detection and correction in Deep-space telecommunications:

Development of error-correction codes was tightly coupled with the history of deep-space missions due to the extreme dilution of signal power over interplanetary distances, and the limited power availability aboard space probes. Whereas early missions sent their data uncoded, starting from 1968 digital error correction was implemented in the form of (sub-optimally decoded) convolutional codes and Reed–Muller codes. The Reed–Muller code was well suited to the noise the spacecraft was subject to (approximately matching a bell curve), and was implemented at the Mariner spacecraft for missions between 1969 and 1977.

The mentioned article goes on to explain that the concatenated error correction code is used combining convolutional code and binary Golay code providing for encoded data redundancy that is decoded by a Viterbi decoder. It also explains that the Voyager 2 is theoretically more error resistant with the use of an additional concatenated Reed–Solomon code (Reed–Solomon–Viterbi) for a very powerful error correction.

The CCSDS [Consultative Committee for Space Data Systems] currently recommends usage of error correction codes with performance similar to the Voyager 2 RSV code as a minimum. Concatenated codes are increasingly falling out of favor with space missions, and are replaced by more powerful codes such as Turbo codes or LDPC codes [Low-density parity-check].

This is possibly a bit overwhelming for anyone not familiar with how data parity, concatenated error correction or cyclic redundancy check algorithms work, though. But we can conclude that using data redundancy and encoding algorithms, data can be decoded and to some extent reconstructed error free with the use of these measures, and any still persisting errors would be detectable. This is however not the whole story. Again quoting Wikipedia, but this time on Telemetry of the Voyager Program:

The telemetry comes to the Telemetry Modulation Unit (TMU) separately as a "low-rate" 40-bit-per-second (bit/s) channel and a "high-rate" channel.

Low rate telemetry is routed through the TMU such that it can only be downlinked as uncoded bits (in other words there is no error correction). At high rate, one of a set of rates between 10 bit/s and 115.2 kbit/s is downlinked as coded symbols.

The TMU encodes the high rate data stream with a convolutional code having constraint length of 7 with a symbol rate equal to twice the bit rate (k=7, r=1/2).

So, while there isn't any error correction in place from the TMO to the DTR (there is however on the DTR itself, as we've mentioned previously), this quote suggests there's two different bit rate streams recorded on the same 8-track DTR. Since there is no way for any track moving at any different speed than the rest of them (being a physical part of the same tape), this means Voyagers actually use two tracks simultaneously and recorded at different data density per track and the telemetry data being the low bit rate recording (and thus lower data density on the tape itself), this should translate to a higher signal to noise ratio of the tape recording and be less prone to data errors that would need to be corrected by previously mentioned algorithms, or in failure of doing that, not deliver telemetry data at all.

Wikipedia quoted bit rates for both telemetry and scientific data of 1400 and 7200 bit/s, respectively. I wasn't able to find any quote on the actual tape used and its declared data density, and the data rate per second doesn't really tell us anything of its limits (it could simply be spun faster over reading/recording magnetic tape heads, for all we know), but I'd suspect having a lot slower than nominal recording speed would have some part in measures taken to prevent data loss and somewhat increase signal to noise ratio on the recording tape itself. On top, of course, of using error checking and correction algorithms with Voyager's digital recordings.

My parents were lucky to get 2 years out of their 8 tracks, much less 30+ years...error correction wouldn't fix the knot they would spew out.

The 8-track 1/4" cartridge audio tape this refers to was notorious for being badly engineered. Many modern tape formats use the same general principle: a single spool that contains an endless loop of tape. DLT, for example. None of them are as unreliable as 8-track 1/4". 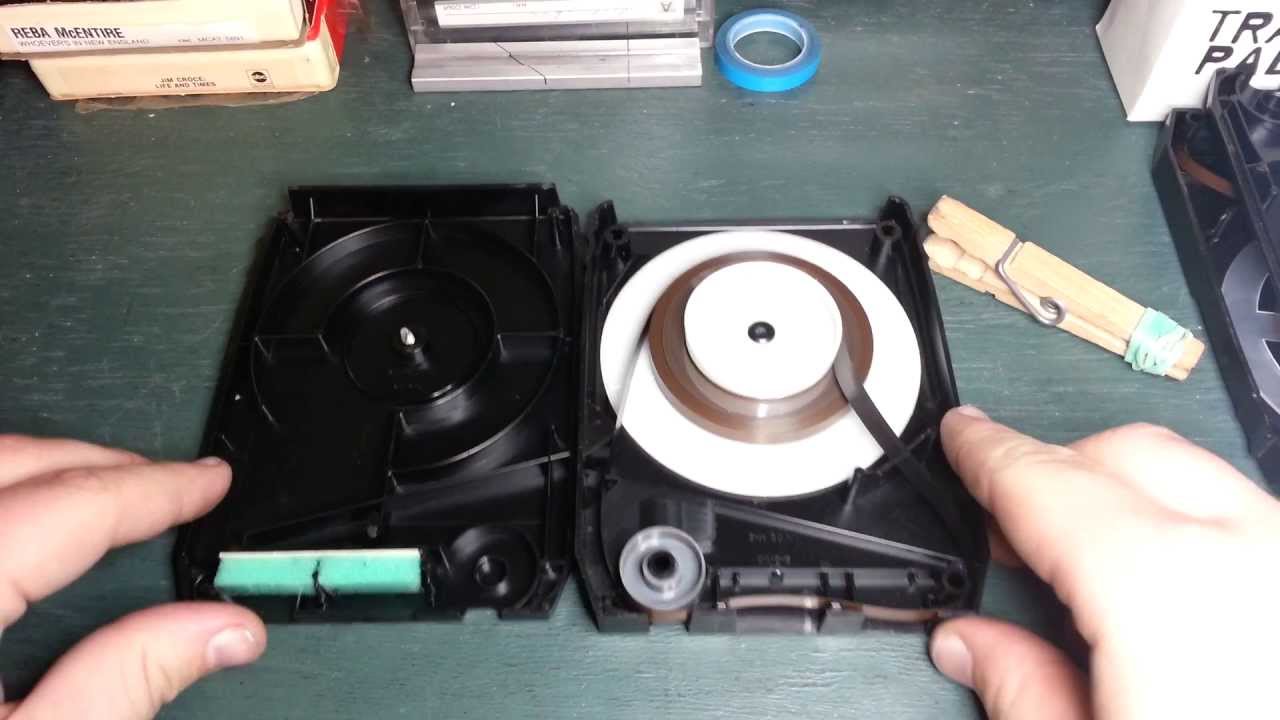 The Voyager DTR used 1/2" tape in a format more like an open-reel tape recorder than an 8-track cartridge. So this avoids the single-spool design and many of its potential problems entirely. This is what the DTR looks like: 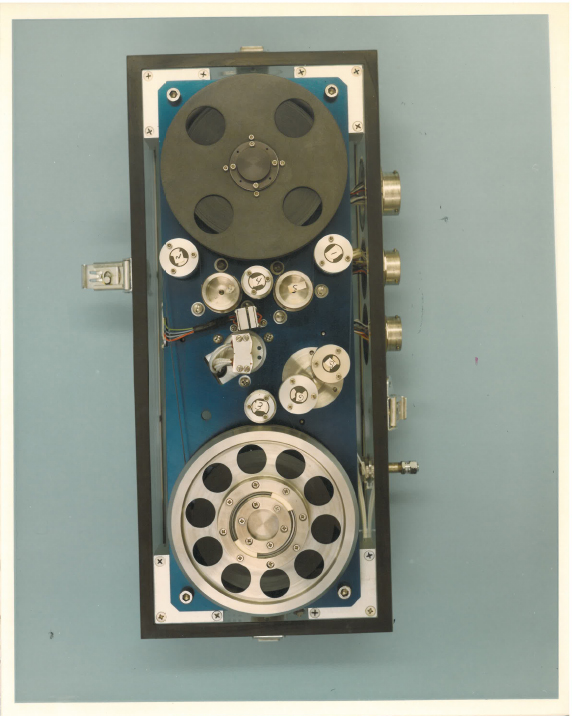 According to this NASA document (PDF):

at each encounter, the flight data subsystem can handle the imaging data at six downlink rates from 115.2 to 19.2 kbps. The 115.2-kbps rate represents the standard full-frame readout (at 48 seconds per frame) of the TV vidicon. Under normal conditions, that rate was used at Jupiter. Full-frame, full-resolution TV from Saturn can be obtained by increasing the frame readout time to 144 seconds (3:1 slow scan) and transmitting the data at 44.8 kbps. A number of other slow scan and frame-edit options are available to match the capability of the telecommunications link.
The data-storage subsystem can record at two rates: TV pictures, general science and engineering at 115.2 kbps; general science and engineering at 7.2 kbps; and engineering only at 7.2 kbps (engineering is acquired at only 1,200 bps, but is formatted with filler to match the recorder input rate). The tape transport is belt-driven. Its 1/2 in. magnetic tape is 328m (1,076 ft.) long and is divided into eight tracks that are recorded sequentially one track at a time. Total recycleable storage capacity is about 536 million bits -- the equivalent of 100 TV pictures. Playback is at four speeds-- 57.6; 33.6; 21.6 and 7.2 kbps.

So only one track is recorded to at a time.

Not the answer you're looking for? Browse other questions tagged probe voyager or ask your own question.

28
Does the tape recorder on Voyager-1 still work?
12
Could Von Neumann probes be forbidden by technological limitations?
18
How does the star tracker in Voyager 1 lock onto a specific star?
4
On which device data gets saved on spacecrafts?
4
An alternative to gold plated record?

29
For how long will the Voyager records remain playable?
9
How will the Voyager Golden Record last for 1 billion years?
21
Voyager 3: what would have been its mission, and why was it canceled?
22
Did the designers of Voyager neglect the angular momentum of the tape recorders?
28
Does the tape recorder on Voyager-1 still work?
3
Voyager 1 tape recorder
6
How does Voyager take pictures in space?
5
How does Voyager 1 keep track of its orientation?
16
How is Voyager 1 still operating?
2
How quick was the solar wind particle decrease detected by Voyager 1?