What is the standard supply target for the ISS?

Every so often the ISS needs to have resupply mission to top off their stockpiles.

What is the full list of items that the ISS regularly resupplies and how much of a stockpile do they try to maintain? IE how much food do they try to keep on the station?

A mission manifest from September 2010 through December 2015 was created using unofficial launch and mission manifests provided by Orbital, SpaceX, JAXA, and ESA, as well as extrapolating launch rates for Progress and Soyuz as of July 2010

Figure 4 illustrates the cumulative raw capacity (total up-mass capacity of all vehicles), net capacity (raw capacity less manifested elements, e.g. ELC, AMS, etc.), and estimated demands for the ISS resupply scenario. The total raw capacity to ISS over the simulation is 245 tons, with 225 tons remaining for resources to satisfy demands. The demands over the same time period total 217 tons, of which 80 tons are for crew provision items (COS 2), 77 tons are scientific payloads for exploration and research (COS 6), 52 tons are for maintenance and upkeep (COS 4), and 6 tons are for waste and disposal (COS 7). Although not modeled, any pre-positioned resources at ISS would effectively shift the estimated demands curve down by a fixed amount no more than the maximum estimated capacity of 35 tons. Analysis without considering these pre-positioned resources focuses on the steady-state supply and demand. Of note, the demands nearly match the remaining capacity during this time period, indicating the projected resupply operations to the ISS maintain a steady stockpile of resources. 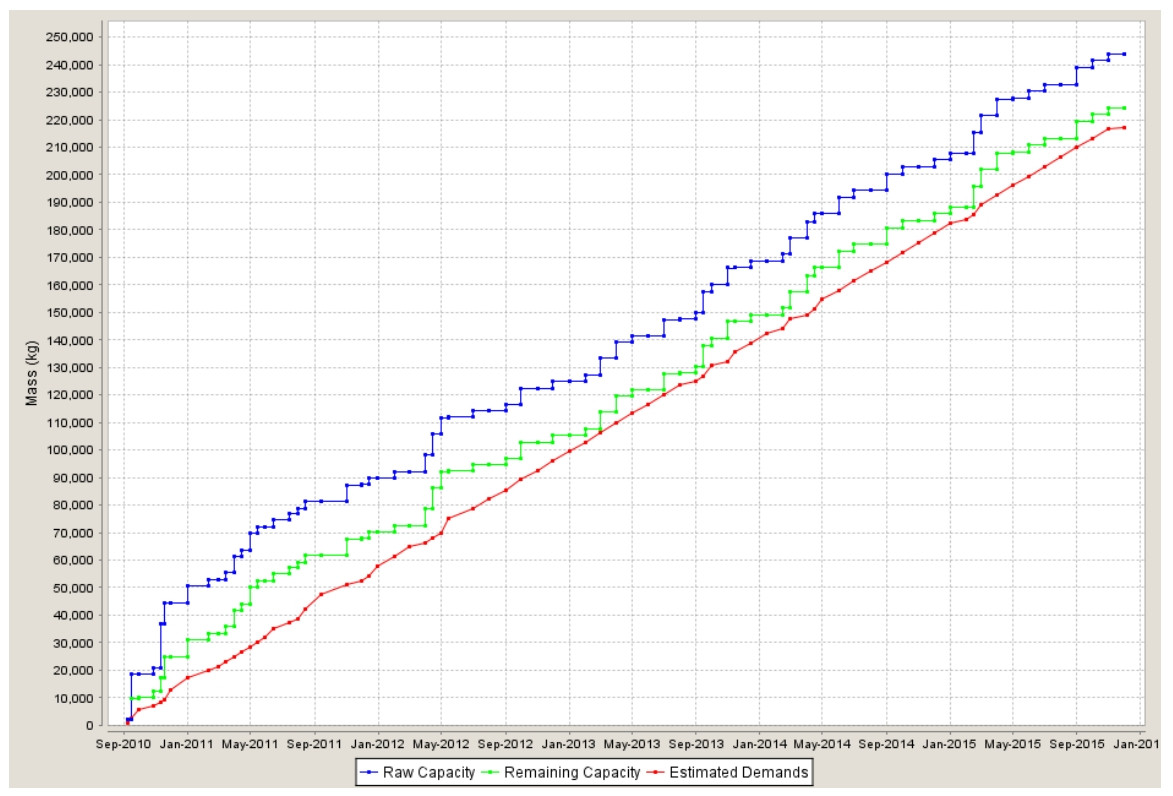 Figure 4. ISS resupply cumulative demands and supply capacity. Between September 2010 and December 2015, resource demands nearly match the supply capacity of all resupply vehicles. Note: demands are aggregated for each launch and do not appear perfectly linear.

Even from a high-level analysis the resupply of the ISS through 2015 warrants significant additional research. As modeled, there is limited supply capacity margin in steady-state, indicating undersupplies of critical resources may be a realistic concern. Steady-state infeasibilities could start to occur with the delay or cancellation of just one of the six resupply spacecraft, however advanced planning given the pre-positioned resources would probably not warrant an emergency. This situation may indeed be realized with the recent (at the time of writing) launch failure of a Progress spacecraft, although immediate focus is on the safety of crew rather than supply of resources for which the existing stockpile is expected to last for many months.

More detailed analysis should include additional demands for propellant required for orbital re-boost and station keeping and differentiate between pressurized, unpressurized and liquid cargo, including the multiple spacecraft configurations supporting differing capacities of each type.

Unless someone has access to these unofficial launch and mission manifests, I don't think you're likely to obtain a more accurate data.

Not the answer you're looking for? Browse other questions tagged iss supply-mission or ask your own question.

12
How much of the International Space Station annual operating costs are due to human crew?
10
Does the ISS medical inventory include a sun-tan/sunscreen lotion/cream?
6
Why does NASA use freeze-dried food for the ISS?
8
Does ISS get a surplus of oxygen or water?
2
How often has (or how common is it for) the ISS's orbit been propulsive lowered intentionally?
4
Would it be possible to Boost ISS to L1 or Lunar Orbit?
18
What typically gets sent to the ISS?