Why do the LRO's orbital elements appear to constantly oscillate - except recently?

I plotted some of the orbital elements of the Lunar Reconnaissance Orbiter from JPL's Horizons database, and I see that there are constant oscillations. The period of the semi-major axis and eccentricity related parameters appears to be about 27.25 days (see last plot), which matches the orbital period of about 27.32 days. The oscillations in inclination however appear to oscillate with twice that frequency.

Why do the LRO's orbital elements appear to constantly oscillate?

Also, are the sudden episodes of very constant eccentricity "real" or just artifacts of splicing/stitching/pasting different simulations together? Even when the eccentricity appears constant, oscillations are seen in the inclination and to a lesser degree the semi-major axis.

edit: I've just added the some history information about the various trajectories that have been concatenated. The "period of calm eccentricity" is from 2016-Oct-21 to 2016-Dec-07 so while it starts in the middle of 558day_20160907_01.bsp_V0.2, it does end on the same infamous date that that segment also ends.

But remember, I'm asking as much about the wiggles themselves as I am their absence. 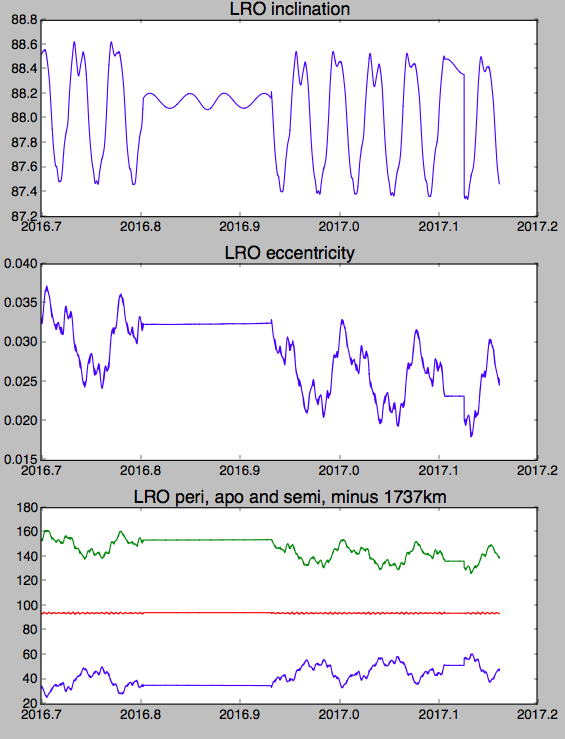 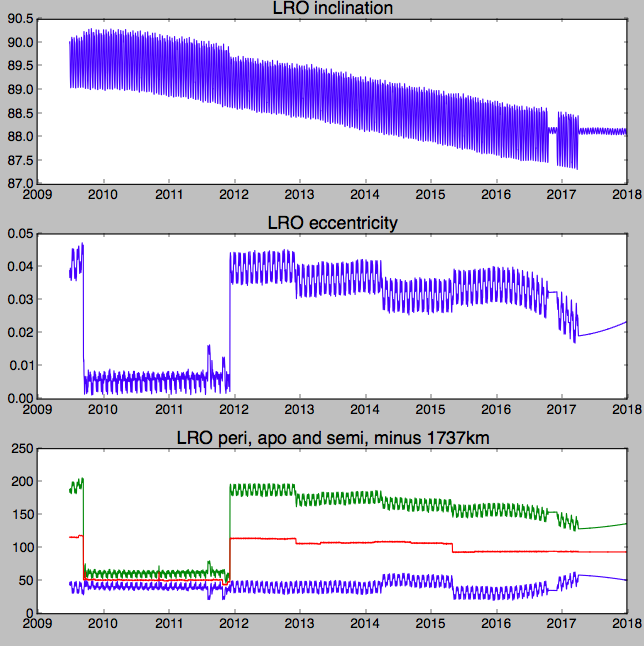 Below: Eccentricity plotted versus time (days) for two intervals shifted by 327 days showing a difference of 12 oscillations. The extracted period is 27.25, close to the orbital period of the moon of about 27.32 days. 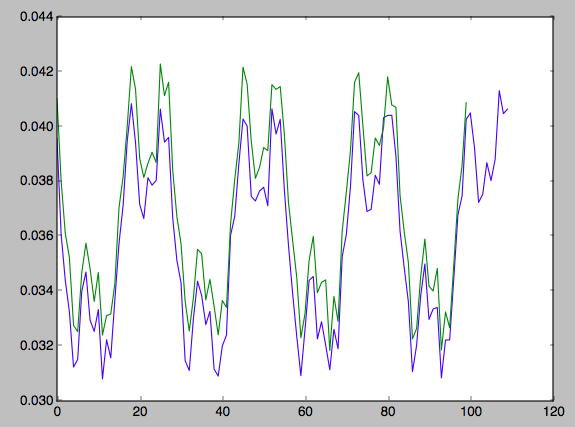 JPL HORIZONS features orbits interpolated from actual data rather than pure simulations. I suspect that what happened here is that there is no orbital data for the three sections of data that don't exhibit the oscillation. We know for a fact that there is no raw data for one of those sections because it is in the future. I spoke to a controls expert and he said my suspicion is probably correct.

When you use the webtool it says there are several data series with all but the first having the word predict at the end of the line. The dates at the end of those data series correspond to the returned oscillation of the data. I suspect that a new data series is begun when contact with the spacecraft resumes.

I believe the oscillation period of ~14 days corresponds to half of the moon's orbital period. Gravitational perturbation by the Earth would then be the main driver of this behavior. The fact that these oscillations occur quite visibly in the absence of real data indicates that the model is doing a decent job of accounting for this perturbation. As for why the amplitude drops considerably, I can't say for sure since I don't know enough about the model used, but I can guess that it's related to the unaccounted for nonuniform density of the moon and non-gravitational perturbations related to its orientation relative to the sun, such as light pressure and outgassing.

Based on some very helpful replies from Jon Giorgini at JPL and a bit of additional reading, I can summarize as follows:

The actual calculation of spacecraft orbits, combining both the effects of gravity and other forces in the Solar System plus orbital maneuvers of the spacecraft itself are combined/reconciled with available radar and telemetry. The result is of course the state vector table.

The osculating elements are derived from the state vectors for convenience only. They are not intended as primary sources of orbit data, and each set of points is only intended to be used to define the position of the spacecraft at that point in time.

For a short period of time while waiting for either more data, or a decision about an upcoming maneuver, an alternate algorithm for the osculating elements seems to have been applied to a short span of dates, resulting in a smoother appearance of some of the plots.

This does not mean they are necessarily less accurate in position, because the elements are only ever intended to be used to define the position near the moment for which they are calculated. The spacectraft's true orbit is not really a conic section at all to begin with, especially considering the complicated gravity field of the Earth-Moon system.

Following the updated calculation, the appearance is back to expected, though this still equally valid.

As for the periodic variations themselves: The monthly and bi-monthly periodicities are manifestations of the reality of orbiting the lumpy gravitational field of the moon under the gravitational effects of the Earth. Since the Moon's orbit is significantly elliptical rather than circular, that strongly perturbing effect is periodic. These effects are made particularly visible in these plots because they are not simple Keplerian orbits to begin with, and trying to express them as such will highlight the difference.

Below is a quick comparison of the derived osculating elements before and after the regularly scheduled update. All is well. 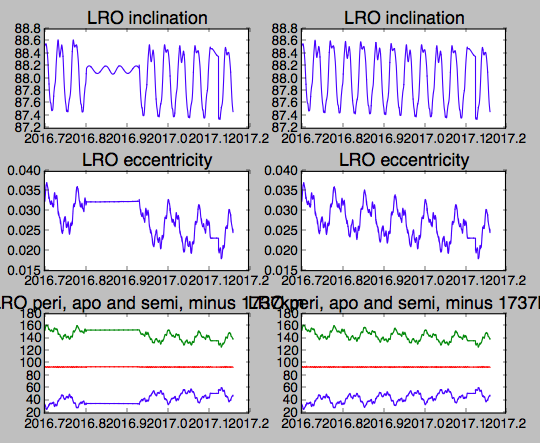 Not the answer you're looking for? Browse other questions tagged orbital-mechanics jpl-horizons lro or ask your own question.

3
How do you Model Hyperbolic Orbits?
15
Is this what station keeping maneuvers look like, or just glitches in data? (SOHO via Horizons)
4
JPL Horizons original reference orbit data for Juno - how to retrieve now that it's been updated?
5
J2 long-period perturbations in the inclination
4
Finding x,y,z, vx,vy,vz from Hyperbolic orbital elements
4
Mars and back, staying only a few days
3
Different results for Orbital Period?
5
How can a meteor gain energy in an encounter with the Earth even though these answers say it can't?
2
Why hasn't DSCOVR's trajectory determination been updated in JPL's Horizons after 2015-Aug-4?
2
Orbital mechanics from Daniel Suarez's book “Delta-V”