How is the space station's interior cleaned?

The ISS is a pretty messy place, as in the image here. I have a cable mess under my desk that quickly traps dust and takes some effort to be cleaned. The ISS is much worse. And it has been crewed constantly since November 2000, by almost 100 persons now.

I suppose the ventilation and its filters takes care of some of the dust, and I can imagine that it is more efficient as a kind of vacuum cleaner in microgravity. But humans have fatty sticky skin and hair that falls off. And there's alot of mixed materials exhaled, we exhale about as much water as we deposit in toilettes. The crew cannot walk but has to grab things with their hands in order to move. Door handles and even light switches in unclean homes are disgustingly tainted by filth because they are often touched.

What cleaning equipment, chemicals and routines are used on the ISS and how much time is spent on cleaning? Spray bottles with detergents might not be a good idea in microgravity since it would end up everywhere, including in the lungs and on the skin of the crew. Swabbing the floor isn't even possible. I don't see images of the crew using hair nets and gloves much, shouldn't the ISS be treated a bit like a clean room?

Is filth an important problem as in threatening the astronauts' health or restricting the life time of the hardware and the station itself? 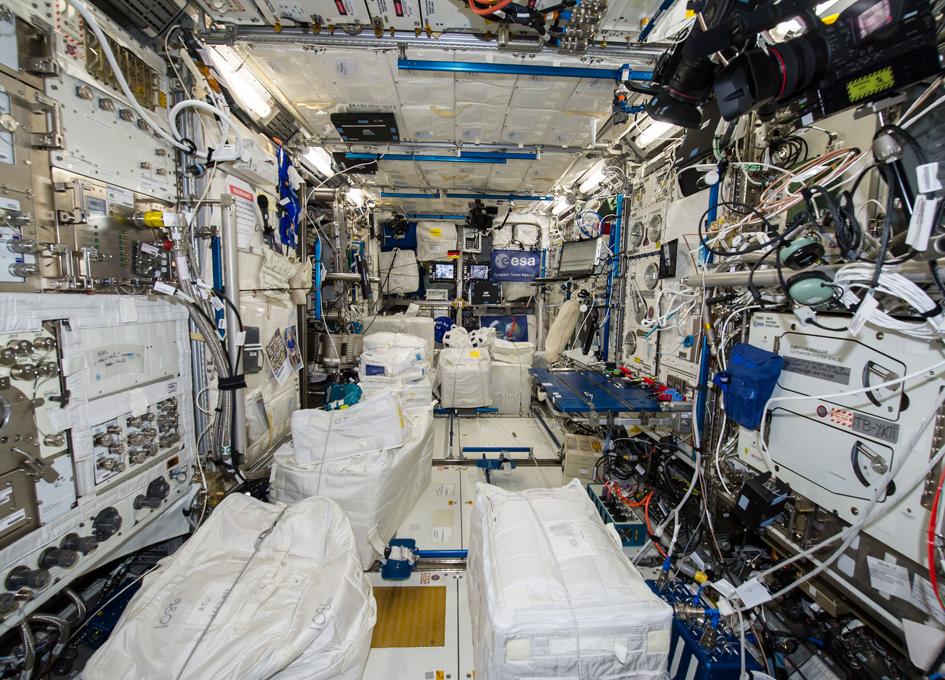 Columbus laboratory on the ISS.

The Space Station's Environmental Control and Life Support System eliminates much of the dust and other particulates from the breathing atmosphere via HEPA filters. It also removes water vapor, volatiles such as ammonia, and of course carbon dioxide.

That still leaves dust and hairs that collect onto surfaces. Every Saturday, every cosmonaut and astronaut is assigned two to four hours of weekly cleaning duties. Many of the tasks we do at home are also done in space, such as vacuuming and wiping surfaces.

Not the answer you're looking for? Browse other questions tagged iss health hygiene cleaning or ask your own question.

9
How serious is a contagion in space flight?
4
How many man-hours are spent on International Space Station's maintenance?
20
Why does the interior of the ISS appear so disorganized?
22
How are hair and beard lengths maintained in space?
33
Can you vacuum out the ISS by opening the door?
23
Why does the ISS cupola have Interior Protective Sliding Windows
2
“grease” like substance in Space
5
How did Skylab's “space shower” work?
7
Concepts for interior color of interplanetary crewed spacecraft