Is there an equivalent to aircraft ATA100 numbering system for Spacecraft?

The ATA100 numbering system is frequently used in aircraft as a common referencing standard.

"The unique aspect of the chapter numbers is its relevance for all aircraft. Thus a chapter reference number for a Boeing 747 will be the same for other Boeing aircraft, a BAe 125 and Airbus Aircraft. Examples of this include Oxygen (Chapter 35), Electrical Power (Chapter 24) and Doors (Chapter 52)."- Wikipedia

Is there an equivalent numbering system for spacecraft and their systems?

I am not familiar with ATA100, but shuttle had what seems to be an analogous numbering system. It was used in telemetry IDs, and I think in work packages as well. I doubt it was used in other spacecraft. 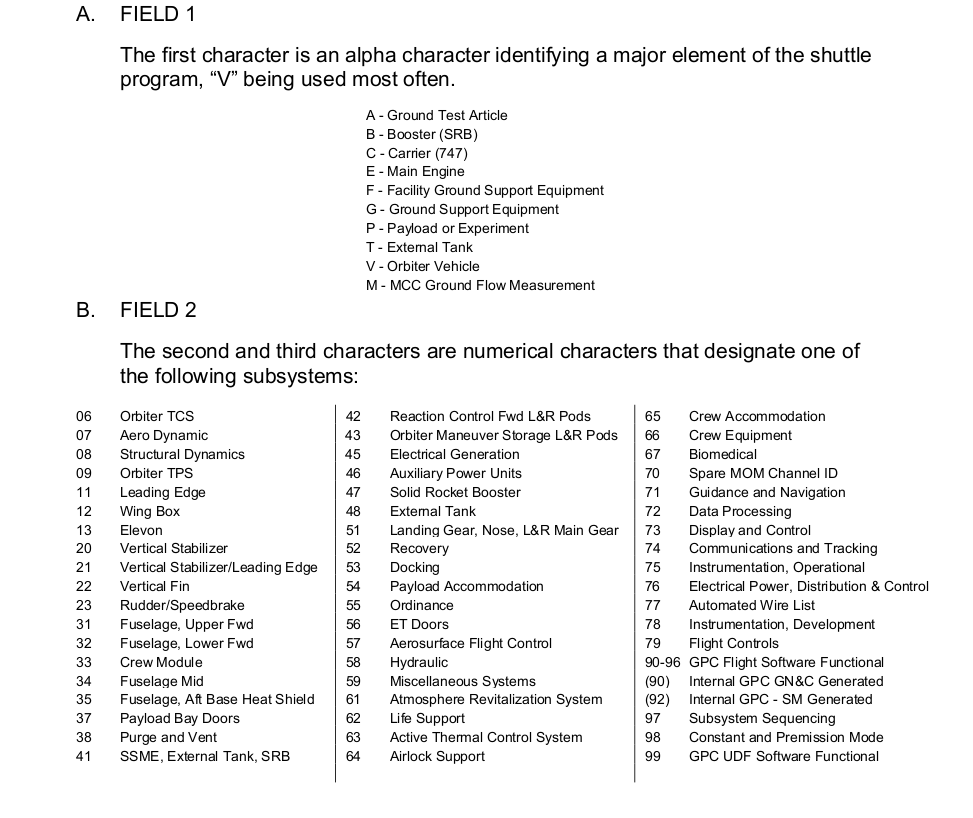 The NAIF Integer ID codes do not apply to Earth-orbiting spacecraft. Instead, the North American Aerospace Defense Command (NORAD) assigns its own identifiers. NAIF maps them as SPICE_ID = -100000 - NORAD_ID.

Other countries may have their own internal designations, and the CCSDS is trying to standardize the methodology.

The answer to your question would be no, there is nothing like ATA1000. Instead, there are many ad hoc numbering systems aiming to consolidate.

Within SPICE, specific instruments are numbered according to the spacecraft:

In the linked page they cite as example the instruments of Voyager 2:

Not the answer you're looking for? Browse other questions tagged engineering or ask your own question.

12
Strategies for combating ESD and ground plane potential shifts on spacecraft charging?
4
Is there a space-certification procedure used by commercial spacecraft manufactures for electronic components?
6
How does a thermal control system of a spacecraft basicaly work?
4
Does the Hubble telescope use a "simple" PID-controller for its pointing control system?
4
How to identify loads for a Payload Adapter System during Rocket Launch?