Why does spinning help stabilisation?

I don't really understand why do we use spin stabilisation for rocket launches?

If I understand correctly, the idea is to make the rocket spin really fast so that any asymmetry in the thrust/aerodynamics will average out and keep the rocket going straight?

Bonus question: How can one provide guidance for such launches? Especially how can they achieve a gravity turn...

I made some researchs since my comment, and especially on rifles:

In firearms, rifling consists of helical grooves in the internal (bore) surface of a gun's barrel, which impart a spin to a projectile around its long axis. This spin serves to gyroscopically stabilize the projectile, improving its aerodynamic stability and accuracy.

On the rifling depends the bullet rotational speed, and figures can go up to 270,000RPM, a rotation speed a rocket will hopefully never achieve.

Talking about rockket, spin stabilization is not communly used, especially during ascent and it has been superseded by three-axis stabilisation.

In addition, it seems that this method is more often used while in space, and I found a very interesting video here (but I did not succeed to put it here embedded).

As you said in OP, the spacecraft is successively spun, fired, and de-spun (a solution to de-spun for free can be a yo-yo de-spin).

Bonus answer to your bonus question: if spin stabilization is not use during ascent but once the payload reaches space, then there is actually no question about how to manage the gravity turn while spining.

This answer answers the title "Why does spinning help stabilisation" rather than specifically for launches.

Before jumping into the answer it is worth looking at the background. With rigid bodies then adding a spin will help average out asymmetries. However neither rockets or satellites are rigid, they contain liquids and flexible appendages and these are both means of energy damping, and means by which energy can transfer from one axis of rotation to another.

The basic ideas of stability in this context (stability is a big subject, even in maths before one tries to apply it to any real object) are that objects that spin can be stable if they spin around their axes of maximum or minimum inertia. Good examples would be the central axis of a coin (like a windmill) and pencil (like a barbeque) respectively.

This doesn't hold for bodies with energy transfer modes from propellant sloshing and appendages. A pencil like rocket spinning longitudinally can, through flexible modes, transfer all of its rotational energy into a rotation about its axis of maximum inertia. This means it will adopt an "end over end" motion. Please note I'm not claiming that its angular momentum has changed here. There is a case of this really happening with an early small launch vehicle (late 50's I think).

If there are flexible modes then the only rotation that is stable will be about the axis of maximum inertial, i.e. a windmill rotation rather than barbeque mode.

Spin stabilisation is used on many satellite designs though in every case the designers have to pay close attention to the shape of the satellite so that it is behaving firmly in windmill mode, i.e. spinning around its axis of maximum inertia.

The early small launch vehicle I mentioned was the Explorer 1 / Juno 1 mission the first US satellite. It was intended to spin at 750 rpm along the long axis but was found to be spinning at 7.5 - 8 rpm which corresponded to the energy having transferred into one of the transverse axes. Its well known enough to be a class room dynamics example. This image below shows the whip antennas which are, I believe, the physical mechanism for the energy transfer between axes. 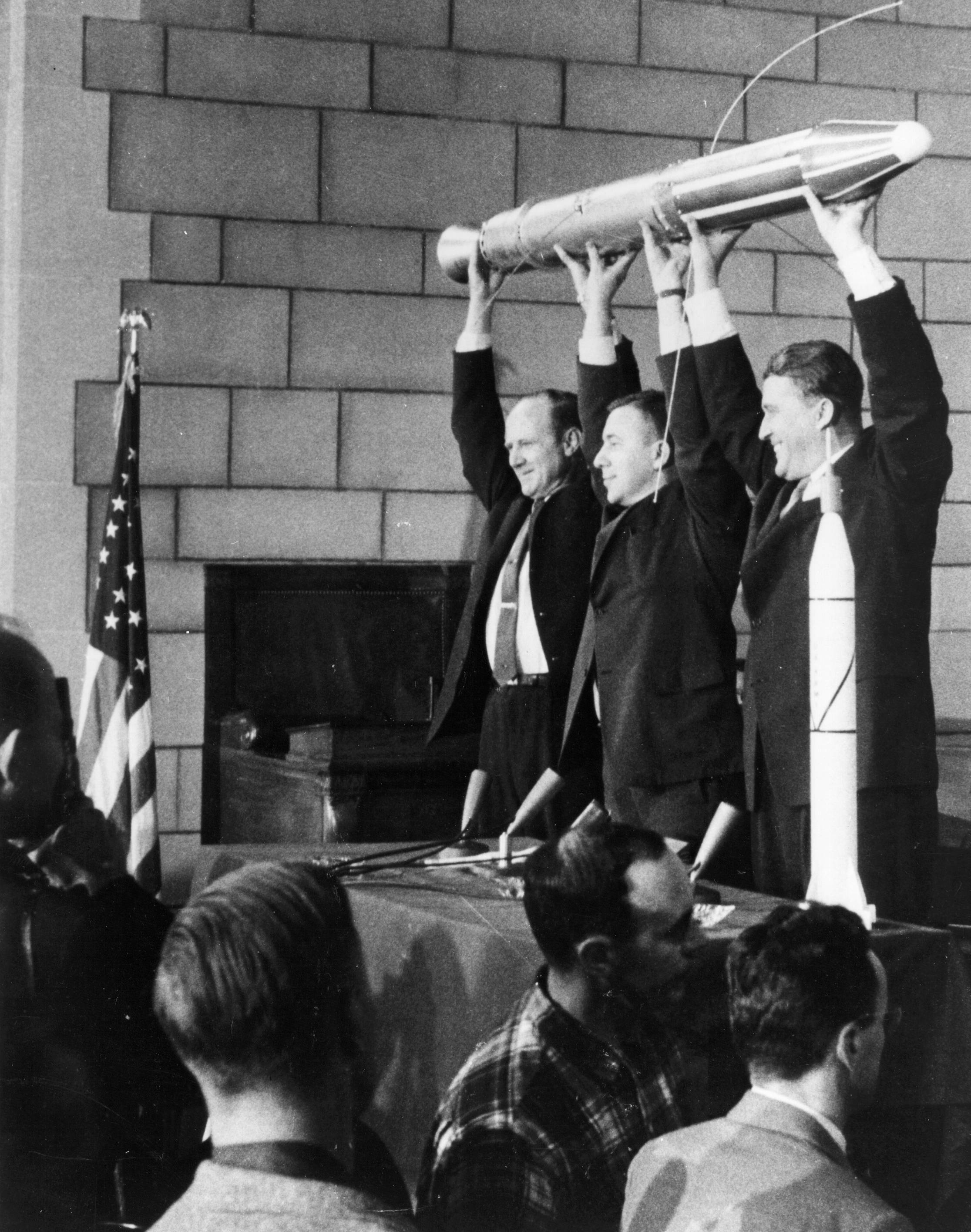 It's counter-intuitive, but true as per the laws of physics, that rotating objects will be harder to change direction in the axis perpendicular to their rotation.

It's the same principle of the bicycle. Almost no one can balance on a stationary bicycle, but, when the wheels are spinning, it tumbles slowly enough to allow a trained human to sense it and shift their weight in time.

A coin will roll on a smooth surface, but will not stay upright on its side if not rolling.

The easiest way to experience it directly is with one of those fidget spinner toys that are in fashion. It takes more muscular effort to roll one around while it's spinning.

The same principle is used in rockets. A given force asymmetry will change the direction of the rocket much more slowly if the rocket is spinning. This gives the control system more time to react.

Not the answer you're looking for? Browse other questions tagged rockets flight-control spin-stabilisation or ask your own question.

1
Spin of the sounding rocket
26
How did the tangential thrusters for the 2014 LDSD test spin-up then spin-down so nicely?
11
Why are spin-stabilized rockets stable?
6
Does a single off-axis thruster firing continuously eventually stabilize attitude gyroscopically?
3
Spin-stabilization of a NASA rover en route to Mars. What and why?
6
How did the upper stage of the Juno 1 rocket change its orientation while it was spinning?
2
Which components do we calculate for center of pressure? Where is the distance of components while computing the cp and cg of a rocket?
0
Why does a spacecraft's attitude become stable when it rotates?

15
Why do pump and pressure fed liquid engines need to operate at high pressures?
12
How far would the STS get without the SRBs
5
What factors are influencing a woosh rocket?
13
Why are rocket launches so loud?
3
Has adjustable Yo-Yo de-spin been tested or demonstrated?
4
Estimate of effectiveness of gravity turn compared to vertical flight
3
Why is hydrogen better than helium as remass?