How does a single SRB control attitude?

The Ares I-X was a test flight from the Constellation program for crewed Ares I-launched Orion capsules. 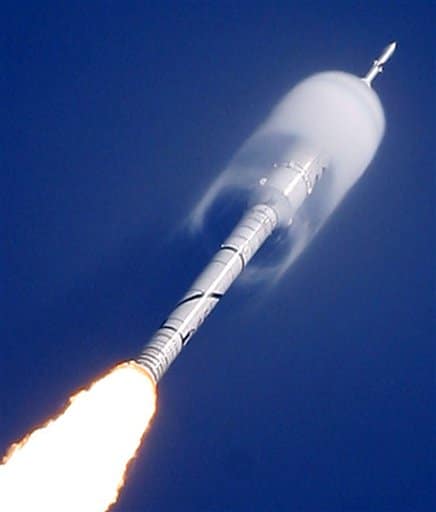 If liquid fueled rocket motors can gimbal, how do solid rocket motor-propelled spacecraft control their attitude, especially when performing a "pad avoidance maneuver" directly after ignition? 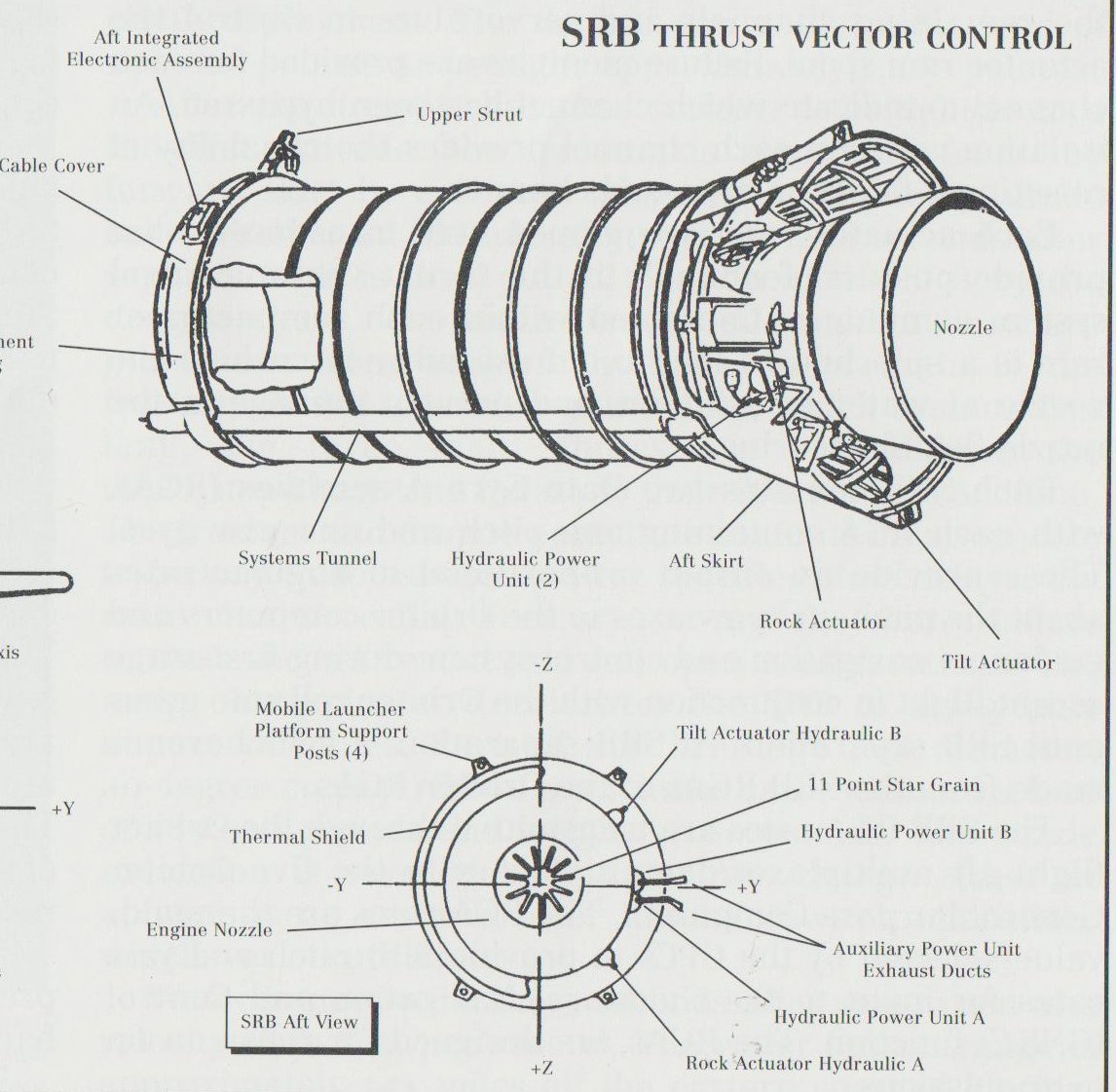 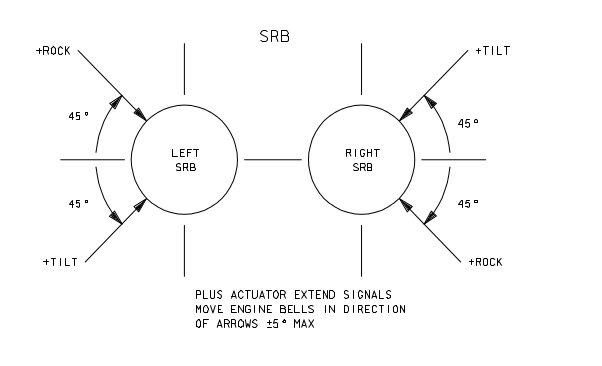 However, unlike the Shuttle system with its 2 SRBs, a single SRB with articulating nozzle cannot provide roll control, only pitch and yaw. So Ares 1-X had 2 unique modules containing hypergolic thrusters (derived from the Peacekeeper missile) mounted on it to provide control in the roll axis. 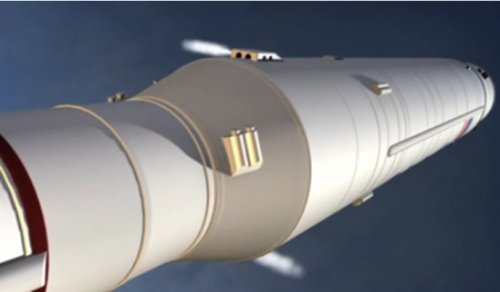 Apart from having an actuated nozzle, an inert gas or reactive liquid can be injected into the nozzle of an SRB to dynamically deflect or shape the exhaust, thereby vectoring the thrust.

ISRO's Polar Satellite Launch Vehicle (PSLV) uses strontium perchlorate from N2 pressure-fed tanks attached on side of core introduced into the SRB exhaust through an array of injectors around the exhaust nozzle. The Secondary Injection Thrust Vector Control (SITVC) system is shown on page 8 of the Oct-92-Mar-93 issue of Space India (view online), and is shown below, where engineers can be seen working on the ring of injectors near the top of the nozzle. 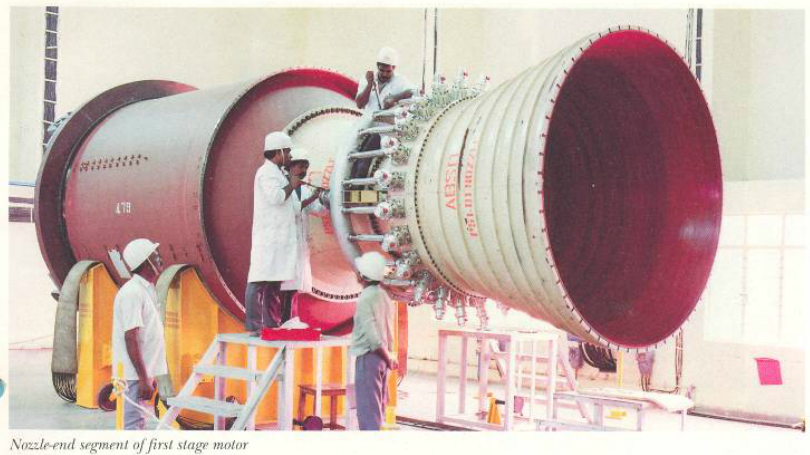 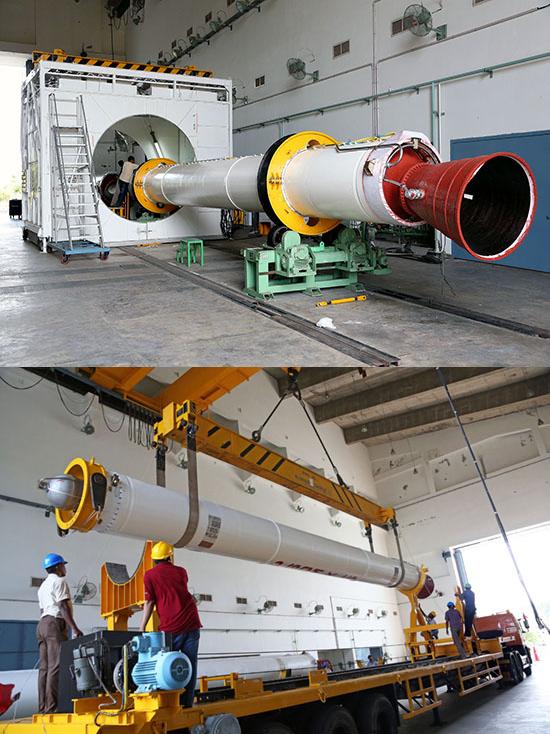 Solid rocket booster nozzles can gimbal. If you take the SRB of the Space Shuttle:

Each SRB had two hydraulic gimbal servoactuators, to move the nozzle up/down and side-to-side. This provided thrust vectoring to help control the vehicle in all three axes (roll, pitch, and yaw).

You will find more explanation on this Wikipedia article, where I found this picture: 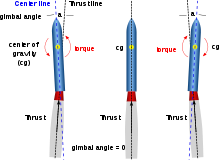 In addition, rockets can board several devices, as:

Not the answer you're looking for? Browse other questions tagged attitude srb or ask your own question.

28
Why does the Indian PSLV rocket have tiny boosters?
20
What was the purpose of the small red tank attached to the Titan-Centaur launcher?
6
Solid state thrust vectoring
6
Is it unusual to vector the thrust from an SRB?
5
What is this black smoke coming from an all solid fueled Epsilon rocket?
4
What is the "baby rocket" attached to the booster on this rocket?
2
Rocket staging by use of strap on Boosters
3
Why are the nozzles on this rocket at an angle?
1
Is RCS a good option to control roll during the atmospheric phase of the launch vehicle?
1
How do single-nozzle staged combustion rockets control roll?
See more linked questions