Is there any money in space?

Currently everything used by astronauts in space gets there via a state/government sponsored lift. Astronauts can also bring a few personal supplies, but I imagine that most if not all financial considerations occur at government level electronically on earth.

If an astronaut has a candy bar, or something else of value that they are interested in exchanging with another astronaut, is cash (any countries' money) ever used in that exchange?

I was fortunate enough to sit in on a talk by astronaut Rick Mastracchio this morning. Among other things, he was a flight engineer for Expedition 38/39, during which the ISS saw the arrival of the first Cygnus resupply capsule to Station.

CRS Orb-1 was originally scheduled to arrive on Station just before Christmas, and the crew was looking forward to its arrival like kids on, well, Christmas. Unfortunately, a fault developed with an ISS coolant system that necessitated a series of spacewalks, causing NASA to stand down the launch of the capsule. It eventually arrived and was grappled on January 12th.

Before these dates were decided, there was betting amongst the crew about whether the repairs or the delivery would win out in the scheduling - Rick mentioned putting a spicy chicken meal on the line (apparently a favorite).

While it's possible this was just a joke, I'd be willing to believe it. Later in the talk, Rick was asked about the food on station - he said that while it was good overall, a 9-day variety cycle across a 6 month stay started to get pretty old. I would imagine that the fresh food right after a delivery is very valuable to the crew.

This doesn't prove that cash is never used in the exchange, of course, but with the crew's basic needs provided for, this sort of wagering is probably about the only time a "money" substitute is needed. And I suspect that the prospect of winning something novel on orbit is much more fun than just putting cash on the line!

Currently this money is not in the possession of any astronauts, but it is none the less money in space. (well, the penny is on Mars, so not exactly "in space"?)

Two US state commemorative quarters (Florida and Maryland) were added to New Horizons "for spin balance". They are mentioned in Coin World here and here. The Florida quarter is notable because it is space-themed and was handed to NASA engineers by Florida's Governor Bush. Actually according to the article it was an entire roll of quarters! The rest were donated as souvenirs to people working on the spacecraft.

"For spin balance, we need to add a number of kilograms to various places [on New Horizons]," explained Stern. "We knew this was the case because the moments of inertia of the spacecraft and the dynamical properties of it, that we would have to trim it out down to literally the grams-level with balance weights. Of course, we had a whole variety of big ones and little ones; you start off with adding a kilogram here and a kilogram there and you end up getting smaller and smaller weights in various places until you're done. We used the coins to that purpose," he said.

A 1909 US penny is attached to the Curiosity Rover's test pattern collection. Read more about it at Coin News. Here is an image of it on Mars:

below x2: Martian dust-covered penny on Curiosity Rover. From here. 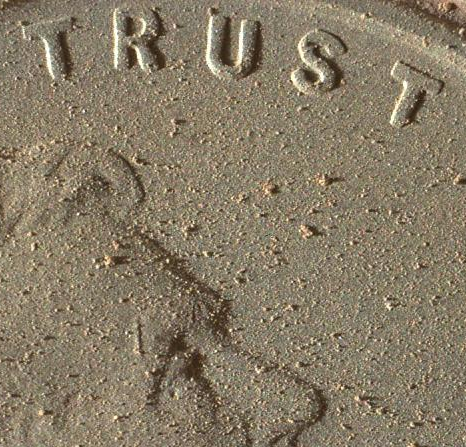 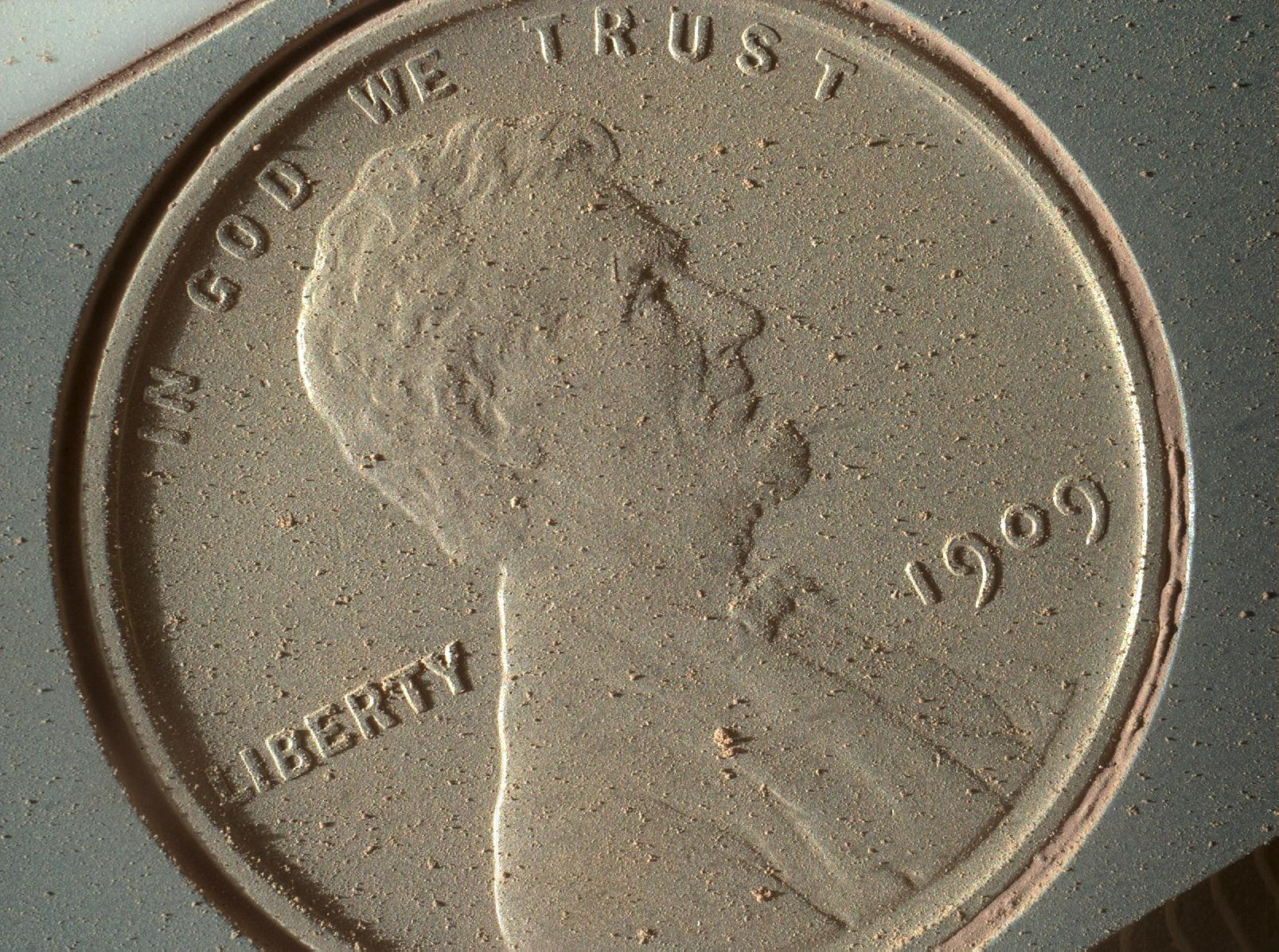 below: Penny on Curiosity Rover. From here. 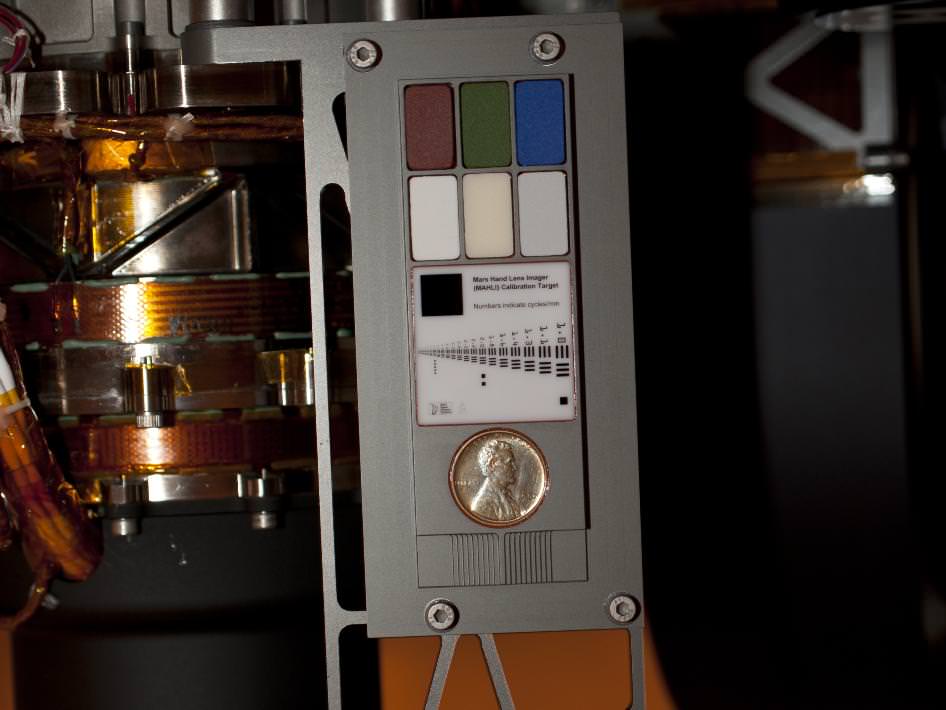 below: Penny on Curiosity Rover's eye chart. From here. 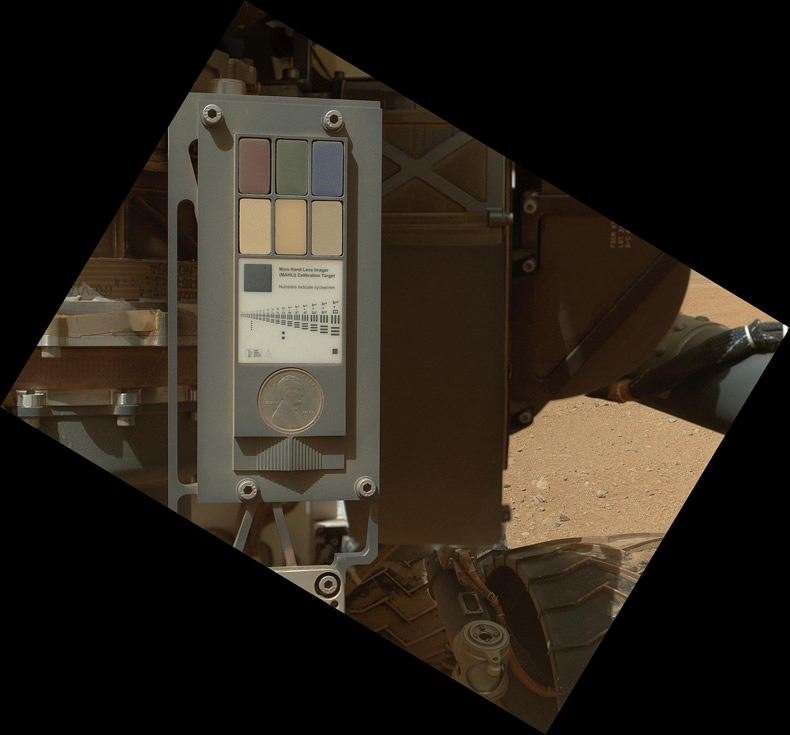 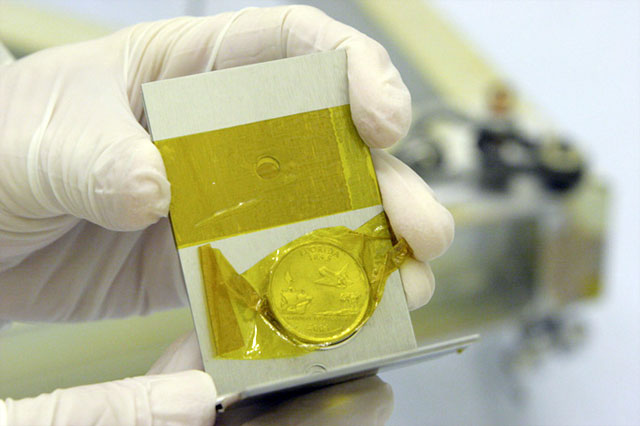 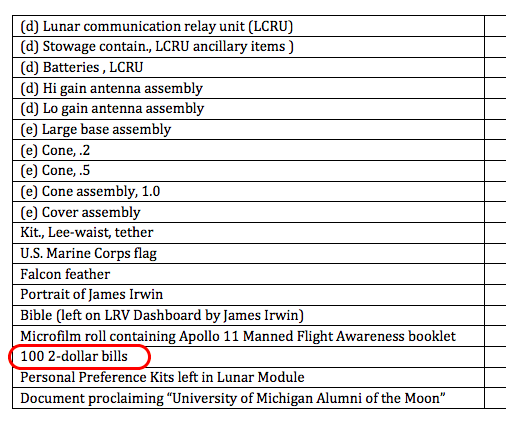 The crew of Apollo 15 took along \$2 bills and \$20 bills within their pilots preference kits (PPKs). This bill is one of the 50 flown US two dollar bills which made it along on the mission in the command module Endeavor with Al Worden, and remained in lunar orbit while Dave Scott and Jim Irwin explored the lunar surface. Another package of bills was flown to the lunar surface, but were unfortunately left there by mistake -- leaving a number of extremely rare \$2 and \$20 bills that have spent the last 40+ years on the lunar surface. The Apollo 15 crew would later become embroiled in a scandal involving flown postal covers, which would impact all future US manned flights in terms of what could be carried in a PPK. By 1973, currency and coins, which could be commercialized on the secondary market, were banned by NASA from being taken along on US space flights -- forever altering the tradition on post-Apollo flights. (Even official NAA flight certification dollars were changed to flown certificates on later flights to comply with this regulation.) After Apollo, only bills flown via Russian Soyuz or private commercial flights (such as SpaceShipOne) would add to the population of space flown \$2 bills.

2
How would blockchain be integrated into spaceflight? Have any methods been proposed yet?
7
Balancing Perseverance Mars Rover; couldn't they just "move stuff around a little" rather than add 6+ kg of dead weight?
3
Does NASA need to get permission or pay royalties for music used in space?
0
Color-correcting photos on Mars so that things look like they would on Earth - is it a big correction?