What is total impulse?

I'm acquainting myself with space propulsion and I'd love a good definition of total impulse beyond just a derivation. Why is it important? How does it related to other key metrics for propulsion systems (like thrust, specific impulse, etc.)?

Also, what are examples of total impulse for different kinds of propulsion systems (chemical vs. electric, for instance)?

I'll expand on @OrganicMarble's answer, it seems to me that the link there to the page on Richard Nakka's Experimental Rocketry Web Site titled Determining Total Impulse and Specific Impulse from Static Test Data is really helpful.

Suppose you have built a rocket engine and you would like to see how good it is, but you don't have an extra rocket and launch crew to test it. You would do a static test, meaning you'd mount the engine fixed somewhere safe, and ignite it. The thing you can measure is the force that the engine produces. The plot in the link (75% size) is what you might record writing down an eyeball estimate of the force every few seconds: 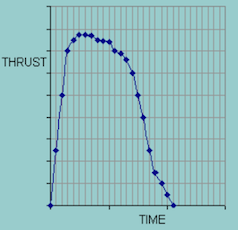 Now suppose you'd like to characterize the engine's performance during this test run with a single number. You can calculate the area under the curve my multiplying each force measurement times $\Delta t$, the time between measurements. That total area is called total impulse, but it depends on the amount of fuel you used for your test. If you use twice as much fuel, the total impulse might be roughly double, but that doesn't mean the engine is better.

So you can divide total impulse by the mass of the fuel used in the particular test. The result is called specific impulse or impulse per unit mass. It turns out the specific impulse is the average effective velocity of the thrust. Traditionally, people divide that by Earth's surface gravity $g$ (about 9.8 m/s^2) and express specific gravity in units of seconds.

Here's a nice example of a plot of force versus time in a static test - nice in the sense of being a realistic example of a test:

I would like to complement the other very good answers.

As you know and as given by NASA's website, the definition of Total Impulse is

Which is, of course, the same equation as the impulse in basic physics.

If one considers the thrust as being almost constant over time, as is the case for many electric propulsion mission profiles and some very long burns of chemical rockets, the definition can be reduced to

where $m_p$ is the total propellant mass. If you consider the Tsiolkovsky equation and substitute in it this new definition of specific impulse ($I_{sp} = I_T/m_p g_0$), we get

where the Taylor expansion of $\ln(1 + x)$ was used in the last term. If we consider now that $m_p \ll m_f$ (as in the case, again, of electric propulsion missions and other small propulsion systems), we can drop the higher order terms and get

Although this approximate relation might not be adequate for any precise estimate of a mission's $\Delta V$, it may serve to get some intuition about the physical meaning of the Total Impulse. We can observe, for example, that if we double the mass of the spacecraft we get half of the $\Delta V$ with the same total impulse.

This answers the part of the question "why is it important" and gives a couple of examples.

This is useful where there is no reference to the thrust level or the payload mass to be carried. This is one of many ways of very roughly comparing launch vehicles or individual stages.

This article gives the following list of examples for different applications.

There is a lot more in the article, including data for many specific examples though it is quite dated, several pages long and needs a careful read for context. As a result I don't think its appropriate to paste it in entirely. Its helpful background.

This relates to the qualification lifetime of an engine/thruster; this recognises that any given thruster will have a wearout lifetime rather than just the limit to the propellant actually carried. This view permits comparison between two candidate engines that might have different nominal thrust levels e.g. 2N and 10N. This can help in a trade-off where it is of interest to see if any of the candidate engines are lifetime limited.

Total impulse is the area under the thrust-time curve.

So examples are not real useful. It's pretty specific to a given launch, or system. If you want one, though, Sutton, 4th edition, p.356 gives the total impulse of the first-stage Minuteman missile motor as 10,830,000 lb-sec.

Impulse is defined as force (i.e. thrust) times time. Since the burn time is dependent on the fuel carried, it doesn't make sense to speak of the total impulse for an engine or a propulsion system; it's most often used for a complete launcher or at least a stage or booster.

Not the answer you're looking for? Browse other questions tagged propulsion electric-propulsion or ask your own question.

7
Rocket Propulsion Elements: Total Impulse Problem
3
Electrical Propulsion Thrust
14
What is the "specific impulse"?
5
What is the difference between "Air-augmented rocket propulsion" and "integral rocket-ramjet propulsion"?
1
Looking for fuel mass per kg payload data for Ion drives
7
Have light gases like hydrogen or helium been explored for ion propulsion?
1
What are all the kinds of electric propulsion that don't qualify as ion propulsion in standard spaceflight lingo?
6
How much of the world's xenon has been used in spaceflight altogether? Is it a lot? Did it cost a lot?
2
Estimating thrust and kg fuel for a generation ship's journey to Alpha Centauri
2
Has Demonstrator-1 2021-006BX demonstrated a hydrogen-oxygen combustion engine fueled by electrolysis yet?